All Things Blue are a Los Angeles pysch-shoegaze band and they have just released 'Lully' ahead of their debut album 'Get Bit'. The song itself slowly opens with gorgeous vocals and plenty of originality, adding some refined musical accompanyment. ===== llawgne (aka Mathias Engwall) shares 'Reverie Neverending' a song that is smooth flowing dream pop with a hint or two of showegaze, the melodic hooks making the piece really stand out. ===== From Flight Attendant we have the new track and video for 'Comedy Show'. The Nashville based quintet serve up a song that builds both musically and with intensity, it's a little dramatic and very enticing, the video conveys all of that. ===== Palberta return just over a month since we featured 'Before I Got Here' with another new song and video for 'Corner Store'. Once again the vocals and especially the harmonies are notable and the stripped back music complements well. 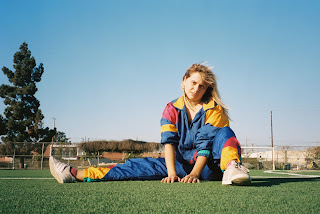 Los Angeles pysch-shoegaze rockers All Things Blue have released the latest taste of upcoming debut album Get Bit, in the shape of contemplative new indie-ballad "Lully".

The project of singer-songwriter India Coombs (aka Blue) and guitarist Jon Joseph, All Things Blue’s new album Get Bit follows a series of hype-building EPs and singles, tackling the personal and the political with equal vigour. “I feel like everybody has a spaghetti brain,” India says. “In one moment you're talking about politics and what's going on in the world, and then the next moment you're thinking about somebody that you really like. It’s the ups and downs of the human brain.”

New track "Lully" leans more toward the political, with India zooming in on cotton plantations in Arizona and putting the magnifying glass on environmental sustainability.

India Coombs said: "My brother sent me an article about farms using flood irrigation on their cotton crops in Arizona and how unbelievably wasteful it is. Cotton is the most widespread profitable non-food crop in the world and its current production methods are completely environmentally unsustainable."

Taking inspiration from the weirder, psych-leaning corners of indie-rock, and especially Aussie psych legends Pond, whose latest album Tasmania tackles Australia’s own brand of climate change-related horrors, Get Bit brings together influences from across the guitar music spectrum. “Tipsy” is a loose, lo-fi romp that recreates the feeling of its title, while “Buddha and Penelope” is a woozy slice of psych-pop. Then there’s “Scratch,” a blistering 40-second tirade against unrealistic expectations, which sees All Things Blue bare their teeth and take cues from gutsy garage rock.

Traversing genres and sounds with impeccable clarity, Get Bit is an open, giving record that allows and beckons listeners to make their own interpretations, and get whatever comfort and validation they need from its songs of rage and love. In an era of oversharing, the album is a tonic with which to use your imagination, project yourself onto, and take these songs into a whole new world.

India and Jon originally met in LA at the age of 18, having both independently moved to the city; Coombs driving across the country in her broken down pickup truck from Philadelphia, and Jon hailing from further south in California. The pair wasted no time becoming friends and firing out an eclectic assortment of demos. They did so namelessly for some time, but eventually settled on "All Things Blue”. 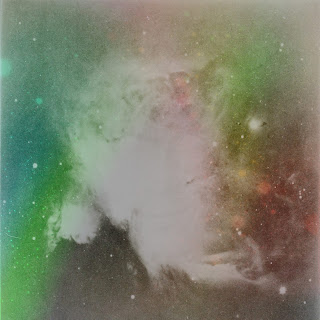 ‘Reverie Neverending‘ is the exciting first single from Mathias Engwall aka llawgne’s upcoming 2021 album Nevereverie. A classic shoegazed dreampop song, Mathias explains ‘Reverie Neverending’: “its about waking up one day and realizing you've been practically living in a daydream all your life. You discover that everyone around you has been living in the real world all along, and are miles ahead of you in their lives.”

“In your romantic mind you were the protagonist of the movie, but in reality you didn't even get cast in it. And, most importantly -there is no movie.” “I wanted to convey this with a kind of a mildly euphoric but also melancholic wall of sound - think Tom Petty and Deehunter mixed with a classic Swedish indie-vibe”.

llawgne is the brainchild of Gothenburg's Mathias Engwall who had early praise from first 2019 single, ‘The White In Its Eyes’, a dreamy pop song that found its way onto the PSL Top 20 and several major playlists.

A showcase of ambitions for strong melodies within soundscape balanced with beauty and noise. The previous single ‘Love + Somebody’ was described as "Sonic Youth meets Chris Isaak", getting buzz from Savantmusikmagasin, Hymn, We All Want Someone To Shout For and more. Mathias also works as a record producer, mixer and mastering engineer in Sweden. He has done remixes for Loney Dear, and recently collaborated with David Ahlen. 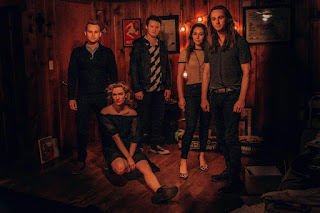 Nashville based quintet Flight Attendant have just issued a video for their dark and sensuous new single, the ironically titled ‘Comedy Show’. Released to coincide with the ongoing election circus in the USA, the song is a sombre, melodic and thought-provoking ballad with a lyric that comments on the current social and political landscape in their home territory of Nashville TN where they will be performing on Sunday.

Flight Attendant lead singer Karalyne Winegarner states that the song "serves as a gentle warning to not lose sight of what’s important in a world filled with so many distractions. The song is supposed to remind you that the easier road of plugging up your ears and laughing your problems away is a temporary fix that won’t hold. The line ‘There’s a ghost from tomorrow’ is a warning to get our heads out of the distraction box and take a long look at our world and ourselves and start changing and improving the one life and world we have to live in. This song is close to our hearts as a band and I couldn’t think of a more perfect time to release it than when the distractions seem to be at their loudest."

A video for ‘Comedy Show’ switches between Winegarner distractedly watching the endless gabble emanating from a TV screen and scenes of her walking through sumptuously colourful woodland to a river in which the band can be seen immersing/cleansing themselves.

Displaying wide-ranging influences that span from Lana Del Rey to Vivaldi, Flight Attendant established themselves locally via a series of ecstatically received live performances prior to lockdown, while the June 2020 release of anthemic single ‘Man Of Chaos’ saw them begin to gain international acclaim via a number of excellent reviews.

The band is currently hard at work creating their debut album with Grammy winning producer Charles Yingling to be released in 2021 by Moraine Music in association with Membran. 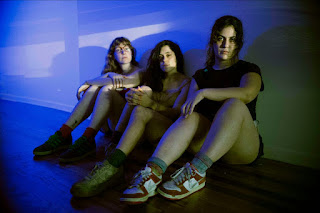 Last month, the beloved NYC trio Palberta returned to announce the follow up to their breakout 2018 LP Roach Going Down, with their clear-eyed fifth album, Palberta5000 (out January 22nd, 2021 on Wharf Cat Records). The album was announced with a deep-dive feature on Stereogum that explored the more expansive and pop-forward style on this new release from a band long-heralded as one of the most original and idiosyncratic bands in the East Coast DIY scene. The announce was also accompanied by the release of the single "Before I Got Here," that created a stir even by the standards of critical acclaim that have greeted the band's earlier releases, earning comparisons to ESG and Delta 5 in The New York Times, being described as "everything great about Palberta" on NPR's All Songs Considered, and garnering glowing coverage from spots like Pitchfork, NYLON, Paste, Consequence of Sound and BrooklynVegan among many others.

Now the band are sharing a second single from their new LP, a track called "Corner Store". Opening with just guitar and voices that builds to full band as the band's three members (Nina Ryser, Ani Ivry-Block and Lily Konigsberg) continue expanding and mutating their layered harmony parts in ways both beautiful and bewildering, before eventually casting their instruments aside entirely in an extended a capella breakdown. The track is full of elements that have been common to Palberta's songwriting for some time, but are given a new depth and power here, and a confident display of Palberta's growing mastery over their sound.

"'Corner Store' is a song we’ve been playing live for a while now and has gone through many transformations over time," Ryser explains. "It culminated in this final version once we discovered that it needed an a capella breakdown that would slowly bring us back into the groove. Though it’s a classic Palberta move to fit in a 3-part harmony whenever we get the chance, it felt crucial. This song tells a story about strolling to the corner store, a sacred place we all know and love, on a Sunday afternoon to meet your friend and you see them on the front of the Sunday Times. And once they arrive, you do a double take and say to them, 'hey! No way! I saw you at the corner — I saw you on the front of the Sunday Times!'"