Bear of Bombay shares 'Night Tree' the first single excerpt from his 'Something Stranger', debut EP. Lorenzo Parisini has been creating electronic and dream-wave music for sometime and it's good to hear plenty of his originality and vibrancy is still fresh and present. ===== GIUNGLA has just released 'Walk On The Ceiling'. The project of Milan based artist Ema Drei, this is a smooth, rhythmic and striking track. ===== We first featured Tempesst in July 2016 and a number of times since. Taking a little look back at our older features and noticing the number of hits for their new piece 'Walk on the Water' this would appear to be a real and deserved breakthrough song, it's nice to have been a small part of that journey.

Active in the Italian underground scene since the 90s and after having played at major festivals, sharing the stage with the likes of Mark Gardener (Ride), Lorenzo Parisini now starts a new course characterized by ethereal electric guitars and synth carpets, rhythmic loops and minimal harmonies, giving birth to a very personal hybrid of psychedelia, electronica, shoegaze and new wave.

The obscure electropop ride 'Night Tree' is the first single excerpt from the EP 'Something Stranger' is now available.

Here and there Bear of Bombay music may remind of bands like LCD Soundsystem, Tame Impala, The Notwist and The Vacant Lots; but at the end of the day, this is an extremely original piece of art, remetabolizing new wave, 90s and 2000s indie-rock, contemporary psych-pop, dreampop, shoegaze and indietronica in a very personal way. 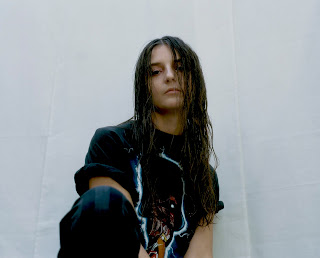 GIUNGLA - Walk On The Ceiling.

GIUNGLA is the project of Milan based artist Ema Drei. ‘Giungla’ means ‘jungle’ in Italian and it’s in this sort of tangled-happy-place, where Ema’s minimal pop songs come alive with in your face attitude.

New single, ‘Walk On The Ceiling’, was recorded in 2019 in London with esteemed producer Andrew Savours (My Bloody Valentine, The Kills, Black Country New Road). “Working with Andy in his studio was cool because throughout his career he has worked with some of the musicians who made me fall in love with my instrument (especially Nick Zinner from Yeah Yeah Yeahs)” explains Drei. “We tried to create a sound that was modern but timeless with a main focus on guitar”.

Collaboration is key for GIUNGLA, an artist who likes to take inspiration from other creative mediums and channel it into her own work. Whilst on the hunt for artwork for her forthcoming E.P, thanks to curator Tommaso Speretta, Ema had the pleasure of meeting with Swedish painter Sophie Westerlind at her studio in Venice where she first saw the painting ‘Martina’s Flowers’. A close up from which would go on to become the cover art for new single ‘Walk On The Ceiling’. “I chose this painting because its brushstrokes, full of matter and movement, immediately felt right for my music, but also because of the story behind it” says Ema.

Before experiencing lockdown in Venice, Westerlind had never painted flowers, but due to the new restrictions she found herself yearning for a connection with nature and flowers became a symbol of that. Thanks to a tip-off from a friend, Martina, Westerlind managed to find a woman who sold flowers and met her in an alley behind Campo Santa Margherita to buy a bouquet. “Before giving me the flowers she wanted me to smell the perfume, then she told me to hurry back to Giudecca as if we had just exchanged something forbidden. While I was walking back to my studio a lady in the street saw me and shouted at me 'where did you find those flowers ?!' Painting them felt like doing something very precious and secret” she explained.

‘Walk On The Ceiling’ similarly presents an intimate and delicate dimension, inspired by late nights spent writing notes and thoughts on her phone, head under the covers and the light of the screen in her hands. “I like to think of the phone light as a candle to be protected and given to someone special” says Ema. “The perspective is upside down, as if those who stay awake at night to write were in another reality; it is about the beauty of looking for a bit of mystery and magic even in a protected and domestic environment, trying to be braver than you are during the day”.
GIUNGLA · Walk On The Ceiling 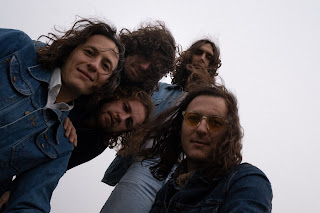 Tempesst - Walk on the Water.

London via Australia folk/psych rockers Tempesst today announce their new single "Walk on the Water", released alongside a stunning new video shot in the mountains of Snowdonia. "Walk on the Water" is lifted from the band's recently released debut album Must Be A Dream, via their own label Pony Recordings.

Directed by the band's drummer Andy Banjanin, the video places the band in the heights of Snowdonia. Speaking on the video, Banjanin said: "We drove up to Snowdonia just the five of us, to hang out and shoot the video last winter. On the first day after we hiked up the mountain with all of our instruments and filming gear, we finally arrive at this incredibly beautiful lake just under Snowdon and set up ready to shoot the first scene. We were on the side of a mountain and I had a remote for the camera so I could operate it from the drums but it was about 50m away. Over the course of the first take, literally the very first shot, the weather changes from clear at the beginning of the song to full blizzard by the bridge. None of us know what to do so we just keep going until the song finishes before freaking out and packing everything up soaked and freezing. We didn’t get any more filming done that day, but it turned out to be the best shot of the video."

A wide-eyed excursion of folk-tinged psychedelia with nods to Spiritualized, Galaxie 500, the Flaming Lips and the Beach Boys, Must Be A Dream is a dense, sun-kissed record that explores themes of identity, purpose, ageing, love, loss, substance abuse, the death of loved ones and remembering the beauty beneath it all.

Now all residing in London where debut album Must Be A Dream was written and recorded, Tempesst have become well known for their sweeping, psych-touched indie rock - touring previously with the likes of Pond, The Temper Trap, Albert Hammond Jr, Jet and widely lauded by the likes of Lauren Laverne (BBC 6Music), Jack Saunders (BBC R1), Noisey, DIY Magazine, The Financial Times, Clash Magazine, NME, The Line Of Best Fit, Beats Per Minute and more.