Melby make their fifth appearance on Beehive Candy with the new song 'Common Sense'. Whether it's indie pop, rock, psych or folk Melby have the knack for creating superbly crafted music the latest single being no exception, it's another beauty from the Stockholm four piece band. ===== Classic Water have released a live version of their song 'Carthage' today. We have including the live and studio original as both versions are beautiful. I guess the easiest description for the song is indie folk however part of me feels it's more than that, whatever the case just enjoy this lovely track.

Stockholm four-piece Melby have constantly been growing since their debut with catchy single 'Human' in 2016. Last year, the band took their biggest step yet with the acclaimed debut record 'None of this makes me worry' which was followed by tour dates all over Europe. The band returned earlier this year with fittingly named single 'Things I Do When I'm Alone' and are now following up with new psychedelic pop single ‘Common Sense’.

The band often gets compared to fellow Swedes Dungen and Amason but Melby’s dynamic sound, with influences from folk, psych, indie and pop, stand out. The quartet's light, semi-psychedelic folk pop is led by Matilda Wiezell’s enchanting voice which fits perfectly with Melby’s unique musical landscape - a sound that's been called "otherworldly, and wholly brilliant" by The Line of Best Fit. The band consists of Wiezell, Are Engen Steinsholm (guitar), David Jehrlander (bass) and Teo Jernkvist (drums) and formed while living together in a Stockholm shared housing.

Common Sense is a new step as well as a development of the sound of Melby's debut, building a dreamy, psych-pop atmosphere and drawing on the more melancholy folk inspired sides that were showcased on None of this makes me worry, without losing the playfulness and sense of melody that always have been a big part of the band's sound.

Melby on the track: “During lockdown we started making music in a new way, recording demos at home and sending them back and forth to each other. Common sense was created like this, and we wanted to keep the strange and messy vibe of the original home recording. We are kind of modest people, so our version of weird and messy might not be the most weird and messy you’ve ever heard, but still. I think it’s got a bit of an edge to it?” 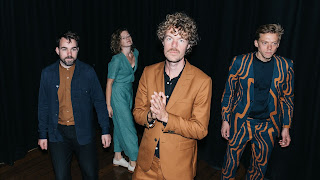 Carthage is inspired by the story of the fall of the city of the same name, and by the Roman general who stood weeping outside the city as his soldiers burned it to the ground. He knew that at some point in the future, Rome had to fall as well. The song draws a parallel between the rise and fall of civilizations and the rise and fall of human relationships.

The songs of Classic Water bring to mind driving through dusty back roads of deserted villages, thinking back on what once was but will never be again. The surreal words of singer Tom Gerritsen are guided by stretches of intertwining melodies, alternated with brief bursts of rock and roll.