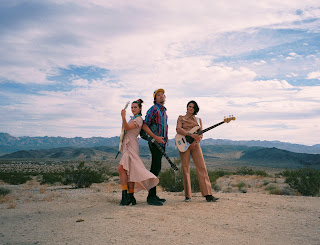 SLUGS - I Could Do Better.

SLUGS latest tune “I Could Do Better” got its title after enduring a flight from a poor choice of airline when the idea of I could do better humorously arose. Later working with a friend the song was written and developed at a time when exploring the journey of sobriety, where the lyrics took a deeper dive into the meaning. The song narrates wanting to find a way back to the blissful naivety of being a child, as well as the wonderful and complicated revelations and the highs and lows during the process of grounding. Longstreet shares, “I compared my carefree attitude as a child, finger painting an image of nothing, to the “I don’t care” attitude of my 20’s. I wrote this song as if it were an intervention on myself, and I was playing both sides. I wanted to find my way back to carefree innocence coming from a place of sinister repetition and complacency.”

“I Could Do Better” emits a reflective and experimental sonic appeal through its trippy, psychedelic feel. Somewhat woozy and chill, the song has subtle peaks and falls with wavering vocal melodies that metaphorically pronounce the verified range of emotions. Through jingling high-hats, rocking, rich electric riffs, twangy guitars and a range of percussion that has a softer, tropical sound, “I Could Do Better” is truly transcending. The vocals are soft and restrained, yet clear and powerful, adding to the juxtaposition of the feelings around the journey of going sober. Longstreet explains, “I think the theme is a voyage of floating in space, the big chaotic crash down and every small step after in getting grounded.”

SLUGS have been on tours with LP & The Districts and have opened for Jessica Lea Mayfield, Joywave, Lets Eat Grandma & The Mattson II. Having garnered acclaim from the likes of Refinery29, Live Nation’s Ones to Watch, American Songwriter and Earmilk, SLUGS are certainly an artist to watch in 2021.
SLUGS · I Could Do Better 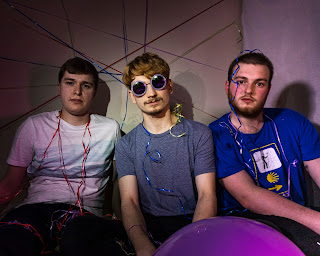 ‘Football’ is the raw, explosive second single from Glasgow based solo artist Gunke that discusses the anxieties of not fitting channelling that into a churning slice of head nodding energy and a chant along chorus that will resonate with so many that have felt socially outcast ("Football? Softball? I don't know the difference”).

Gunke is the solo creative efforts of Luc Grindle (Dutch Wine, HEYUP, Moonsoup), which aims to bring out the brighter, more optimistic side of punk rock.

Taking strong influence from the likes of The Cribs, Yuck and early Bombay Bicycle Club hits, this is one sure to be left humming their tunes for days to come.

“‘Football' took a long time to mature as a song; four years of recordings in fact!

“I didn't really engage in sports growing up, so often felt out of my depth when conversing with friends who would talk about last night's game or whatever; I made the chorus with football chants in mind as way to a kind of counteract that notion.

“I took a lot of inspiration from The Cribs during the writing process, a lot of their fans are football lads, despite the band having no interest in the sport, I found that quite fitting to pay some kind of homage to.” 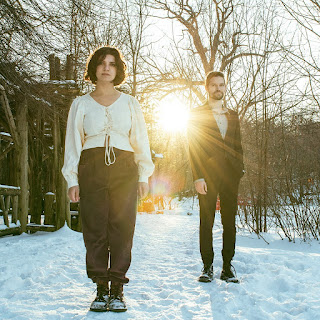 Gawain and the Green Knight - In My Dreams, a Perfect Chair.

With the release of “In My Dreams, a Perfect Chair,” Gawain and the Green Knight announce their upcoming EP, A Sleeping Place, out June 11, 2021. The new single exemplifies the duo’s “literary folk” stylings, filled with allegory and inspired by mythology, or, as they put it, “folk for people who like to listen to music while pacing mournfully yet poignantly through the streets, pretending they’re the protagonist in a very beautiful film.” Listen HERE.

“In My Dreams, a Perfect Chair” offers a deep dive on insecurities, centering around a woodworker’s apprentice who feels inadequate because they can’t make anything good enough. Vocalist/guitarist, Alexia Antoniou, wrote the song as a metaphor for her own writer’s block, and multi-instrumentalist bandmate, Mike O’Malley, and the EP’s drummer, Derek Swink, created woodshop inspired sounds to immerse the listener in the story, mimicking sandpaper and hammers. “It’s strange to think of artists in the past being full of doubt, anxiety, self-loathing. Because the art remains but the process is so rarely documented,” Antoniou observes. “But of course, those emotions had to be all tangled in the artistic process, no matter what time we’re talking about… right? I think anyone who has ever sat down to make a thing can relate.”

Partners in life as well as in music, Antoniou and O’Malley were due to be married in the fall of 2020. Like everyone, their plans were waylaid by the COVID-19 pandemic. Finding themselves isolated, surrounded by insecurity and fear, they felt an urgent need to capture these songs that felt of the moment. “Even before all of last year happened, the fact of our own mortality always felt present, impossible to get away from, really. I think there must be something biologically in human brains that tries to make you forget it so you can function, and the part of you that remembers your mortality and the part that makes you forget are always going at one another,” says Antoniou.

Inspired by the etymology of the Greek word for cemetery, which simply means “a sleeping place,” the duo created a collection of songs that sits comfortably in the deep, sometimes dark, parts of the subconscious, arranged in such a way that you remember why life can be so joyful in the first place, its tempo anything but sad. “I think of this EP as a love letter, full of desperate affection, to anyone who has ever been alive and been scared to die,” Antoniou continues. “Death is loud, but it doesn’t mean you were never heard.” 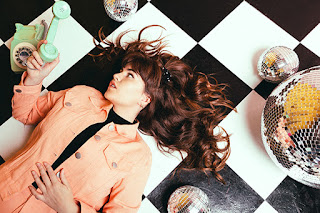 Ahead of the release of her new album, Do It Again, Shannon Dooks, lends her supple voice to its earnest and heartfelt lead single, “Doubts” — available now!

When a once-thriving connection turns dubious, acknowledging the signs can be a tough experience — and “Doubts” says it all. Everything from the innocent piano intro to the mellow rhythm sections that follow, the arrangements send the notion of a fond farewell wrapped in a melodic package.

The message within is signed, sealed and delivered by Shannon Dooks’s harmonious and smooth vocal style. As light as the single sounds, the weight within the lyrics denotes a tipping point in a crumbling relationship. According to the Toronto-based artist, “it’s that feeling of constantly putting in effort into the relationship and each broken promise is that much more devastating as it goes on and then you finally reach a breaking point.”

The introductory lyrics in the first verse of “Doubts” perfectly summarizes the singer’s insight: “Don't write, don't text, don’t call, don't do anything at all.” Further reinforcing the message are the closing lyrics of the first verse: “You tell me go, you tell me stay, you tell me leave, but don't tell me what I should believe.”

While Shannon Dooks is known for writing her own songs, “Doubts” was penned by Toronto-based internationally-renowned songwriter, Rosanne Baker Thornley. The single was intended to be a submission for film and television spots, however the voice of Shannon Dooks was found to be a perfect vessel for the tone of the single. 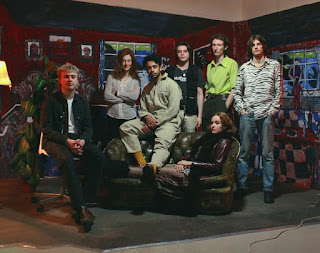 This Is The Deep - Glass.

East London 7-piece psych pop collective This Is The Deep have released their new single "Glass", along with the announcement of their debut EP 'The Best Is Yet To Come (Part 1)' - out May 21st via B3SCI Records.

Over the last two years This Is The Deep have quietly established a cult live following through support slots with HMLTD, PVA, and Family Time, as well as their own sold out cross-over events at venues such as Windmill Brixton, Moth Club and The Shacklewell Arms, combining immersive art and video installations with live performances from acts including Sinead O'Brien, Opus Kink and Baby Vanga.

Debut EP 'The Best Is Yet To Come (Part 1)' out May 21st is a stunning 7-track introduction, with new single "Glass" an inarguably captivating invitation into This Is The Deep's mysterious world. Utilising a sample of a dramatic reading of Humpty Dumpty, the track brings together a cacophony of horns, pounding drums and squelching synths - all written, recorded and produced by the band at 'The Sauna', their HQ in Hackney Wick.

Speaking on the themes at play on "Glass", the band said: "The song is about the idea of falling and the feeling of something foreboding happening as the result of over-reaching. There are different ways to interpret the lyrics; they can apply to the excesses of late capitalism, our unbalanced position with the natural world, as well as a relationship between two people.The focus on falling and impact could also be seen to be a metaphor for a human position of being in some way always falling towards something, some conclusion or unknown destination. Maybe ultimately the fall is part of what we are, as Buzz Lightyear says maybe we're not flying but ‘falling with style’."

The track's engrossing video was directed and animated by the band themselves, and follows a muscled action-man in a dystopian CGI city who gets sucked into another world through his TV.

"It's kind of a retelling of Humpty Dumpty but instead of an egg there's this bald muscly action-man figure and instead of falling and cracking he gets sucked into another world through his TV", the band nonchalantly explain, going on to say..."He falls into a plasticine Loony-Toons inspired landscape haunted by a mysterious cowboy with pop-corn eyes where pop-corn clouds hang in the sky. We're interested in working with the tropes of visual media and popular culture and how they affect the way we perceive and ultimately construct the world. David Greaber's quote that 'The ultimate hidden truth of the world is it is something we make and could just as easily make differently sums this up for us pretty well."

What started out as late night recording sessions between flatmates Ranald Macdonald, David Bardon and Oscar Robertson - quickly spiralled into This Is The Deep’s carnivalesque troupe of seven musicians. Drawing as much from artists such as Suicide, Death Grips, and the scores of David Lynch and Ennio Morricone, as from the glittery pop-disco of the Scissor Sisters, This Is The Deep consists of post-punk royalty Susie Honeyman (Mekons) on fiddle, Sammy Silue on guitar and vocals, Ranald Macdonald on synth and vocals, Hannah Tilson on trombone and vocals, David Bardon and Oscar Robertson on bass and drums, with electronic drums and percussion from Liam Toon.