FRESH have worked tirelessly since their inception – touring with the likes of The Beths, PUP, Adult Mom and more, releasing two albums and amassing a devoted fanbase following appearances at Fest, Manchester Punk Festival and The Fest in Madrid amongst others. For a band that have existed for a relatively short period of time, the four-piece have already released a hefty catalogue of work – prolific, ever evolving and always fresh (in every sense of the word). The UK punk scene continues to suffer at the hands of Covid-19 and following a year of no live shows, ‘The Summer I Got Good at Guitar’ is here to remind us not only of what we’re missing but of what we’ve got to look forward to when FRESH can finally tour again.

My Redemption Arc’ and EP closer ‘Cry For Help’ were written back to back following a tour in Europe, each referencing a time when lead singer and principle songwriter Kathryn Woods felt alienated abroad. Featuring Phoebe and Sophie from Kathryn’s other band cheerbleederz on vocals, new single “’My Redemption Arc’ is a reflection on how your problems are still your problems, no matter where you are in the world and how far away from home you may be” she says. “I also reference an old friendship that ended suddenly, and how funny it is that you can still have deep attachments to somebody that you haven’t had contact with in years (“sometimes I still read things in your voice”).”

Lead single ‘Girl Clout’, which was released last month, is a musical embodiment of frustration and pure visceral anger. “I wrote it in two minutes and as soon as we jammed it out together, we knew that it felt right” says Woods. “Themes include power, not being taken seriously by male musicians and bands, and being tokenised. It’s also about seeing through performative male allyship, owning your space in punk music as a woman and venting your frustrations through good old-fashioned rock and roll.‘

FRESH have been an unwavering fixture within the UK punk scene since their first record in 2017. A joy to behold live, the band includes musical peer Myles McCabe of ME REX, while lead singer Kathryn Woods is a member of a number of heralded indie and punk bands, including cheerbleederz and ME REX alongside McCabe. With future plans to tour alongside a new album, FRESH show no signs of slowing down anytime soon. 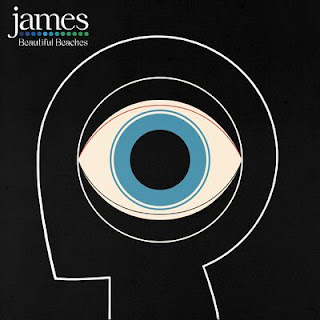 Today, UK alternative band James announce the release of a brand-new track, taken from their forthcoming album All The Colours Of You. “Beautiful Beaches” is available now across all DSPs, with the album following on June 4, 2021.

A resident of Topanga Canyon for many years, Tim Booth wrote the lyrics of “Beautiful Beaches” in response to climate change migrations and the subsequent increasingly regular Californian fires bringing devastation to his community. It was inspired by a friend who lost his 'fire proof' home and had to flee for his life to the beaches and a recurring vision Tim had last year of earthquakes and fires in California - a vision which resulted in his family packing up and leaving the Canyon. ‘That life we left behind, we’re racing down to those beautiful beaches’.

“We love how this song is so uplifting, focusing on new beginnings,” Tim says. “I like the idea that many might not know the backstory and hear it as a post Covid holiday song! Praying that the lyrics don’t turn out prophetic."

“Beautiful Beaches” follows the title track and first single “All The Colours Of You”, released last month. It too is a personal account, tackling the Trump based Covid year and civil rights struggle head on.

James’ sixteenth studio album, All The Colours Of You was recorded in part before the Covid pandemic struck and is produced by the Grammy award-winning Jacknife Lee (U2, REM, Snow Patrol, The Killers). Matching the energy of the lyrics, Lee brought a fresh approach to James’ sound, working remotely from his studio with Booth (Lee’s Topanga Canyon neighbor) and liaising in a daisy chain with fellow band member Jim Glennie, reimagining their demos, and capturing the band in all their virtual glory.

The result is a record with the most fresh and festival ready tracks of their 39-year career, the sound of one of Britain’s best bands, deconstructed and reassembled by one of the world’s most renowned producers. Led by guitarist/composer Steve Gerlach (Tommy Keene, John Cale, Plush) and featuring members of The Tossers and Sons Of The Silent Age, OUTRONAUT is largely an instrumental affair that leaves room for the imagination.

The third video from the Chicago quartet‘s latest album, Kill The Light, is an animated battle between good and evil set to an instrumental prog-surf epic.

Emerging animator P-Chan, aka Phil Fujiwara, brings the villain - COVID 19 personified - and the healthcare hero together on top of the Statue of Liberty for a life-or-death showdown against a backdrop of blown-out band footage shot at Liars Club in Chicago.