New York’s Simone is revealing the 3rd song “everything/nothing” from her upcoming pure pop love lessons EP which will come out this summer. At 16, after releasing her first alt-pop track "Kissing Strangers" earlier this year and she revealed “Boy Of My Dreams”. Simone writes with a cinematic eye here, capturing the rough edges of modern relationships in vivid detail.

Simone explains the song: “everything/nothing” tells a story about a young love from its beginning to its end. In the chorus, I play with the clichés of teen romance by contrasting them with the anxiety and pain that comes along with it. On the surface, the song is a classic love story, but there are a lot of underlying messages about the pressure and confusion that comes with being a teenager.”

At 10 years old, her worldview opened up to become a performer when she sang 2 self-written songs at an open mic in Nashville, TN. Needless to say that from an early age, New York-based Simone has set her vision on sharing her love for music. “Kissing Strangers”s arrangements are sonically rich to match, mixing radio-ready pop hooks with indie rock grit and singer/songwriter intimacy. “Kissing Strangers” is a buoyant, brilliant earworm exploring the rise and fall of young love in all its exhilarating, heartbreaking transience. About “Boy Of My Dreams”, she said: “it’s a song I wrote after ending a relationship that really damaged my perception of love.”

Born and raised in New York City, Simone first fell in love with Broadway as a youngster. By the age of ten, she’d already appeared in a slew of musicals, and by the time she hit middle school, she was writing her own songs and performing regularly at New York open mic nights, such as Sidewalk Cafe. It was at one of those early performances that Simone caught the attention of a New York-based producer, and soon she found herself recording in a proper studio and making waves across Spotify and social media. With a mix of mesmerizing performance clips and down-to-earth, straight-to-camera videos documenting daily life, she quickly went viral on TikTok (247k followers), racking up millions of likes from fans around the world who could relate to both her unabashed ambition and dry, self-deprecating sense of humor.

Simone’s musically diverse songwriting styles from acoustic teary to pop bops will be part of her upcoming full love lessons EP this summer. Besides writing, she hosts a weekly podcast Is This Thing On?. 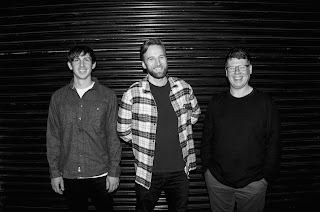 We Were Promised Jetpacks - If It Happens.

Heralded Scottish rock band We Were Promised Jetpacks share brand new single ‘If It Happens’, and announce a 7” featuring the track to be released via Big Scary Monsters on June 29th. The new track signifies a change in musical direction for the band. ‘If It Happens’ is all at once grand yet restrained – sonically reflective of its lyrical examination of the bigger picture of life and how that can be boiled down to a simple phrase; “If it happens, it happens.” Lead singer Adam Thompson explains:

“I feel that ‘If It Happens’ expresses a lot about what I had been trying to get across to myself. It was all part of my new mindset of trying to be more positive about what I have and not always thinking about what I don’t. It’s about embracing the idea of happiness, doing what you can to encourage it and generally be a lot more ‘c’est la vie’ about everything. If it happens, it happens; if it doesn’t, it doesn’t. What can you do?”

Since releasing 2018’s ‘The More I Sleep The Less I Dream’, We Were Promised Jetpacks’ Adam Thompson, Sean Smith and Darren Lackie have embraced change head-on. Amicably parting ways with founding member Michael Palmer the following year, they knew they would likely need to go through a sonic transition.

Entering 2020 as a trio with a handful of songs written and a successful US tour under their belts, the world around them came to a sudden halt. Yet despite the unquestionable uncertainty that the lockdown brought, it also proved to be a blessing in disguise. Fifteen years into their career, the trio are more focussed than ever.

With versions of this song being passed between the band members remotely, they found the collaborative process engaging and rewarding. “Writing together this way allowed us to stay in contact all the time, talk about the song and what we were individually and collectively trying to achieve with it. Even though we were unable to be in the same room, this way of working allowed us to create together and communicate more directly,” says Adam. “Having music to focus on during lockdown assured us that we wanted to keep writing songs together for many more years.”

“We’re all very appreciative of the people who are listening to us,” Darren says. “It pushes us to keep getting better.” Nodding to both the band and their ever-loyal fans, Adam agrees. “It is very much our band, and we do this because we can do it together.” 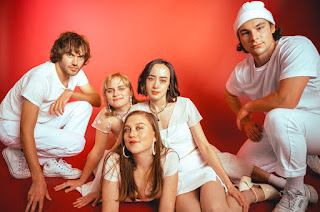 Recorded as a part of an all-nighter, one-take, not-campus-approved sessions on a squash court at the band's now alma mater, Vassar College, "Supersonic" captures the band's family dynamic

Ari Bowe (keys, vocals) details; "Since the girls write all the lyrics, we always end up writing about the guys in the band. It’s almost like a rite of passage, and for us it’s a fun way to get our feelings out there. There are a lot of songs about Jackson, but this song is Ben’s debut as our subject!

It’s about us all being worried that Ben (with his newfound party persona) would get himself in more trouble than he could handle. Hence 'Good luck doing time for a big smile.' The lyrics definitely embody a sort of cheeky warning to our beloved Ben.

While he was pissed at first, he came to understand where the lyrics were coming from, and the song is now one of his top tracks from Good Kids.” 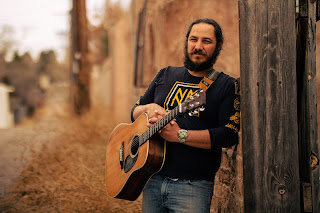 David Climaco Garcia - Down By Her Riverside Home.

David Climaco Garcia announces the release of the gentle Americana tune, “Down by Her Riverside Home” on May 6. Built on a traditional Irish ballad song structure, the single provides an interlude from grief through the comforts of nature.

The single was released exclusively on Bandcamp in honor of Earth Day. Before the official May 6 release, proceeds will be donated to the non-profit wilderness advocacy group, New Mexico Wilderness Alliance.  The single is off the album, Between the Devil and Me, due out this summer.

Written about the upper Gila River that flows through 45 miles of pristine wilderness, it tells the story of a widow who lived on the river with her daughter, who was lost in a tragic accident. Soothing vocals and instrumentals mimic the woman wandering the river’s banks, trying to find solace and commune with her lost child amongst the trees. 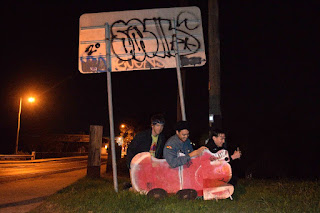 Hey hey! Spirits rejoice! It’s a new Dag album. And something is going on here - there’s a new Dag in town. It’s that thing when singer/songwriter Dusty Anastassiou walks on stage, talks into the mic and the room just kinda melts ‘cause everyone knows this guy has got us all covered - he’s with you and of us and he sounds at peace with the crumbling passage of your day.  Well, it’s that thing, but beautifully recorded for posterity and spread across two platters of vinyl (yes two!) to warm the cockles of your broken heart.

But it’s much more too. Lifetones in the key of three - a band that’s so snug you don’t even notice there are three of them. These pups are from the same litter. They’ve got the group-think glue, Dan Ford and Dave McMillan sewing it all up seamlessly with the Dust. But you still want more! That’s the beauty of recording songs - you can have a bit more, and it’s all here friend. Field recordings of a distant storm, Nicole Thibault’s trombone, violin from Lily Tait, casiotone tinkly bop courtesy of Stefan Blair, spot-on extra vox from Liv Jansz and Francisca Castro-Merino, plaintive keys over a decaying mumbled voice - that lovely double album stretch-out.

"Big Plans (Little Hands) is about the joys of falling in love, finding peace and comfort in connecting with someone completely — and the false promise of escaping your self through someone else. Who better to represent these complex emotions than our friends the teddies?" - Dusty Anastassiou, Dag

As you read this, Dusty is most likely somewhere near a small town called Munduberra, and there’s no mistaking this album is an Australian record - think The Cannanes circa Randell Lee (or indeed Ashtray Boy) via rural Queensland and you might have a starting point musically. Maybe there is some regional AM country radio in here? I wouldn’t know. I do know Dusty used to take long drives through the deep Australian night with his Mum while Harold Budd played on the car stereo. So there’s a bit of depth beneath the mystery of Dag. “The sad old planet has seen better days" sings Captain Dusty - but as Albert Ayler let us know, music is the healing force of the universe. So get a dose of Dag in your day!