Tunnel Vision - My Way Out.

Steadily earning a reputation as Southern California’s preeminent emerging surf/reggae/ska band, San Clemente-based Tunnel Vision grew up in a beach-town with instruments in their hands and surfboards under their feet, emulating the surfer legends of reggae rock who came before them.

So when they were invited to join Ballyhoo and The Expendables (as the two iconic bands hit the road performing each other’s songs on this year’s ExpendaHoo tour), the supporting act decided to get into the spirit of things with a tour-influenced cover of their own. Tunnel Vision gives a nod of respect to their musical lineage as they reimagine their favorite surf-inspired Expendables tune with their new single “My Way Out” (out now on LAW Records).

“We really love the concept behind the tour, with The Expendables doing Ballyhoo songs and vice versa, so we are feeding off of that synergy with this single,” says Tunnel Vision lead singer and guitarist Hayden Hanson. “‘My Way Out’ is a cover of one of our favorite Expendables songs. We grew up listening and relating to this song since we were kids ...and we started learning to play it as soon as we picked up our instruments. We're just so stoked to be part of the tour; to get a chance to play with these bands every night and to release our own version of this song that means so much to us is surreal.”

“My Way Out” is a song that conjures romantic imagery of what it’s like growing up in an idyllic little beach town, where surfing is both the daily agenda and the day’s escape. But it is an imagery that carries the familiarity of home for the members of Tunnel Vision. 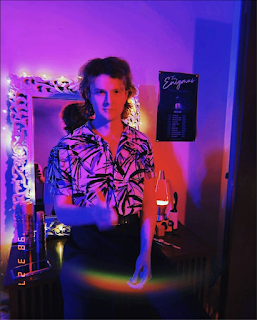 Engaging repressed emotions with lyrics like, “My dream was to be a stuntman,” from his first single, “Night Drive,” Carson tells how the joy of life is removed after one’s dreams have been abandoned and the curative remedy is to free yourself by taking a “Night Drive.”

"The best thing I did was walk out on you
I was so damn stressed out I knew
I would be so left out lampooned
There would be no pleasure for you
I would way more rather do the things I like
Then we could stop all the lies and we'd be alright
We could wave goodbye to this cartoon life
And by the look in your eyes this'll be the night."