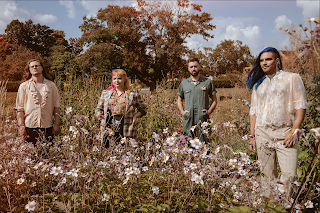 Basement Revolver has always centered around the friendship of bassist/keyboardist Nim Agalawatte and guitarist/vocalist Chrisy Hurn. Lead guitarist Jonathan Malström and drummer Levi Kertesz round out the band’s larger-than-life sound.

The band’s catalogue spans back to their breakout single, 2016’s “Johnny.” That single, and their self-titled EP from the same year, led to their signing with Fear of Missing Out in the UK, and later, Canada’s Sonic Unyon Records.

Heavy Eyes, their debut LP, built on their aesthetic which merges hardcore-inspired indie and ambient dream pop. In support of that they toured throughout the US, Canada, the UK, and Germany. With tour plans on hold through 2020, Basement Revolver found time to wrestle with questions about identity, faith, mental illness, and sexuality.

Their sophomore LP, Embody, is explicit about these new ideas and new thoughts, addressing them with a deeper sound and crisper production to adroitly express the complexity of the world. It is an album of friendship, of working out identity together, and making deeply personal art.

Bringing to mind the broodingly intense works of Dead Can Dance or Liars, crossed with the philosophical songwriting of De André and Tom Zé, it’s a twitchingly paranoid and quietly exhilarating hint of what to expect on new album ‘NaN’.

Directed by Ian Carvalho, the single is accompanied by a misleadingly lo-fi video, which reveals hidden depths with repeated views. Shot by the band in a single-take using the Datamosh technique, it follows the band as they traverse through the scenic town of Monopoli in Puglia, Italy. The Mediaeval setting of warm-colored palaces on a summer evening soon begin to glitch chaotically with pixelated footage; and hint that all may not be as it seems… Speaking about the video Tina adds:

“The idea of contrasting the beauty of that historic city centre with the digital “dirt”, created by Data Mosh, fascinated us because it represents the message that the music expresses very well: The conflict. This is solved by the protagonist "abandoning the field" and crossing a counter-current path that leads from Aesthetic Beauty, represented in the video by the Madia Cathedral square, to Ethical Beauty, represented by the church of Purgatory, important for its representations of the various "Memento Mori.”

Produced and Mixed by In A Sleeping Mood with Hate Moss, the “Eremita” also features guest appearances from Donato Panaccio (Bass and Arp Guitars) and Mauro Polito (percussion). It was mastered at Loud Mastering studios by Jason Mitchell.

Hate Moss is an Italo-Brazilian duo formed by Tina and Ian in 2018. Formed in London and currently living a nomadic existence, the duo have performed on numerous stages across South America, Europe and the Middle East, while drawing crowds at international festivals like the Venice Biennale (IT), Locomotiva Festival (BR) and Goiania Noise (BR), earning a cult following in the process.

The Iowa-born, Nashville-based rising Country star Hailey Whitters has released her new single “The Neon” from her highly anticipated third album RAISED that will be released on March 18 via Pigasus Records/Songs & Daughters/Big Loud Records. The single arrives with a Harper Smith-directed lyric video shot at Dee’s Country Cocktail Lounge in Nashville, TN. RAISED is now available for preorder.

“I wrote ‘The Neon’ with Lori McKenna and Rodney Clawson about a broken-hearted bender on the town,” Whitters explains. “It was our first time writing together and Lori brought in the title. I think the next line that came out of the room that day was ‘here comes the sad part’ and we instantly knew it was this ‘tear in my beer’ type lyric. I love getting to tap into this song emotionally every time I sing it. Whenever I'm feelin' blue, there's no broken heart a barstool and a cold beer (or shot of tequila) can't fix.”

Last month, Whitters released the album’s debut single “Everything She Ain’t,” which was praised by American Songwriter, BrooklynVegan, Rolling Stone and Billboard who said, "Whitters has proven herself a stellar songwriter and artist in equal measure… handclaps and sweet fiddle lines boost Whitters’ charming vocal and razor-sharp wordplay.”

The 17-song album was co-produced by Whitters alongside producer Jake Gear, who produced Whitters’ 2020 release THE DREAM and the subsequent deluxe album LIVING THE DREAM, and was engineered by Logan Matheny. The album also finds Whitters reconnecting with co-writers Brandy Clark, Nicolle Galyon, Hillary Lindsey, and Lori McKenna.

RAISED finds Whitters reconnecting with her Midwestern roots and hometown of Shueyville, IA, reflecting on family, first kisses, and life amid sprawling cornfields. “This record is where I'm from, this is me. It feels like the prequel to THE DREAM,” explains Whitters. “These are the people and this is the place that made that 17 year old girl leave everything she'd ever known to pursue a career in country music and not give up over the last 14 years.” 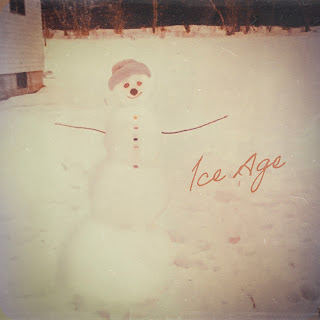 Carleton Stone, an award-winning artist, a songwriter with a growing list of credits, and a founding member of Port Cities, has recently added producer to his list of accomplishments.

Carleton has three solo records to his credit, multiple awards, and has toured internationally. An outstanding writer, Carleton has written songs for and with such diverse artists as Donovan Woods, Classified, Bobby Bazini, and Neon Dreams.

Carleton’s producer debut was Willie Stratton’s “The Way She Holds Me,” and his fall will be jam packed with producing Willie’s new record, songs by Chudi Harris, and his own new solo release in June 2022.