"I Give You The Morning," is a gorgeous selection from Pittsburgh Americana sextet Buffalo Rose, who partnered with GRAMMY-winning folk legend Tom Paxton for a gorgeous EP called Rabbit released today via Misra Records.

If you think you know what acoustic music is all about - just wait. Buffalo Rose takes the folk styles of the past and gleefully blends them with modern, contemporary flair. If a smile was a band, it would be Buffalo Rose.

Rabbit is a perfect release for the last gasp of winter; as we pin our hopes on spring, eagerly awaiting the days of more and more sunshine, this new EP will warm up any who listen. Combining Paxton’s honed writing skills with the instrumental prowess of Buffalo Rose, the album’s themes are derived from the hope of doing all we can do to find what we’re looking for. In this EP, these seven musicians explore answers to many questions, and they have a blast doing it. 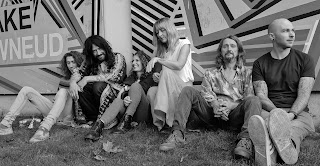 'Spinning Wheels' is the latest offering by Swansea based 6-piece Alternative Folk band 'Lost Tuesday Society'. Taken from their successful latest album 'Bee Skin Rug' the band explore a darker sound and show a diverse dynamic following the bright and airy 'Lights' which was playlisted on the BBC Radio Wales 'Welsh A-List'.

The result is a unique blend of music with intricate compositions, strong hooks and melody lines combining in a huge dynamic sound that has people up on their feet.

With four vocalists (Sarah, Kate, Darran and Alfie) in the band the harmonies are interesting, beautiful and an important element to the Lost Tuesday Society sound. With a heavier back line and driving rhythm section ( Jay and Simon) and two accomplished guitarists (in Alfie and Darran) the new material presented today has a maturity and edge which is beautifully enhanced by weaving strings (Kate),flute(Alfie) and melodica (Sarah).

We have the new single + video from Alyssa Midcalf's Primer project - directed in the Mojave desert by Jax Anderson. It's called "Warning." Here's what Alyssa has to say about it:

Warning is a celebration of the end of a toxic relationship. It’s a grand finale to the record and to a years long cycle of pain and anguish. I wrote the song during a hard turn in my life. I spent so much of my life with someone who siphoned my energy and depleted my whole world of color and light. I had to come to terms with knowing I will never be able to change the past or get that time back but I could meditate on the fact that I am no longer in that place.

And about the video location: I chose to shoot the video in the Mojave desert because it’s where I grew up. I spent all my teen years trying to reject the desert; feeling stifled and isolated there and wanting so badly to move as far away as possible. And now that I have moved away to many different places, I’ve been able to accept that it will always be my home regardless of where I go.

“There were experiences that hit me hard emotionally, moments in my life that hit me in a weird way,” Alyssa Midcalf shares when asked about the inspiration behind her latest album, Incubator. “I felt like the only way to process them was to write about them.” In 2019, under the performance moniker Primer, Midcalf released her first solo album Novelty. The vocalist and electronic producer has put the full wealth of her experience into her sophomore album, Incubator, sharing honest, and sometimes harrowing, stories from her own life through a pop-tinted lens.