“How do you write a song about online dating and its familiar combination of hope and disappointment” say BRYDE of ‘Algorithms (cyber)’, “It’s like a real-life social media notification you can't stop checking. How do you write about ice cream, gaslighting, fleeting feelings that can creep out the back door when you're not looking, THE INTERNET!!  About the fact we can now research each other before ever meeting IRL?”

As with all the ten songs on Bryde's album Still, ‘Algorithms (cyber)’ is not a simple tale of love, or the search for. Instead, it unpacks deep-rooted societal views on it, the preconceptions, and trappings, explored with prose that is both vulnerable it its honesty and worldly wise, wrapped in a lush soundscape led by Bryde’s dreamy guitar, pulsating drums, and the achingly beautiful vocals.

“An algorithm is a list of rules to follow to solve a problem”, Bryde expands, “The problem of being single? Except being single isn’t a problem until we make it one. In short ‘Algorithms (cyber)’ is an ode to leaving behind the games of the digital word.”

The accompanying video created by Rhys Davies stars Drag Race UK star Scarlett Harlett (aka Harry Luke Mulvey). It captures an intimate moment in time in a couple’s life following an off-screen violent altercation with one of the lovers, a drag artist (played by Mulvey), as he returns home. It’s a beautifully vulnerable and tender portrayal of love in a sometimes-uncontrollable and unfair world.

Bay Area-based Monophonics just released their video for “Sage Motel,” the title track from their new full-length out now via Colemine Records. The world's premier psychedelic soul band, Monophonics cordially invites you to attend the grand re-opening of the once thriving, once vibrant establishment, the legendary Sage Motel. A place where folks experience the highs and lows of human existence. A place where big dreams and broken hearts live, where people arrive without ever knowing how they got there. It's where individuals find themselves at a crossroads in life.

“We decided to make a film that captures the song’s spirit - encompassing all the desperation, lust, and messiness that can often be met when falling for someone; especially at the wrong time,” says Kassy Mahea, director of the “Sage Motel” music video. “The Sage Motel that I envisioned is set in rural nowhere America, and is frequented by characters that are flawed but, at the same time, interesting and beautiful. This video is an ode to the gritty, the passionate, the lost, the hopeful, and is another glimpse into the world within The Sage Motel.“

What started as a quaint motor lodge and a common pitstop for travelers and truckers in the 1940s, Sage Motel morphed into a bohemian’s hang by the 1960s and 1970s. Artists, musicians, and vagabonds of all types would stop there as seedy ownership pumped obnoxious amounts of money into high end renovations, eventually attracting some of the most prominent acts of the era. But when the money ran out, The Sage Motel devolved into a place where you rent by the hour. Sage Motel, Monophonics' fifth studio album since 2012, tells its story.

“‘Sage Motel’ was the second song we wrote for the album and ultimately was the spark that started this whole concept and story,” says Monophonics bandleader Kelly Finnigan. “It’s a song about a complicated relationship created out of incomparable physical chemistry, lust, passion & love. It’s the struggle of chasing something that will never be a reality, no matter how bad you want it. Some things are meant to happen, but not meant to be… and it all goes down at the Sage Motel.” 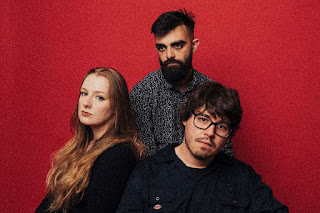 Following in the footsteps of his Beat Generation heroes, Blue Amber’s frontman Drew set out on a journey that would take him from the bright lights of New York City, through the heartlands of America, finishing up with an excursion down the West Coast highways. The trip, sound tracked by the jazz greats, instrumental hip hop pioneers and lo-fi cult bands such as The Microphones, inspired Drew to create his own new 'Beat Generation'. On his return home, armed with dozens of filled notebooks and completed rolls of film, Blue Amber was born.

Focus track, “Fencing” is an experimental indie rock track that fills you with a beautiful melancholy yearning for more.  Speaking on the track, “Fencing” incorporates an element of hope to the final track on the album, but also a sense of foreboding; that mistakes from the past are bound to repeat themselves. The song is exactly three minutes in length, the same length as each period in a bout in fencing, an idea that my partner at the time provided.

The first half of the record was inspired by the seaside town of Aberystwyth, the people who reside there and the artist’s personal soundtrack living there. The song ‘Hinterland Girls’ is about the people who you encounter on a typical night out in the town, while ‘West Coast Renaissance’ is a tribute to the enclosed art scene within the university arts scene. Continuing the theme, the second half of the record focuses on the experiences of returning to your hometown. It explores the feelings of returning to a place from your past, seeing people you haven’t seen in years and your relationship with a place you once knew so well. As a result, the tone of the second half of the record is darker, and more critical of its surroundings.

Initially a solo project based out of Drew's bedroom, Blue Amber quickly grew into a rotating ensemble of like-minded friends and musicians from all around the UK based in Cardiff. The band, now comprised of composer Freyja Elsy (keyboards/samples/vocals), jazz guitarist Kumar Chopra, and Drew Noel (vocals and saxophone), pull together a wide range of influences from instrumental hip hop to post-punk, beat poetry to indie folk, to create sonically diverse musical offerings that capture the experiences of 20-somethings in a post-Brexit Britain.