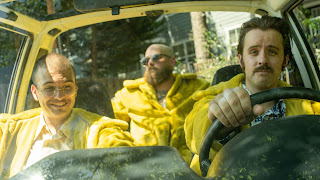 With so much of the music industry feeling constantly inundated with projects being disguised as indie music by major labels, there seems to be a level of exhaustion around the discovery of new bands. The Atlanta, GA-based Improvement Movement sets out to vertically and horizontally integrate all your needs with their debut project, Don’t Delay, Join Today! – out July 29, 2022, through Acrophase Records – which is a collection of songs that might gravitate towards fans of Drugdealer, Altin Gun, and Unknown Mortal Orchestra, as well as fans of startups like Theranos, WeWork, and Juicero.

In all seriousness, the project is a special amalgamation of insanely talented Atlanta musicians who have found a way to collaborate with each other under the band title. Improvement Movement includes (but is not limited to) a rotating cast of Atlanta musicians like Tony Aparo, Zach Pyles (credited on projects from Washed Out, Neon Indian, and Deerhunter to name a few), Marshall Ruffin (Lonnie Holley, The Mount, RUFFIN), Clark Hamilton (klark.sound, Safari Williams) – each a full-fledged artist in their own right – to execute their recordings and live shows. The band was aided in finishing the album by artists and producers including Kelly Pratt of Beirut playing all the woodwinds on the album and Jason Kingsland who mixed the album (notable credits include Band of Horses, Father John Misty, Belle and Sebastian).

Usually when a band starts an album cycle a press release is written in an effort to build a story around the band with mentions of all star producers and recording trips that yielded songs from the most famous studios on earth. For Improvement Movement we are here to dispel any of the unfounded rumors being spread that lay heavy claims of the project being mislabeled as a “cult” or “multi-level marketing scheme”. By the end of this EPK you will find yourself a believer in the greatest movement the world has ever seen.

Forever Honey - I've Been Down.

Yesterday Brooklyn rock outfit Forever Honey will be sharing their new single "I’ve Been Down.”  It’s the second of two singles off an upcoming EP titled “Could I Come Here Alone.” Lyrically, “I’ve Been Down” draws upon the personal experiences of singer Liv Price, who explains the song’s inspiration:

"I’ve Been Down" is about an instance of trying hard to force feelings for someone and what that point of staleness and auto-pilot looks and feels like–mentally checking out all the time; staring at the ceiling; going through the motions.

I had this realization one night of how many times I let relationships continue beyond their expiration dates.  In general, I’ve always had a tendency of doubting myself and second guessing what my gut is screaming at me, feeling like I’m just mistaken and need to try harder.  So, it took me much longer than I’d like to admit to recognize that I don’t actually owe anyone my love or company. And that my feelings for someone aren’t something I can just turn on and off, or will into existence.

The rest of the band breathes an air of melancholy into the poignant subject matter with catchy finesse. Instrumentally nodding to their shoegaze inspirations (e.g., Mazzy Star, The Sundays), chiming guitars weave in and out, complementing the emotive and directive vocals. Like so many Forever Honey songs, guitarist Mekonnen masterfully translates the sorrowful lyrics into equally expressive guitar riffs.

Forever Honey · I've Been Down 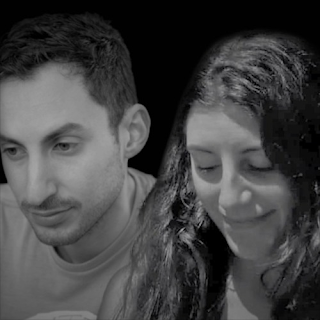 ‘Like Me’ is a soft and mysterious ode to dreams. It contemplates both the sweetness enveloping a dream and its in-satiety; it speaks both of the euphoria and the anxiety that come with chasing after it. Most of all, it speaks of vulnerability – the laying bare of the skin (and of the heart) – that comes with revealing it to others.

Lush strings pull us up to the heights of adrenaline, while tense drums and enigmatic melodies seem to bring the warning of tragedy. Together, they embody the stomach-turning sensation of anticipation and the indistinguishable feelings of fear and excitement. Yet, gentle synths and xylophones wrap us on a cloud – the drunken haze of dreams is lulling and luring.

The angelic vocals travel from soft whisper to powerful belt – there is vulnerability in sharing one’s heart, but there's also courage – and so the voice trembles but rejoices at the thought of possibility, gaining strength, and guiding us to a culmination that is supported by the band's atmospheric and powerful wall of sound.

The band is sharing the first theme from their debut album; they’re giving in to their most vulnerable moment. The question that now beckons to be asked is: Will you like it?

Melting Dreams are a dark dream-pop band formed by Inês Rebelo (Vocals and Vocal Production) and Asaf Rahamim (Songwriting and Production) who teamed up with Artur Lenivenko (piano and synths) and invited musicians from all over the globe to record their debut album, Can You See Me?, set for release in September 2022. They are greatly inspired by film-noir, animation films, and acts such as Kate Bush, Florence and the Machine, Lana Del Rey, and Patrick Watson. 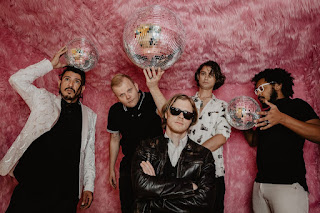 Phoenix-based 5-piece, Paper Foxes are back with their new single ‘Heartstrings’, taken from their upcoming new album Paradise Deluxe. With a genre-bending sound that blends elements of indie, disco and electronic music, the new single see’s the band venture further into the realm of synth-pop with an 80s-inspired, heavily electronic soundscape.

Full of bright yet warming analogue synth, punching electronic drums and thick, throbbing bass ‘Heartstrings’ quickly captures an uplifting feel as the intense, fluorescent electronic instrumentation takes hold. The effortlessly emotive, infectiously catchy lead vocal soon enters, instantly introducing the song's main hook with a cool, chilled delivery which emphasizes the track's edge. Reminiscent of the likes of M83 and MGMT, this is a fresh approach from the band, a move away from the guitar-led sound of their previous releases.

Made up of CJ Jacobson (vocals, guitar), Patro Gaston (synths), Oliver Lemke (guitar), Robert Ciuca (bass) and Henri Bernard (drums), Paper Foxes have garnered over 100 thousand streams to date, making a name for themselves with their unique brand of alternative-indie come new-wave. Having gained recognition after being named ‘the best-unsigned band in AZ’ by Alt Press in 2020, the band gained a number of sync deals with Netflix, MTV and A&E before setting out on a tour of the southwest United States with Hunny and The Happy Fits.

Now back with more material from their upcoming new album due for release in 2023, the band continue to establish themselves as an exciting up-and-coming band surely set for big things.