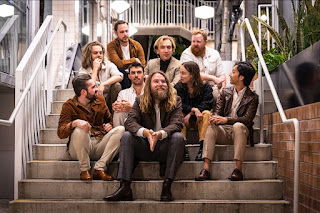 The Steele Syndicate - City of Dread.

A tranquil, subtropical rainforest studio made the perfect setting for Meanjin/Brisbane-based funk/rock octet The Steele Syndicate to record their debut album ‘Weekend’s Coming’. The result is an uplifting, delightfully noise-filled listen brimming with feel-good fun, and is out to enjoy now.

Encompassing the themes of work, love and happiness, 'Weekend's Coming' showcases the band at their raucous and rocking best, with signature doses of funk led by plenty of horns. Each song was recorded using only analogue instruments - so every horn stab, synth note, guitar, organ or kick sound is the real deal. Frontman Steele McMahon divulges:

“I remember tracking the lead guitar line for ‘One Beer (Is Never Enough)’, and having this old Roland Jazz Chorus maxed to the proverbial 11, and there being so much thick noise even when the guitar was not playing, that it sounded like the studio was literally drawing breath.

While it was challenging to utilize only real instruments, in a day where nearly every sound can be achieved with the touch of a button, I think it presented a fun and creative opportunity to embrace limitations, and really allow the nuances and idiosyncrasies of analogue instrumentation to shine.”

The band's feature album opens with the thought-provoking, sway-inducing 'City of Dread'. It sets the scene for next track 'Dance' to steal the spotlight, and amp things up with plenty of brassy fanfare.

"Oh what haunted tune can I bring you?" Uhl asks at the opening of "Haunted Tune," the first single from Channels. Her serpentine melodies and operatic storytelling cascade from there in perfectly executed art pop waves that crash over and over, recalling Kate Bush's The Sensual World or Annie Lennox's Diva or Weyes Blood's more recent work. To be sure, this is really not the kind of thing that works if it's only halfheartedly executed or if the artist is anything but exceptional.

And so here's Uhl: fully going for it and fullly pulling it off, supported by the acrobatic production of Peter Murray (Alela Diane, Lisa Crawley). The melodies are memorable, the arrangements are spot on, and the dramatic effect is consuming. Fans of Liz Fraser's and Cindy Sharp's songs on It'll End in Tears, brace yourselves.

Uhl embodies a different character in each song, "channeling" these narratives. In "Haunted Tune," the narrator seems to be singing from the other side, warning that "you can't fool love and you can't cheat fate," but then coolly posing: "Isn’t it a pity / A quick hand deals and suddenly you’re carried away / With all your mistakes / Can’t lose what wasn’t yours to take."

After recently being nominated for 'Best Alternative Artist' at the 2022 Aotearoa Music Awards, Vera Ellen has released her first new music in over a year! It comes in the audio visual form of instant classic 'Homewrecker'.

"Homewrecker is the personification of my inner demon forcing its way in to create chaos where it senses harmony. I'm my own home wrecker. Ain't we all?" - Vera Ellen

The video, directed by Albert River, and made with the support of NZ on Air, is a cheeky tip-of-the-hat to "The King of Cool" Dean Martin, and his 1983 'Since I Met You Baby' video. The high contrast visuals see Vera cheerfully crooning amongst a cast of gorgeous models, despite the bleak and introspective undertones of the song's lyrics.

"I didn't realise it was my dream to dress as Dean Martin and prance about on a roof until a few months ago. Never give up on even your most current dreams!" 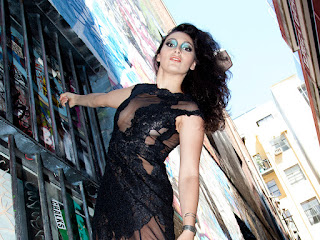 Get swept away by Jade Empress when her powerful electro-pop single 'Madness' came out yesterday October 14. Jade Empress has been gaining steam and collecting accolades over the last few years as a talented songwriter. She was the winner of multiple categories of Songsalive!'s Song Comp in 2017, a finalist in the Australian Songwriters Association Songwriting Contest for three consecutive years, a semi-finalist in the International Songwriting Competition 2021, a participant in Ben Folds’ 2021 songwriting intensive retreat - all while working as a frontline doctor in rural and remote Australia.

Now, the artist is swapping the stethoscope for a microphone, and is ready to share her second single with the world, named 'Madness'. A soaring piece that celebrates the artist's impressive vocal ability, 'Madness' speaks to embracing the chaos of daily life. Produced by Grammy award-winning Kon Kersting (who's worked with the likes of The Jungle Giants, Tones & I, The Reubens and many more), this is a moving, melancholic pop track with emotive piano, converging in a dramatically swirling melody that uplifts and carries the songwriter's compelling voice to even greater heights.

Written in response to the chaos of her life in recent years, she chose to welcome it rather than fight against it. "Routine has always been important for me. I thought the pandemic was bad. Now, suddenly I'm finding myself working in the Pacific, as a doctor alongside the Australian Defence Force, and living day to day in an environment of civil and political unrest, I truly appreciate uncertainty and a certain kind of daily madness."