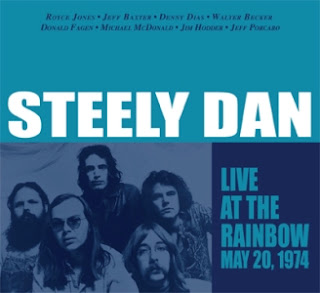 Steely Dan - precise, cool, bluesy, jazzy, mature, thoughtful, clever, serious, catchy, timeless, flawless, and hopefully you get my drift. Steely Dan were one of the bands that taught a younger me, that there was much more to music than three chord rock anthems, or in them day's who looked the part. When I bought Pretzel Logic, it became my favorite album of the time. I obtained a copy of a 1994 concert a while back, and was impressed with how good they sounded. I went to see them in London in 1974, I even remember the hassle our driver had finding somewhere to park, and the subsequent frantic search for a bar, before the gig. Arriving at the venue, the foyer was a sea of faded denim, and hair, so many long haired blokes, it seemed the hippies were back, from memory it seemed a rather male audience. So when I obtained a boot of the show recently I have to say I was over the moon. I was almost nervous when I began to play it, hoping it was at least listenable, and looking for s
1 comment
Read more
More posts