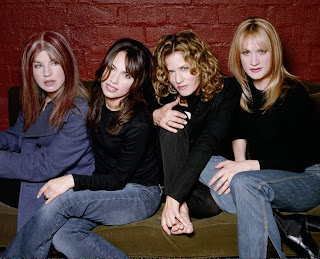 This is The Bangles live a couple of years before they hit the big time, with 'Manic Monday'.

Having morphed from The Bangs (for legal reasons), the band was part of the so called 'Paisley Underground' scene in LA, which featured groups that played a mixture of 1960s influenced folk-rock and jangle pop with a more modern punk/garage band undertone.

This is the band performing in Valencia, which a quick google suggests, is a pretty up market and wealthy location, sorry I do not know the specific venue.

In actual fact the band played two shows on this date, and I am pleased to have both of them to share, hence some songs appear twice, however they are very much to individual performances.

Set lists are as follows:

This is a good soundboard recording of both performances.

Some Bangles goodies in the Beehive Candy Store including 'The Best Of' at a crazy low price.
The Bangles

Anonymous said…
At the beginning of track 6 one of the Peterson sisters asks if anyone has "gone on the Freefall." The Freefall is a ride at Six Flags Magic Mountain in Valencia California. It's a safe bet the concert is at the park.
see:
http://www.ultimaterollercoaster.com/
thrillrides/freefall/

Thanks for the upload!

Anonymous said…
This is the Magic Mountain show. I should know...I SAW IT!!! I caught the early show here and they were fantastic! I think their first album had just been out and they were still fresh and rocking hard at this time, before the big hits change them. Finally...a live show I actually saw! lol

Anonymous said…
A number of tracks in this post have a pretty low bitrate, so low that it's hard to tell if this is even from the SBD...

Anonymous said…
ONLY PLACE TO PREFORM IN Valencia CA..would be the amusement park ..MAGIC MOUNTAIN
19 May 2008 at 15:00

MaxPericles said…
This is a historic show. Great sounding too...Thanks for posting!
28 September 2009 at 11:07

leesa said…
Thanx so much for the post... and certainly no offense meant... but for anyone who may be concerned - the Bit Rate here is 112.

If this is a Soundboard, it's one of the worst Soundboards I've ever heard. Sounds like an Audience to me.

Anonymous said…
Any chance of this one getting posted again? That would be awesome!

Zinger said…
Just discovered your site and it is awesome! Any chance of this Bangles being reposted? Thanks, Jeff
30 August 2012 at 02:51