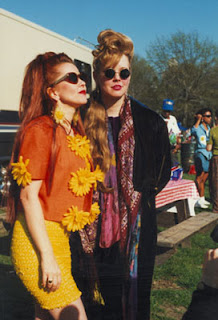 Welcome to this months 'Whats Up Doc'.

They have been called 'pop surrealists' and 'new wave kooks', their original 'trade mark hairstyles' clearly have had an influence on this blog, whatever, they are The B52's, and in these dark times, any band that can pick up sixteen years after they left off, with some fun music gets my vote!

The new album 'Funplex' is due out later this month, and here are two songs and two versions of the title track including a CSS remix, (CSS are just one of numerous bands to happily admit the positive impact The B52's have had on their music).

Another favorite band of The Beehive are The Black Crowes, who finally have their new album 'Warpaint' out, as of yesterday.

Recently insulted by Maxim magazine who reviewed and graded the album without even hearing it! The Black Crowes have released a fine album, that as you would expect, has their genuine rock'n'roll, low slung guitar sound, with Chris Robinson's vocals as consistent as ever.

It is just rock music, that's what they do, this will be played by many grateful fans of the band, that does not know how to sell out!

Listen to the opening track:
Black Crowes - Goodbye Daughters Of The Revolution(1).mp3

Well I think they are superb, they are one of those bands I discovered by chance, along with a dozen of other music bloggers by the looks, in my case I had an indie music stream running in the background and their song shone out immensely (did I just type that?).

The album 'Devotion' is out now, please give them a listen if you have not done so as yet, hopefully you will see where I am coming from.

Supergrass have literally grown up playing music, and at an average age of thirty years per band member, they are at some levels 'elder statesmen' of British post 'Britpop' music.

I have enjoyed every album they have released, and sense that in the cynical music press here in the UK, they have a rather unique position of pleasing both critic and your average punter, because they remain so very relevant.

The new album 'Diamond Hoo Ha' is to put it in Supergrass terms a stonker, with the usual energy levels and craftsmanship that makes this very British band so internationally fine.

Check the new album out and the best of HERE.

I am conscious that this month is very UK and USA orientated, so lets finish with Sweden's The Cardigans, who have a 'Best Of' recently released.

Just one well known track to share, go buy the album, you may be surprised on the goodies you have missed out on, unless your a fan in which case you already know!

Check out the best of album including a comprehensive bonus disc, fans are saying this is one of the best 'best of' albums ever released, not convinced then click and read the reviews HERE.

I hope this review has been of use, and as always I leave you with a song that has no relevance to the above at all.

The Korgis - Everybody's Got To Learn Sometime.MP3