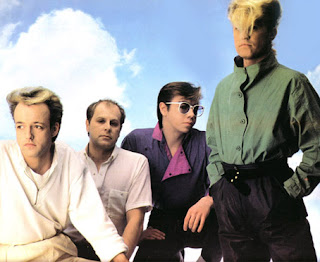 The group released its debut EP early in 1981, and while the record failed to chart, its lead track, 'Telecommunication' became an underground hit in Euro-disco and new wave clubs.

The band signed a major-label contract with Jive by the end of the year, and their eponymous debut album appeared in the spring of 1982.

'I Ran (So Far Away)' was released as the first single from the album, and MTV quickly picked up on its video, which featured long shots of Mike Score and his distinctive, cascading hair.

The single climbed into the American Top Ten, taking the album along with it. In the U.K., 'I Ran' didn't make the Top 40 (highest position 43), but 'Wishing (If I Had a Photograph of You)' reached number ten later that year.

Which in commercial terms was the high end of the bands success.

Mike Score continues to tour under the band's name with a new line-up, but the other original members have retired from music.

However the lasting quality of some of their material, and those haircuts, those wonderful 1980's haircuts, have preserved the band in rock history.

This is from the period that etched the band into the memories of many.

Recorded in Brighton, England on the 5-1-1983, the music is fresh and the band in the ascendancy.

New file link in comments below - Re-uploaded 2012 (Stealth project).
A Flock Of Seagulls

Anonymous said…
Excellent bootleg, but the three last songs are damaged
24 November 2008 at 03:29

Anonymous said…
This comment has been removed by a blog administrator.
14 October 2010 at 12:22