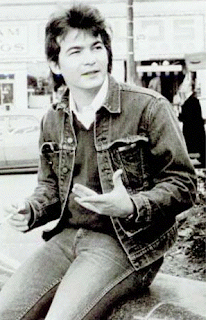 This is John Prine performing live for BBC Radio One, back in 1973 at the BBC Radio Theatre in London.

Source: One of BBC Radio 1's, 'In Concert' series from this era, originally recorded 'off air'.

Comments: Back in 1972, Atlantic records released the album 'sampler' The New Age Of Atlantic', a phenomenal album that introduced many 'rock' fans to John Prine and others (check HERE for more album details).

John Prine's inclusion was the song 'Sam Stone' which put concisely by 'Wikipedia' can be interpreted as, a reference to the phenomenon of morphine addiction among war veterans (at that time the Vietnam war) as a result of its use to treat crippling and painful injuries, and its often lifetime repercussions.

Personally I think the song is as relevant today, and on many levels, as when it was originally written and performed by John Prine. Despite my young age at the time (honest), it made a lasting impression on me, but above all it's such a wonderful piece of observational music.

If you would rather just listen to Sam Stone, hit play below, the concert download link is in comments for this posting.

Beehive Candy said…
Copy and paste to your web browser:

Anonymous said…
I recorded this of the TV at the time at held it dear to my heart - long agao I lost the tape and have tried for years to get a copy - it isn't available at the main John Prine sites - many many thanks for posting this - I'm 17 again !!!
28 January 2009 at 23:43