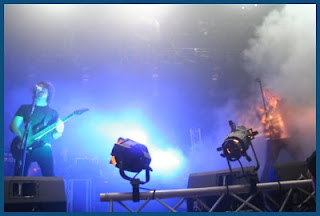 This is the second of five mainland European dates The Sisters Of Mercy performed, during their 'Trans Europe Excess Tour'.

The band who started performing live in 1981, had already developed a strong following with several independent single and EP releases, often being 'hailed' in the UK indie press of that time.

Playing at the excellent venue The Paradiso, Amsterdam, on the 28th August 1983, this boot has apparently also circulated as 'Napalm Gods', 'Possession', and 'Live In Amsterdam', along with this copy entitled 'Beware The Ghost'.

Comments: By the time of this tour The Sisters Of Mercy had already developed and honed their unique and somewhat haunting layered sound.

Their version of the Rolling Stones classic 'Gimme Shelter', remains one of my all time favorite cover versions.

The band are touring again this year, and who knows ! although their recorded album output is pretty intermittent, their site suggests that perhaps we will see something new later this year.

The Sisters Of Mercy

Beehive Candy said…
AS ALWAYS COPY AND PASTE THE LINKS: