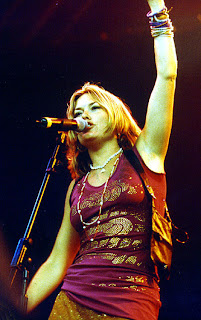 Comments: The live element may have circulated as 'Land of our Fathers' on CDR, beyond that I do not know much else about this gig. There's something a little bit special about great Welsh bands playing to a Welsh audience, maybe it's a Celtic thing.

Listening to this performance I think I know who the real headline act was on the night!

Beehive Candy said…
Click on the picture of Cerys or copy and paste the link below: