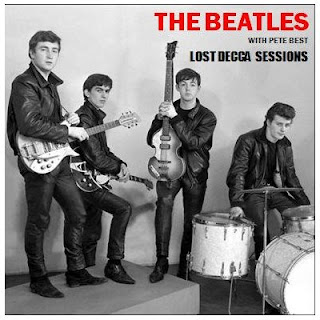 Reloaded 29/May/2015 - another Beehive Candy favourite for so many reasons. The historical aspect speaks for itself, however musically it just makes me wonder what would have happened if Decca had signed them that day. Would the musical styling have altered and would Pete Best have remained on drums for example. All hypothetical I know however perhaps Decca's loss was everyone else's gain as things turned out. It all seems a long time ago now.

The Decca audition is the name given to the now-famous audition by The Beatles for Decca Records at their Decca Studios in West Hampstead, London, England, before they reached international stardom. Decca's decision to reject the group is considered to be one of the biggest mistakes in music history.

Manager Brian Epstein made numerous trips to London to visit record companies with the hope of securing a record contract, but was rejected by many, including Columbia, Pye, Philips, and Oriole.

The Beatles were driven down to London by Neil Aspinall on New Year's Eve in 1961, for a Decca audition, but Aspinall lost his way, and the trip took ten hours. They arrived at 10 o'clock at night, and John Lennon said that they arrived "just in time to see the drunks jumping in the Trafalgar Square fountain." On 1 January 1962, Paul McCartney, John Lennon, George Harrison and Pete Best were auditioned by Decca producer Tony Meehan (ex-drummer of the Shadows) performing a total of fifteen songs in just under one hour. All the material was selected by Epstein, who decided on a selection of covers that the band had performed in various clubs over the years, interspersed with three Lennon/McCartney originals. The Beatles later found out that Epstein had paid Meehan to produce the studio recordings.

Eventually, Decca Records rejected The Beatles, saying that "guitar groups are on the way out", although it has since been suggested that their work that day did not yet reflect their true potential, and the "guitar" comment may have been intended as a polite let down.
Decca instead chose The Tremeloes, who auditioned the same day as The Beatles, were local and would require lower travel expenses.
The Beatles went on to sign with EMI subsidiary Parlophone, after their 'comedy album' producer George Martin heard the Decca demos and decided to meet the band. In 2007, Dr. Ebbetts Sound Systems released a CD version of The Decca Audition.

Genre: The Beatles will do.

Comments: I have sourced a reasonable amount of the information regarding this recording from Wikipedia, and although these recordings have been in circulation for decades, with some 'semi official' releases of the material often minus the Lennon/McCartney material, this is by far the best audio copy of the sessions I have heard, and is complete.

Some of the sessions were also released as a series of bootleg 'promo' singles on coloured vinyl back in 1976, along with full colour picture sleeves on 'Deccagone records'.

David Bruce-Casares said…
Never mind - I found the tracks -- thanks!