Sarah Neufeld has a strong solo career developing alongside her familiar touring with Arcade Fire. Her violin orientated solo work looks set to expand further with this exciting and intriguing song from her forthcoming album (no release date set as yet). The track 'We've Got A Lot' features Sarah Neufeld on violin and vocals along with Jeremy Gara on drums, Colin Stetson on lyricon, and Hans Bernhard on bass. If you want to much information then it was recorded by Hans Bernhard and Corwin Fox, mixed by Mark Lawson and Hans Bernhard, and mastered by Harris Newman. Sarah is touring still with a few more dates to go, on her website HERE. Well this is a welcome development and if the plan was to fill us with expectation, it has worked! 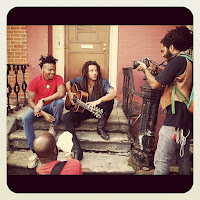 Meridian Lights are new to us and we are mightily impressed. Some background - Meridian Lights is Bradley Valentin and Yohimbe Sampson. They grew up creating and performing music in their homes with their families in their Bed-Stuy neighbourhood as a part of celebrating the greatest moments of life, maintaining optimism during its trials and music of course, served as an outlet for their own self expression.

Yohimbe is a self-taught guitarist since a teen in popular Brooklyn rap-rock fusion band Game Rebellion. A neighbourhood party that turned into a jam session where Yohimbe grabbed a guitar and nobody dared to sing led Brad to step in, and they have not stopped playing together since.

Bradley; writing since a pre-teen, writes everything from short stories to poetry. He began singing in his mother’s church choir around the same time.  “At home I was introduced to many different genres and I always paid attention to the vocalist and their performance,” says Bradley. Their new ep “Meridian Lights”  fuses soul, world and electronica into an indie pop song set that touches on trial, optimism, love and some baby-making rhythms.

They have some live dates lined up as follows:

We are pleased to preview the music on Beehive Candy, however get behind this incredible duo if you like what you here, this is wonderfully crafted music and a delight to listen to! 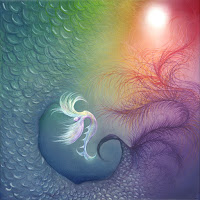 And the excellent music just keeps on coming (budding DJ or what?)...

This time in the form of Suris. and we have lots of background info to share with you - Suris release their debut album ‘Leap’ this July/August with it’s first single ‘Riverman’ in June. Members, Lindsey and Dave Mackie have written, recorded and produced this song collection with additional help from Samantha Rowe (Jon Lord, Emmylou Harris and Alex Banks) and David Ord. Also included is a cover of Jimmy Webb’s ‘Do what you Gotta Do’.

Lead by Lindsey’s arresting voice, the songs are more dynamic, memorable and richly textured than her 2012 solo album ‘Plaques & Tangles’, yet seductive and at times unsettling landscapes still dominate.

Fiercely independent, this Buckinghamshire based couple met while playing in different punk bands. They bring various touch points from the 70s and 80s to blend intricate guitar and piano textures with sweeping orchestration. No samples here, if whale song or crows are needed Lindsey records them herself .

The Mackie’s musical collaboration began during their early marriage, they met whilst at the University of East Anglia. Starting as a recording adventure with only a four track cassette recorder, they created a sound which caught the attention of both Nigel Grainge at Ensign Records and most notably from David Munns at Polygram, but ultimately it was Lindsey’s voice that garnered the most interest, and she went on to win a Sky TV talent contest as a solo singer.

Just as the industry was beginning to take notice, the untimely death of her manager meant she lost her chief hustler and to further complicate the mix, she became pregnant. Two children later, the Mackies remain doggedly self-sufficient, instinctive and  passionately committed to the song. They finish off each other’s musical sentences, are multi- instrumentalists and, with a family and real life to skim off affectations , there’s little time or interest in ego.

Lindsey’s song-writing is intelligent, emotional and distinctive. Her performances range from the restrained cool of Absolute Zero to the uninhibited, underwater yowling of Scaur Bank. With Dave’s production skills Suris create, in their own space and time, a unique and enduring sound.

Check out just how good Suris are with the video below, this is a fabulous album with many strong songs, if you like 'Riverman' you will have to get the album when it's released! 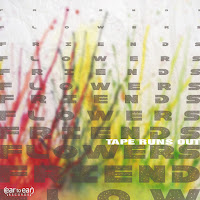 Tape Runs Out next, and a couple of impressive songs 'Friends' and 'Flowers'. Here's what the promo had to say - Tape Runs Out unashamedly display their edgy, refreshing pop-mindedness in these two tracks, with a potent elixir of guitars, hooks and the familiar soft hush of early 90s male vocals. This release includes the hallmark “Friends”, a layered jangle anthem sure to inspire dreaming and gazing, and the stand-out track “Flowers” is reminiscent of ‘Rock Action’ era Mogwai on ecstasy with a remarkable Cure-laced cool-down effect.

One of the most exciting bands to come out of Cambridge in recent times, Tape Runs Out have being enthralling audiences around England for the past two years.  Variously described as indie, shoegaze, dream pop and electronica, they have carved out their own sound by blending cleverly crafted melodies, melancholic ambience and dreamy reverb-tinged rhythms. Headed by Liam Goodrum-Bell, Tape Runs Out's music is infectious with a modern and unique twist, defying stereotypical trends with songs for those who love to absorb the music, as well as for the most intricate and scrupulous music lovers.

The single is released on Ear to Ear Records (HERE), and in our ever humble and unassuming way, we simply say if you like anything folk pop come shoegaze with hooks that can really hook you then Tape Runs Out may well delight your fine ears! 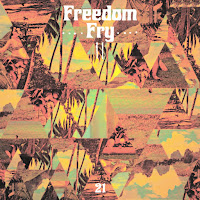 Freedom Fry we are reliably informed, is the combination of French songstress Marie Seyrat and Michigan-born musical chameleon Bruce Driscoll (also of Blondfire). The song we feature here has a pretty unique thing or two about it as Freedom Fry explain - “21” was recorded with the help of the audiences we had during the first three nights of our residency at The Echo in LA. The first night they provided the hand claps, the next the group vocals, and for the grand finale they gave us the most stretched out scream we’ve ever heard.

“21” is about feeling high on all the possibilities of a life that lies ahead. It’s about celebrating the time we're alive.
- Bruce & Marie

All Beehive Candy will add is just how old we are getting but hey! lets not get in the way of these annoyingly young people enjoying themselves... Actually it's a catchy, hooking song that will get inside your head, don't say we didn't warn you!

Finally in this round up it's a case of "last but most definitely not least". Poema have released the new single 'Forget You in LA' and we are finding it massively addictive!

There's more to come as the promo tells us - Poema's new EP, Pretty Speeches, will be independently released on Friday, July 10. This EP marks the first project from the sister duo since parting with Tooth & Nail Records in early 2014.

The EP showcases a new direction for Poema which sees Elle & Shealeen Puckett experimenting with pop grooves and laid back guitar. "For this collection of songs we gave ourselves complete freedom. No boundaries, no time limits, and nothing to distract ourselves from pulling out the best material we could," reflects Poema's Elle Puckett.

Recorded in the duo's adopted town of Nashville with producer Nolan Rossi, Pretty Speeches, is Poema's first release as an independent group.

So enjoy Poema's single as we start the countdown for July 10th with eager anticipation. Keep up to date with them on their website HERE. Failure to acquire 'Pretty Speeches' will render you uncool, you have been notified...