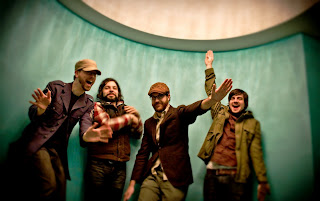 I may be a little late in on The Dimes, who are based in Portland, Oregon, and made quite a splash with their 2007 debut release, The Silent Generation, getting praise and from everyone from SPIN and Magnet Magazines... to USA Today and NPR... and a ton of blogs including Large Hearted Boy, KEXP, Three Imaginary Girls, Pampelmoose and many others.

Having received some promo material back in June, I kinda lost site of this one until I decided to spend some time going through each mail, and am I pleased I listened to their 'New England' EP !

Based on real stories and events born of and around Boston, Massachusetts, the four song EP is rich with texture and a consistent pastoral thread, complete with mandolins, acoustic guitars, stomps, claps, banjos, melodicas and more pop-laden harmonies than you'll know what to do with.

The record reveals a glimpse of the latest material from The Dimes, as they wrap up a new full-length record based of the same themes, due out August 2009. The New England EP also contains a special John Lennon cover of Watching the Wheels - a song that is near and dear to Dimes singer-songwriter, Johnny Clay's heart.


MP3: Save Me, Clara
Web Link: Official Site , My Space.
Buy: The Dimes

On a separate note Beehive Candy will present new music recommendations on a rolling basis from now on, rather than monthly(ish) compilations, The Dimes seem a great place to start!
Beehive Recommends 2009 (MP3's)