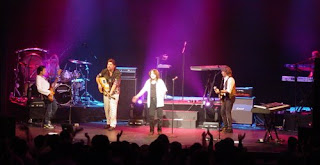 From the Alan Parsons Project website, regarding how the band got it's name. - In 1974 Alan Parsons was nominated for a Grammy award to recognise his engineering work on Pink Floyd's Dark Side of the Moon. Soon after that he and Eric Woolfson got together with Eric acting as Alan's manager for his engineering and production work. After a string of hits, Eric had the idea of making an album on the lines of developments in the film business, where directors such as Alfred Hitchcock and Stanley Kubrick were the focal point of the film's promotion, rather than individual film stars. If the film business was becoming a director's medium, Eric felt the music business might well become a producer's medium. As a songwriter, he had been developing an album inspired by the works of Edgar Allan Poe and he now saw a way to combine Alan's and his respective talents: Alan as the engineer and producer, Eric as the songwriter and musician.

Bearing in mind Alan's known association in the business with Pink Floyd and The Beatles plus the fact that Eric was also the manager of The Project, Eric felt it was better to use Alan's name as the figurehead.

Nico said…
Thanks for this excellent post, been a APP fan through out my entire life, and even had the chance to see him down here in Argentina some years ago. Thnks a lot for your effort in putting together this excellent blog, keep it up!.
Cheerz, N.
3 November 2009 at 18:06

Anonymous said…
A close listening IMHO is an A+ audience recording.

Konrad Useo said…
Many thanks.I was very curious how they would sound in the modern age.
8 November 2009 at 06:34