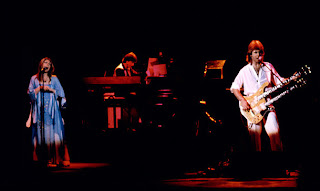 Reloaded 14/May/2015 - This has been requested for re-posting many times, however I do not know of any other file that has corrupted as much as part one of this recording, that said I am now hopeful that part one will work fine.

One of my all time favorite (officially released) live albums has to be Renaissance Live At Carnegie Hall from 1976. Despite the emergence of punk and the associated back lash to the 'millionaire rock stars' and the music business excesses, somehow Renaissance seemed to sit outside of the fury.

For me it was simply a band that were both astonishing musicians and writers rather than posers and pretentious, and their live performances reflected this. Annie Haslam's five octave range, and the balanced use of a live orchestra just added to the bands credibility'

This is a recording originally broadcast live on WNEW from a concert at the Academy of Music, New York on the 17th May 1974. It makes a great companion to the subsequent Carnegie Hall album and the sound quality is crisp and clear.

Renaissance (including Annie Haslam and Michael Dunford) will be performing live this summer, some forty years after the original incarnation of the band was formed.

1. Introduction & music
2. Can You Understand
3. Black Flame
4. Carpet Of The Sun
5. Cold Is Being
6. Things I Don't Understand
7. Running Hard
8. Ashes Are Burning
9. Mother Russia

The Academy of Music was a theater and opera house located at East 14th Street and Irving Place in Manhattan, New York City. The Academy was built in 1854 and seated approximately 1,500 people. It was rebuilt in 1866 after being destroyed by fire. It served as a venue for rock concerts in the 1970s, and in 1985 became the Palladium nightclub. The theater was demolished by New York University and replaced by the present Palladium Residence Hall.

staffie said…
Thank you for sharing this Mike. The wonderful voice of Annie Haslam and the music of Renaissance are a great favourite of mine.

staffie said…
I just unwrapped and part 1 is corrupt. Track 2 - Can You Understand. Could you please repost the track or part 1.

The sound of this boot is very good!

the links are dead, is it possible to reload ?

Anonymous said…
Hi,
Just adding to the others that part1
opens black flame and can you understand ... and not the rest. Does sound great though! hope you can fix this. Great blog.
17 January 2013 at 11:54

Anonymous said…
Thanks got some great stuff here, but first 5 songs in "a" are corrupt. Any chance of a re-up?