Well we are a little slow of the mark this month bringing you a selection of new music, so thats our current excuse for rushing headlong through eight great new selections of music that really do take us in different directions.

We start very gently with a track from 'Under The Sodium Lights' which is Drew Sullivan’s Slow Dancing Society latest ambient epic. We are told that "The album feels like a distillation of the three stunning releases that preceded it – and as such is Sullivan’s finest work to date. The delicate interplay between focused melodic details and blurred washes of sound draws the listener into a hypnotic state, where the waking world and the world of sleep cascade in and out of balance".

Or to put it another way it's a great selection of music that fans of ambient and mood music should love and a wider selection of people should also check out!

Under The Sodium Lights sees its official release on 30 September 2010 through Australian label Hidden Shoal Recordings. The album is also available as a digital pre-release now.

Producer and musician Cisco Adler, best known for his work in alterna-rap duo Shwazye, is preparing to debut his new solo project. Adler recently finished work on the albums of Mike Posner, Big B, G Love and Dirt Nasty. He will be introducing previously unreleased solo music as well as some new material he has started writing for an upcoming album.

Cisco Adler recently released “The Rough Demos”—three brand new solo songs, online for free on his bandcamp page. All of the tracks feature Adler’s ever-present California sound and distinctive production style. “Body Language” has a catchy, classic vibe to it, showcasing upbeat piano and horns. “California King” invokes the laid-back, SoCal theme that Adler is proudly known for. He mellows it out with a stripped-down, acoustic alt-country love song, “Maybe Never.” The range of styles and influences continues to demonstrate Adler’s breadth as a musician. 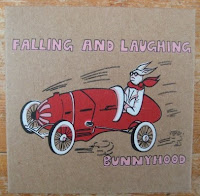 Falling and Laughing are a dynamic two piece band from Birmingham (England) who draw upon indiepop melodies and post-rock dynamics in order to make their sound.

The band stumbled out of Birmingham’s acoustic and open mic nights in 2007 when guitarist and singer Dunc met a drummer called Darryl and bassist called Stu Fletcher. This line up played across Birmingham learning the fine art of how not to do in-between song banter and winning a few quid on pub machines after the gig. Stu later moved away, but rather than replacing a good friend, the band slimmed down to their current two piece and they started gigging again in 2009.

The sound of just a guitar, drums and singing allowed the two piece to explore a whole new dynamic, the lack of instruments was more than compensated by Dunc’s quick chord changes and Darryl’s busy drumming which brought some kind of cheery intensity to the songs. It was harder to win on the pub quiz machine with one less member though.

The debut release 'Bunnyhood' by Falling and Laughing  hit record shops on 6th September. This is a super limited release of just 120 copies - which are going to sell out super fast. It comes in a deluxe card box and has a free zine about the EP created by the band themselves.

OK heres the background - Redstone Hall has been ruling the clubs of LA since their debut at the Roxy in 2003. The quartet – lead singer, songwriter and keyboard player Steven Rothstein; lead guitarist, songwriter and vocalist Zack Hall; bass man and vocalist Mac Hadar and drummer Mike Nussbaum – is known for exciting stage shows that combine rock, funk, soul, blues and pop, with an expansive improvisational element.

The band started as a heavily improvisational unit, playing progressive compositions that allowed the members to show off their instrumental skills, but they evolved rapidly. The band was soon drawing on the sounds of the soul and rock of the 60s and 70s, writing tunes that were more focused and hook driven without sacrificing their originality or complexity. They began headlining clubs and creating a street-level buzz. Music Connection named them one of LA’s top unsigned bands in 2008.

They took a few tries at making a debut record, but their eclectic blend of styles confounded producers. Then they met Dave Cobb (Shooter Jennings, Jack White, Nico Vega.) “We were more of a live act than a recording band,” Zack Hall says. “Dave knew what we were going for and helped us get it.”

Cobb recorded the band live, using vintage equipment to capture their forceful live energy and expansive sound. Brian LeBarton (Beck’s keyboard player) helped out with keys on a few tracks. “Dave understood our modern take on retro styles and pulled the best out of us,” Steven Rothstein says. “We had a bunch of tunes we’d road tested, but Dave encouraged us to stretch and challenge ourselves.” Rothstein and Hall went on to write most of the EP during the recording sessions, giving the music an immediate feel that’s palpable.

Having heard the featured song from the forthcoming release of brand new EP "ElePhant" (out October 5th), Beehive Candy strongly recommends checking this band out further - we intend to. 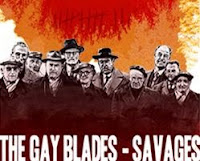 The NME wrote regarding The Gay Blades "Prepare to have your love defribulated by the raw, garagey sound of these two reprobates, strutting on to our airwaves with more saw-riffed swagger than a dog with two dicks and cougar's yowl. Clark Westfield and Puppy Mills are bad, bad men, and we love 'em".

Our featured track "Try To Understand" is from their album Savages which is out on the 5th October. Now if you go over to their official site you can send a tweet to your friends and then receive a copy of this song.

We just happened to have short cut the process because we here at Beehive Candy are on occasion 'bad bad men' ourselves. Seriously the forthcoming album sounds like it gonna be a good one if this song is anything to go by.

We featured this band back in May and Thicker Milk, the sprawling twenty-one song opus from Norfolk, Virginia’s The Super Vacations, finds the band expanding in all manner of ways. We are reminded that "since the release of their self-titled debut in 2008, the band has expanded its ranks to a formidable five-piece, giving the band’s psych-surf nuggets a bigger, more aggressive, and occasionally darker sound".

Recorded over the past two years by the band in various locations, Thicker Milk is a record that dips its toes in psych, surf, pop, and points in-between without ever sounding nostalgic or dated. Over the course of thirty-five minutes, the band whittle their precision riffs and ethereal harmonies down to perfect pockets of sound. Sample track suggest this will be another good one.

Thicker Milk will be available September 14th, 2010 via SHDWPLY Records.

MJ Hibbett & The Validators released the world's first true download single 'Hey Hey 16K' in 1999. Rob Manuel's video for this song became a massive viral hit in 2004 and has since been downloaded over three million times.

Well thats what they tell us and who are we to argue. Indeed we received an email direct from them which charmingly started -  'Hello! Hope you don't mind me emailing out of the blue like this, just wondering if you'd have time to maybe have a listen to our rather exciting new album?'

Not only do we not mind, but because we are enjoying the two albums you sent us so much, we thought we would copy and paste the whole press release!

Indie legends MJ Hibbett & The Validators are releasing two rarities
albums for the price of one and promoting them with a three month tour
in a pub. The albums feature songs played on Radio One, in viral
videos, and in the offices of Marvel Comics.

Forest Moon Of Enderby is a collection of 12 rare b-sides with an
extra 23 track album of further rarities called Hibbett's Superstore
on the CD-R. Leave My Brother Alone was featured in the band's live
Radio One session at Maida Vale while Data Storage Thing appears on
the multi-million download Samsung SSD Awesomeness online advert. The
Ballad Of Alan Moore is a tribute to the comics genius which has been
admired by the editor-in-chief of Marvel Comics as well as Mr Moore
himself.

Tim and Emma from The Validators are currently living in Mauritius,
making conventional touring impractical, so MJ has decided instead to
do a three month tour in his local pub. From 11 October he will be
performing acoustically every fortnight in the upstairs room of The
Lamb in London and releasing each show as a free podcast.

"Doing the shows as podcasts is a fantastic new way to tour", says MJ
Hibbett. "It allows thousands of people to enjoy relaxed and intimate
performances, while the performers themselves get to go home to their
own beds afterwards. Everyone's a winner!" Special guests include
Chris T-T, The Bobby McGees, Gavin Osborn and members of Pocketbooks.

MJ Hibbett & The Validators have always been at the forefront of new
developments in music on the internet. They released the first
download single, created one of the earliest viral videos, and
successfully used web promotion to stage a series of shows at the
Edinburgh Fringe. Their next project will be even more ambitious - a
full cast rock opera about Space Dinosaurs!

Now thats what we call an unashamed plug, see what happens when we really like an artist! MJ Hibbett & The Validators: Forest Moon Of Enderby is available from 18th October via Artists Against Success on CD and as a download. 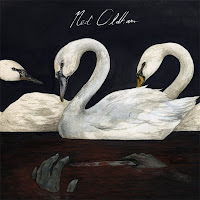 The three song EP including the featured song 'The One Light' is the first solo release by Ned Oldham (of The Anomoanon fame and brother of Will Oldham aka Bonnie "Prince" Billy).

Recorded in Baltimore at the Blue Third Floor and released as a limited edition (small run of 500) 7" record on colored vinyl, these are the first recordings since 2004's Joji by The Anomoanon.

The EP, titled Let's Go Out Tonight, carries a lot of weight in the three songs; though steeped in Americana and folk traditions, the tracks showcase Ned's penchant for bitter to bright lyrics and beautiful compositions.

This is a great way to end this edition of 2010FM and we here at Beehive Candy just hope we get to hear as much new music from Ned as we have over the years from his brother. For some reason the featured song reminds me of Buffalo Springfield however Ned's vocals are quite distinctive from Stepehen Stills. The comparison is meant as a compliment, this is a lovely track, enjoy!