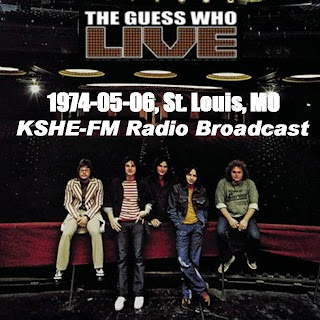 The Guess Who are a Canadian rock band from Winnipeg, Manitoba. Initially gaining recognition in Canada, they also found international success from the late 1960s through the mid-1970s with numerous hit singles, including "American Woman", "These Eyes" and "Share the Land".

This concert  performed at The Ambassador Theatre, in St Louis, MO, on the 6th May 1974 was one of the last show before guitarists Kurt Winter and Donnie McDougall left the group and is considered by a good number of fans as the overall best line up.

Broadcast live on FM by radio station KSHE (the source of this recording), the concert is both fascinating and a testimony to the band getting on with the job when the bass amp fails and a probable electrical outage left the band with no option early on but to do a couple of unplanned acoustic numbers "Artificial Flowers" and "Sour Suite" both of which actually add to the gig and are well received by the audience.

The concert performance is superb and just builds and builds after the early technical problems, the only downside is the radio presenters need to fill any natural gaps with inane commentary. I have no idea of what format KSHE operated at the time of this concert (by the fear of silence it may have been top 40?) however amusingly for me the DJ's compulsive need on a few occasions to 'say something' actually gives this gig a more historical nature now. Oh whatever! the DJ is at best a mild irritant and the concert remains a gem.

Robert said…
KSHE was St. Louis' first FM rock station, and in '74 it was AOR before that format even had a name. They haven't changed much since then, and they are possibly best known for "K-SHE classics" - relatively obscure tracks which developed a loyal following here but never really broke nationwide. The prime example would probably be J.D. Blackfoot's album "The Ultimate Prophecy" - I won't be surprised if you haven't heard of it. Its popularity in St. Louis was so great that when Blackfoot decided to record a live album, he came to St. Louis, possible his only fan base.
29 January 2011 at 04:04