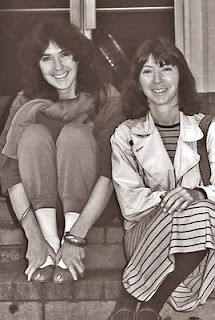 This is Kate & Anna McGarrigle performing live with a sizable studio audience in Cologne, Germany for WDR (TV) in Studio 'L' back on the 3rd February 1977.

As was so often the case when the McGarrigle sisters performed the atmosphere was informal and homely, the singing and musicianship counted for everything as is demonstrated in this recording where the monitors were failing and the band rightly demanded better. That said with difficulty hearing themselves in the mix the actual performance was both stunning and moving.

In 1975 the sisters made their first LP, Kate and Anna McGarrigle (Warner BS-2862), which brought them critical notice and concert engagements internationally. After their London debut 25 Jul 1976 at Victoria Palace, Michael Watts in Melody Maker (31 Jul 1976) called their music 'a holy marriage of strong sentiment and brilliant, pure singing ... Anna's, lilting and airy, Kate's, deeper and fiercer - these are amongst the very best voices to be heard in popular music today.' The McGarrigles returned to Europe the following year but generally maintained a sporadic touring schedule.

Their songs have been covered by a variety of artists including Maria Muldaur, Nana Mouskouri, Linda Ronstadt, Emmylou Harris, Billy Bragg, Chloé Sainte-Marie, Judy Collins, Anne Sofie von Otter, and others. The covers of their songs by well known artists led to the McGarrigle's getting their first recording contract in 1974. They created ten albums from 1975 through 2008.

Anonymous said…
Hi, found this today.. me heart flipped! thanks a lot for this nice stuff!