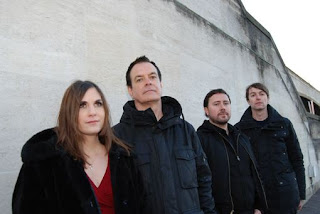 This is The Wedding Present performing live at the WFMU showcase event in Austin Texas. WFMU held a showcase independent of the SXSW Festival at the great Beerland in Austin TX on March 17th. It was a six band event featuring Electric Jellyfish, Death of Samantha, The Wedding Present, Supreme Dicks, Xray Eyeballs and The Men. They aired sets live over WFMU (91.1/90.1-FM NY/NJ) with a stream at wfmu.org . The gig was then made available at the Free Music Archive where WFMU are a curator.  The Wedding Present are a British indie rock group based in Leeds, England, formed in 1985 from the ashes of the Lost Pandas. The band's music has evolved from fast-paced indie rock in the vein of their most obvious influences The Fall, Buzzcocks and Gang of Four to more varied forms. Throughout their career, they have been led by vocalist and guitarist David Gedge, the band's only constant member.  A new Wedding Present album, 'Valentina' was released in March 2012. Shortly befo
2 comments
Read more
More posts