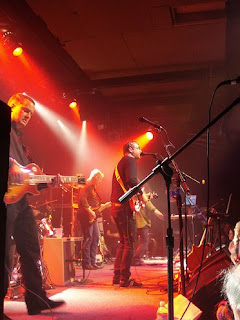 This is Camper Van Beethoven live at the  40 Watt Club in Athens, Georgia, USA earlier this year on March 2nd. The band have a simple taping policy. It's okay with us to tape live Camper Van Beethoven performances and trade them freely, so long as no money changes hands. You send 'em a blank, they make you a tape, and vise-versa. As soon as money enters in on any level, it's a commercial transaction; and with our music, decisions on commerce are ours and ours alone. This is a really superb recording both audio and performance wise. From wikipedia - Camper Van Beethoven is an American alternative rock group formed in Redlands, California in 1983 and later located in Santa Cruz and San Francisco. Their eclectic and ever-evolving style mixes elements of pop, ska, punk rock, folk, alternative country, and various types of world music. The band initially polarized audiences within the hardcore punk scene of California's Inland Empire before finding wider acceptance and,
1 comment
Read more
More posts