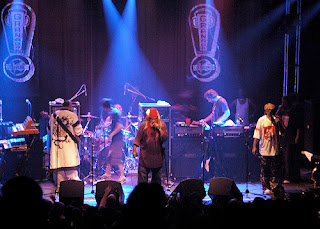 Reloaded 11/May/2015 - This feature first appeared on Beehive Candy back in March 2008, we were a young music blog, full of excitement that people were actually visiting us, sometimes as many as 25 in one week (yes a whole 25). To be honest we enjoyed being a part of the party back then, although I think we took ourselves a little to seriously! This remains a good recording of George Clinton & his many fine band members. Not sure if all the links still work, however this has been requested for re-uploading many times by passers by so the one that matters does!

I first became aware of Parliament through the album 'Mothership Connection'. All things Funkadelic, George Clinton, and P Funk naturally would follow. To be honest at that time in the 1970's my personal music taste was dominated by rock and punk and the whole new wave thing here in the UK.

However Parliament were one of those 'cross over' bands, that I expect registered with more than just me, a stereotypical rock music fan of the era. Trying to separate George Clinton, Parliament and Funkadelic in the late seventies is a tricky business, so I will take the convenient way out, along with many others and treat them as one act.

Music purists can find out more about the Mothership Connection album HERE, Parliament HERE, or visit George Clinton's My Space site HERE. George Clinton and Parliament / Funkadelic continue to tour and astound as I type this post, (and have done so, for along time after this originally appeared on Beehive Candy).

Anonymous said…
Thanks for sharing this and the Free concert. Martin from Canada.
11 March 2008 at 00:02

Anonymous said…
Thank You Beehive! I Love YR BLOG!
Love Parliement/Funkadelic! Like You, Was Introduced through "Mothership Connection" by my punk rock friends back in the 80's. Saw Them a few times, and im always amazed by how many people George Clinton can fit on any given stage!
-johnnylove
11 March 2008 at 19:53

the stranger said…
thanks for this post and all your other hard work!!!

Tear The Roof Off!