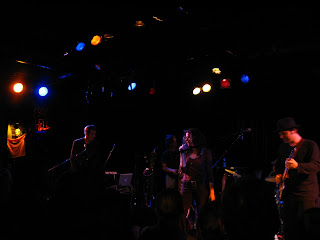 From the Internet Archive this is Edie Brickell and New Bohemians Live at Martyr's, Chicago, Illinois back on 25 October 2006.

For those unfamiliar with the band we are can learn the following from Wikipedia (assuming it is accurate and that can be a big assumption) - Edie Brickell & New Bohemians is an alternative rock jam band that originated in Dallas, Texas in the mid-1980's. The band is best known for their 1988 hit "What I Am" from the album Shooting Rubber bands at the Stars.

Their music contains elements of rock, folk, blues, and jazz. Following the release of their 1990 second album Ghost of a Dog, lead singer Edie Brickell married singer-songwriter Paul Simon after leaving the band. In 2006 they launched a new web site and released a new album Stranger Things. In recent years, the New Bohemians have released compilations and a live album and have recorded new material. In the mid-1990's Brickell, Bush and Withrow reunited as The Slip. In 2006 the current members reunited to record and tour with the release of Stranger Things.

Comments: This recording is available for download on the Internet Archive in FLAC, MP3 and OGG VORBIS formats HERE.