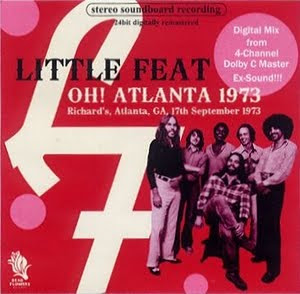 We first featured this recording in December 2009. We have now replaced this with a vastly improved audio version from the Internet Archive which also includes the full set.

This is Little Feat in concert at Richards, Atlanta, Georgia, USA back on the 17th September 1973. The bands first two albums, 'Little Feat' and 'Sailin' Shoes', received nearly universal critical acclaim, and Lowell George's song 'Willin' became a standard, subsequently popularized by its inclusion on Linda Ronstadt's album Heart Like a Wheel.

Lack of commercial success led, however, to the band splitting up, with Roy Estrada leaving to join Captain Beefheart's Magic Band. In 1972 Little Feat reformed, with bassist Kenny Gradney replacing Roy Estrada. The band also added a second guitarist, Paul Barrere, who had known Lowell George since they attended Hollywood High School in California, and percussionist Sam Clayton. Both Barrere and Clayton added vocals on many songs, although all the band members provided backing vocals in various tunes.

This new lineup radically altered the band's sound, leaning toward New Orleans funk, musical influences and styles. The group went on to record 'Dixie Chicken' which was promoted on the tour that included this gig, and went on to be one of the band's most popular albums.

Sound Quality: (From the Internet archive) - Just to set the record straight, this recording is in fact a live board mix. It was recorded onto a cassette master, using a Stevenson Interface sixteen channel console (where only fifteen channels were working).

The drop outs and missing parts are due to years of playing the master cassette on substandard tape decks, and getting chewed up in the process. The engineer is Mike Hatchett, who worked there until joining Little Feat on the road. He has two album credits. One is on "The Last Record Album", and the second is on "Hoy, Hoy".

Considering the lower quality recording devices used, it still is one of the best live/Lowell George recordings out there. The Mel Blanc and "China White" recordings came from Mike Hatchett's personal collection of recordings.