The Story So Far - Having firmly established themselves within the inner circle of Nashville's elite, UK band Honey Ryder return to spearhead the British country crossover invasion with their third studio album, 'Born In A Bottle'. To celebrate this they have announced a mini tour.

Honey Ryder have already kicked off a busy festival season of touring with two performances at C2C at the O2 in March, followed by the Isle Of Wight Festival in June. Following this, they will be appearing at Weyfest and Fort San Antone Festival later it the year. The tour kicked off on the 30th July in London and the band will be on the road for the rest of year.

'Drink With Me' is the first single from the album. "We wanted to write a summery feel good song about hanging out with friends and partying, inspired by the bright lights of Downtown Nashville", explains lead singer Lindsay O'Mahony. "We had just come back to our hotel after a fantastic night at a bar called Pucketts, where we feasted on deep fried green beans and drank beer out of jam jars, and felt inspired to write, so we started jamming and within a few hours the song was pretty much finished. We then recorded it a few days later over at Ocean Way".

Honey Ryder sophomore album 'Marley's Chains' was a big hit on Radio 2 and achieved album of the weeks on the likes of Smooth Radio and Music Week. With hits such as 'Fly Away' and 'Marley Chains' the album received huge support all over the world, and 'Born In A Bottle' is sure to share the same success.

Honey Ryder clearly have some Nashville influences, however these add to their sound rather than dominate. There is a healthy amount of UK folk and folk rock, that gives them their own sound and styling. A very good album for anyone who likes this cross over country music.

Eternal Death - Background - Eternal Death consists of Elin Berlin and Johan Angergård. Johan explains how it started - “Eternal Death was a solo project of mine for a month or two. When I had finished what I thought would be the first single it struck me that I didn’t want to play live, I didn’t want to appear in photos, I wasn’t that interested in doing interviews and I wasn’t very keen on singing. I didn’t want to be anything an artist is supposed to be or do anything an artist is supposed to do. I’m a big fan of Elin Berlin’s solo work and we had been in touch for a while. I asked her if she might want to be involved with Eternal Death, and we tried a couple of songs together. It worked out magically.”

Elin Berlin noted, “On my first trip to Stockholm, I really didn’t know what to expect. I had heard one noisy, instrumental song, and I knew that it was supposed to be called “Eternal Death”. But the concept; electronic pop music with lyrics that question our existence, faith and afterlife was very intriguing to me. When we started recording, I lost all that uncertainty. My tender voice in contrast to the harsh, almost industrial music creates a beautiful atmosphere. Anxiety is something I possess in abundance, and I tend to comfort myself with the somewhat cliché-ridden quote, ‘the darkest nights produce the brightest stars’.”

Their debut album, which is simply called, Eternal Death, was released on Labrador Records earlier this year. The reason for featuring them now is to mention their new video for 'Cry' which is featured on our BeeVids page. Also as this was released when Beehive Candy was enjoying it's 'extended siesta', it seems only fair to mention that the music is excellent and worthy of checking out. Another fine song ' Violence' featured below. 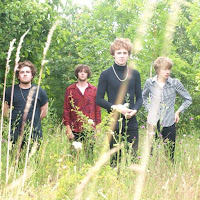 Background words - 'Dark Around the Eyes' is the latest release from Orange Vision, a band firmly in the ascendant having already enjoyed support from Huw Stephens on BBC Radio 1 and Steve Lamacq on BBC 6 Music as well as earning coveted support slots for Superfood and Honeyblood on the NME New Breed Tour.

Formed two years ago when Ed and Matthew bonded over a love of clothes, music and a generally delinquent approach to their depressing surroundings and sapped music scene, they were later joined by Daniel and Jake. The band became a primary focus and what started as a driving growling rock and roll sneer has blossomed into a post punk psychedelic new wave dream.

So many genres mentioned above, it is fair to say they are all in part, applicable to Orange Vision however this band has enough of their own creative drive, for the mention of genres only to be a reference of sorts. There music put simply, is very likeable, the energy addictive.