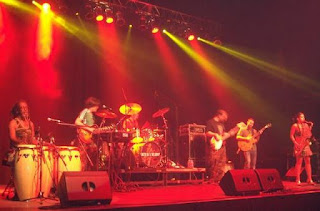 From the Internet Archive this is Dub Is A Weapon performing live at the Outback Lodge, Charlottesville, VA, back on the 9th July 2005. This is a remarkable band whose live dub performances are a real treat to enjoy.

Describing the formation of Dub Is A Weapon we quote the following - “It can’t be done, man!” That’s what Dave Hahn, mastermind behind Dub Is A Weapon, heard when he first floated the idea of a live dub group, as he and his mates listened to some prime 1960s King Tubby cuts in the band van. “Everyone seemed to think you could only do dub in the studio,” Hahn recalls.

Hahn set out to prove them wrong, with skills learned live and on the road, and with help from a Jamaican beatnik percussionist, an old high school friend, and young upstarts from the Brooklyn scene. Together they’ve honed their live take on the genre’s spaced-out grooves.

Concise Background - Founded in 2001, Dub Is A Weapon has set out on a mission to curate the history of dub reggae by offering their unique perspective of dub studio techniques live on stage.The band has spent the last 10 years honing their craft on stage through headlining club tours across the country, supporting the likes of Antibalas, John Brown’s Body, Easy Star All Stars, as well as providing the backing music for the legend of the scene Mr. Lee “Scratch” Perry on his tours throughout North America.

Dub Is A Weapon’s national debut record titled Vaporized (released on April 26, 2011 by Harmonized Records) has managed to bring all those experiences together in a studio effort that was recorded in the tradition of old jazz records: live in studio. “From the Black Ark days of Lee Perry to Tubby's Waterhouse dubs and discipleship of King Jammy, it's good to see that DIAW are carrying on the torch for dub fans worldwide. Vaporized not only exemplifies the evolution of dub but pays tribute to its history by retaining key characteristics that make quality dub music what it is.” (Chuck Reinemann).


Dub Is A Weapon