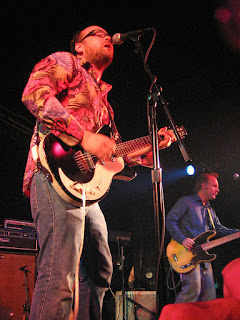 From the Internet Archive this is The Apples In Stereo Live at 40 Watt Club, Athens, GA, USA on the 12th August 2006. Legend holds that the legendary 40 Watt Club, was so named because in the early days the venue was lit by precisely one 40-watt light bulb. That’s not quite true, but it’s a good story, and in rock and roll mythology, the truth is always trumped by a good story.

Made famous by the booming Athens indie scene of the 1980s, the 40 Watt Club wasn’t initially a commercial enterprise at all. Like so many things in Athens during that era, the venue was a DIY endeavor from the get-go – a small rehearsal space and unofficial party spot operated by local scenester Curtis Crowe. The small studio was, at one point, lit by a single light bulb. But by the time it became a regular venue for Athens bands, the electrical situation had improved.

The Apples in Stereo are an American psychedelic pop and indie rock band associated with Elephant Six Collective, a group of bands also including Neutral Milk Hotel and The Olivia Tremor Control. The band is largely a product of lead vocalist/guitarist/producer Robert Schneider, who writes the majority of the band's music and lyrics. The band's sound draws strong comparisons to the psychedelic rock of The Beatles and The Beach Boys during the 1960s, as well as to bands such as Electric Light Orchestra and Pavement, and also draws from lo-fi, garage rock, new wave, R&B, power pop, punk, electro-pop and experimental music.

In August 2006, longtime drummer Hilarie Sidney officially announced her departure from the band during the band's closing set at the Athens Popfest music festival in Athens, Georgia. Her replacement, John Dufilho, lead singer and principal songwriter of The Deathray Davies, was announced in October 2006. 2006 touring member Bill Doss of The Olivia Tremor Control also quietly joined the band "officially" as its new keyboardist. John Ferguson of Big Fresh and Ulysses joined the Apples in 2007, also playing keyboards, and wearing a Doctor Who-esque space suit on stage.


The Apples In Stereo