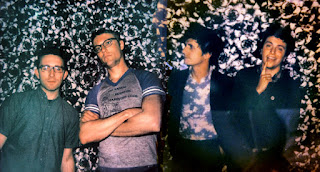 Philadelphia indie-pop outfit Literature just undertook a short tour with Baltimore's Expert Alterations. The two groups will be releasing a split 7" together on Square Of Opposition Records.

And part of their Bio - Philadelphia, PA's Literature features Kevin Attics, Nathaniel Cardaci, Chris Schackerman, and Seth Whaland. Attics, who'd written for numerous music trades as a teen, met Cardaci and Whaland at the house venue they both operated in Austin, TX. Cardaci and Whaland each ran small imprint labels and, a million adventures later, the trio decided to form a band. Upon moving to Philadelphia the group befriended Schackerman who also joined the fold.

Autumn of 2013 saw the band begin work on their second album, Chorus, with lauded engineer Gary Olson (whose body of work includes records by Crystal Stilts, Mad Scene and The Beets) at his Marlborough Farms studio in Brooklyn, NY. As a beautiful autumn turned into one of the harshest winters in recent memory, Olson and the band began stretching out, enhancing the album with studio techniques dating back to the late 60s including true-tape flanging, sending vocals through Leslie speaker cabinets, and the same analog style of automatic double-tracking created at Abbey Road Studios. The result is an album that is as immediate as it is timeless, full of effortlessly catchy and well-crafted tunes that echo pop legends like Smiths and Orange Juice. All of that time in the studio has resulted in a rich, considered sound that puts the band's arranging and playing front and centre. Chorus is one of the most exciting pop records in years, and marks Literature at true contenders.

OK so not the new track but one from last years 'Chorus'. It's upbeat, cheery, and a healthy reminder that it's not to late to discover this fine album. You can also check out the new video for 'The Girl, The Gold Watch And Everything' over on our BeeVids page. 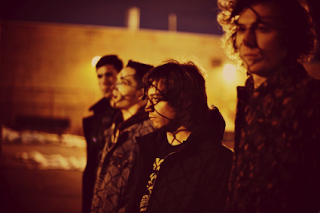 Silverbird - Lyfe (from the album Pureland).

Background - Pureland is Silverbird's debut album and is released on September 18th 2015.

Barr and English producer Kristopher Harris recorded Silverbird’s debut EP 'Surface Life', released in May 2014 to critical acclaim. Joined by Corey Davis on bass, Dan Whaley on lead guitar and Jacob Schuab on drums, Silverbird were soon selling out venues across NYC. With influences as diverse as Wilco, Heartless Bastards, and Sparklehorse, their music strides fearlessly through an ever changing emotional landscape. Infectious melodies and swirling, intricate rhythms combine to provide an absolutely enchanting soundscape.

2015 has already been incredibly busy for the band. The year started with two packed shows at the Brooklyn Night Bazaar and Black Bear, with many more shows and a tour to come. The track 'With the Spirits' from Surface Life was selected for the All Saints spring playlist and the song will be played in their 110 worldwide stores for three months. Tim is also featured on the packaging for Cakewalk’s Sonar Artist production software.

Lively and thoughtful indie rock, the featured track combines their softer side along with a more energetic start and finish, a good taste of a fine album.