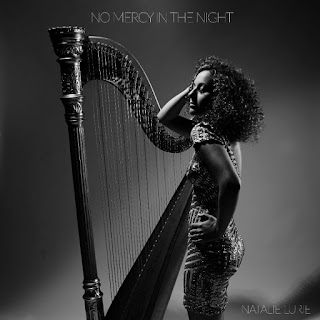 Natalie Lurie - No Mercy in the Night.

Natalie's fascination with the harp began at age 7 when she spotted the instrument in a music shop. She sat down and began strumming until the shop owner finally asked she and her family to leave because the store was closing. Natalie's harp studies have taken her across the globe. During her senior year of high school she attended the Jerusalem Academy of Music and Dance. After that, she studied privately in France and Switzerland, before returning to the US where she completed her undergraduate work under renowned harpist Susann McDonald at Indiana University.

Though she is classically trained, Natalie has always held an interest in expanding the harp beyond its traditional classical genre. Before moving to Nashville to pursue songwriting and performing, she spent time in Muscle Shoals, AL working with original session musicians from the 1960s. After releasing No Mercy In The Night this spring, she will move to London to pursue a Master of Arts in Harp Performance at the Royal Academy of Music.

This is a joy to feature on Beehive Candy. When I first looked at the picture in the promo I thought 'oh no, not a Joanna Newsom copy' regarding the harp. How wrong I was. Yes they both play a harp and there it ends. This is a carefully crafted indie pop song where vocals and a fine assortment of instruments (including the harp) deliver us, one very pleasing track. 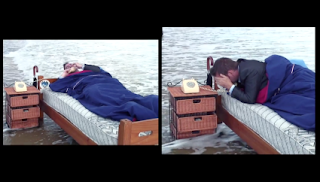 Background promo - Nub Music Release - 6th February 2016. How many people say they have woken up on Monday morning and thought, ‘I don’t want to go to work’. The life shared by 70% of the adult population of this country. Who writes songs for them, the grind, the frustration, the dreams? This classic British pop song swoons sympathetically with the mood of Blue Monday – statistically the most depressing day of the year, bringing a sparkle and humanity with it’s synth.

In the tradition of the Smiths or the Pet Shop Boys, The Boy from Space write classic pop songs about the life shared by those who didn’t go to Eton (or Rock School), and there are a lot of us. But if you think the dramas of everyday life make for dull music, listen to the melancholic synth-pop of Ugly – a riposte to Christina Aguilera’s ‘Beautiful’ (‘What if I don’t have within, enough to break out through my skin?’), or American Beauty with its amazing build up to a beautiful chorus and if there’s any doubt about the fact that these Space People can create extraordinary music listen to their floor-shaking rendition of Pink Floyd’s Lucifer Sam which quite possibly out-mads the original.

The Boy From Space fulfil the tradition of English eccentrics by the bucket load, but we’re not talking bohemian folk, staring into space, these guys Are from space, misfits caught between the mundanity of working life and the magic, wonder and awe of life in all its possibility.

There's a video for the above mentioned title track from the four song EP, that was filmed on Bournemouth beach not far from where I used to live (and still not really that far). However although that made me pay a tiny bit more attention to the music, how could you not like it anyway? They even manage to out quirk Pink Floyds 'Lucifer Sam' on this very enjoyable EP, video over on the BeeVids page. 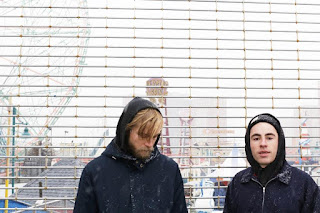 Background promo - In 2011 Nathan Quiroga (Mad Rad, Buffalo Madonna) and Benjamin Verdoes (Mt. St. Helens Vietnam Band) left their respective Seattle-based projects behind and began collaboration on Iska Dhaaf. The band was quickly embraced for their engaging live shows, and for creating the sound of a full band by way of two people. Together as songwriters they have steadily explored production, instrumentation, and an ever-expanding narrative voice.

After the release of their debut, Even the Sun Will Burn, they toured across North America, Western Europe, relocated to New York, and most recently wrote and performed in Paris and Berlin. Their upcoming album,The Wanting Creature, sees the duo emerging as producers, experimenters and genre-bending artists. The new songs show an ongoing devotion to lyrical depth and composition, and the album more fully utilizes their diverse musical backgrounds. Nearly five years in, they will surprise with their innovations-taking risks one would hope to see in a sophomore album. New album due out 27th May 2016 via Brick Lane Records.

There is something quite addictive about 'Invisible Cities'. Maybe it's the overall pace and the way the vocals glide over and along with the beat. Whatever, if it's meant to wet my appetite for the album, then it's a case of job done!