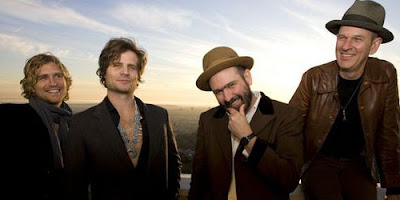 From the Internet Archive this is American Music Club (AMC) Live at Canes, Mission Beach (San Diego), CA, on the 18th November 2005. AMC were opening for Spoon and this was the last show of the tour. As one commentator put it - AMC opening for Spoon? That ain't right. And it sounds like some of those Spooners weren't bothering to hide their disdain, as evidenced by Mr. Eitzel's comment after the first song, "You don't have to like it; I don't care." Despite the audience, this is a great set with lots of stuff from AMC's then new album, including a high-energy performance of "Home."

A little about AMC - Their 1985 debut, The Restless Stranger, is widely considered as the first slowcore release, establishing the band as major pioneers of slowcore and an early influence on post-rock. It was later followed by 1987's Engine which saw record producer Tom Mallon as a full-time member. American Music Club earned a solid cult following on the strength of 1988's California. Their next LP, 1989's United Kingdom, appeared only in the nation which lent the record its name and consisted of new material, some of which was recorded live at the Hotel Utah in San Francisco.

In 1991 American Music Club emerged with the record that is widely considered their masterpiece, Everclear. Critical acclaim attracted the attention of several major labels. Rolling Stone called it the Album of the Year and named Eitzel Songwriter of the Year for 1991. Eventually, AMC now consisting of Eitzel, Vudi, Pearson, multi-instrumentalist Bruce Kaphan and drummer Tim Mooney signed with Reprise in the US and Virgin throughout the rest of the world.

The band reformed in 2004 with this gig forming part of the process of the band re-establishing themselves.

Intro
Why Won't You Stay
Home
Heart & Soul
Only Love Can Set You Free
Another Morning
Outside This Bar
If I Had A Hammer
Challenger
Patriot's Heart
Sick Of Food.

Comments: This recording is available for download on the Internet Archive in FLAC, MP3 and OGG VORBIS formats HERE.