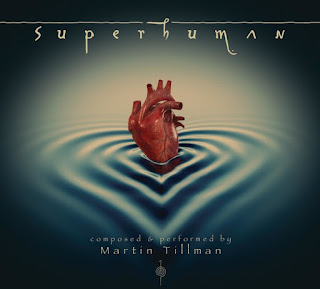 Martin Tillman - Notes Towards The Universe.

Background words - More than any other form of art, music transports us from the physical plane to a realm of reflection, dreams and excitement. Yet at the same time, we find ourselves swaying to the melody, if not dancing wildly to its rhythms. Such is the power of listening to Martin Tillman’s “Superhuman” a soundtrack for the composer’s upbeat imagination that rocks with his sense of stylistic and technological exploration, while jetting down to the EDM Earth his tunes encourage us to leap from. Mind and body are one as Tillman elevates body and soul in “Superhuman,” lighting a stylistic path with his distinctive fusion of music and movement.

As a world-renowned cellist whose distinctive playing can be heard on such scores as “Black Hawk Down,” “The Ring” and “Batman Trilogy,” Tillman’s equally distinguished career on the concert stage has drawn a number of renowned players to this ambitious project, among them guitarists Michael Landau (Michael Jackson, Joni Mitchell) Davey Johnstone (Elton John), Graham Russell (Air Supply),  drummer Vinnie Colaiuta ( Sting, Frank Zappa), Bassist Leeland Sklar ( James Taylor, Phil Collins),  vocalist Dee Lewis (Peter Gabriel, Jamiroquai) , Toto keyboardist David Paich and the  “City of Prague Symphony”.  All contribute to the rhythmically expansive, cello-topped sound of “Superhuman,” its eleven, stylistically diverse tracks made all the more cinematic by movie score mixer Jeff Biggers. “Because he has this tremendous experience on epic films, Jeff’s talent allowed me to treat ‘Superhuman’ as a soundtrack for the audience in a way that goes beyond incorporating EDM and rock and roll into my themes,” Tillman says.

Tillman hears “Superhuman” as an album that will unlock listeners’ own imaginations, in much the same way that the composer has transformed adversity into the thematically soaring, encompassing optimism of “Superhuman.” “Music lets us dream a different existence, and make it our own,” Tillman concludes. “It’s that spirit that’s now let me find a new, powerful way to express myself with ‘Superhuman.’”

'Superhuman' is an aural delight. If you are a fan of music by the likes of Vangelis, Jean Michel Jarre, and anything remotely like them, then put simply, you really should own a copy of this album. The featured song gives a small taste of what's in store on this diverse and expansive album. Production is wonderful across eleven inspiring tracks, it's a case of Hi-Fidelity heaven.