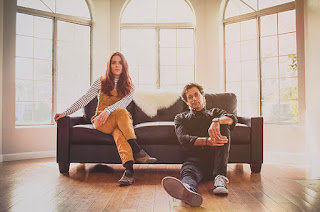 Highland Kites - This War Inside.

Background - Highland Kites’ confessional anti-folk could easily be misconstrued as indie rock. With their angular grooves, new wave leanings and sharp-witted lyrics, the LA-based twosome exude an off-the-cuff coolness that is effortlessly backed by a hard earned substance.  The band is the brainchild of singer-songwriter Marissa Lamar who spent the majority of her 20’s very ill with Lyme disease. As the symptoms progressed, Lamar medication increased and she found herself stagnating as the years passed her by. She watched friends fall away and became resigned to her predicament; not entirely sure she was going to make it. Music emerged as her saving grace; giving her a reason to persevere and ultimately share her life-affirming strength as she overcame her illness.

By weaving hope, positivity and closure into her songs, Marissa was able to create compelling and often dark content that ultimately felt uplifting. She still maintains her “goal with music is to make people feel better even though most of my songs are themed around painful experiences.” With a few original tunes under her belt, Lamar began gigging solo around LA and finally formed Highland Kites in 2014 with drummer Neil Briggs. Their first EP, So Vicious, caught the attention of producer Raymond Richards (Local Natives, honeyhoney, etc) who reached out to the duo about working together. They all clicked immediately and Richards ended up producing their first full length album All We Left Behind which climbed the college radio charts in 2015, with over 70 stations putting it in heavy rotation, and garnered notable mentions in local press including a glowing article in Buzzbands LA.

Marissa and Neil have again teamed up with producer Richards for their newest EP, Let Me Run, due out July 23rd. While the duo felt free to dive into a more into varied pallet of sounds, Lamar is admittedly a staunch purist about her work; keeping it is as close to its original state as possible. “I feel like parts of my past that I have had trouble talking about come out in waves and end up resulting in these songs and albums” Lamar asserts. “It's a form of closure for me and after writing Let Me Run I felt like a million bricks were lifted off my shoulders.”

'This War Inside' is the third of five songs on what is a splendid EP. Consistently melodic and varied in pace and direction, it's a fine collection of songs that deserve to be noticed. 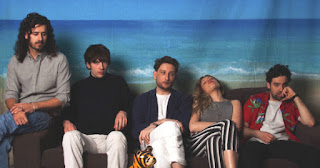 Background - With the recent BBC Radio 1 and 6Music approved single 'Not Fot Me' signalling a shift in their musical direction and line-up, London five piece Club Kuru are excited to share more of their mesmerising psychedelia in the form of brand new cut 'Tonight'. The track will hit download stores yesterday (here).

What was previously the "languid R&B/bedroom producer" solo project of Laurie Erskine, Club Kuru evolved into a full band set up after he and some musical friends built their own studio in north east London. In the process, the group realised a collective love of 60's and 70's American RnB and soul, and a mutual obsession with analog synthesis and classic songwriting. Thus the reincarnation of Club Kuru was born.

All self-written, recorded and produced, 'Tonight' melds hazy melodies with soulful vocals and gliding guitar riffs, inviting the listener on a journey into a sexy and sinister dream land. Through modern production and psych-leaning undertones, the revived formation is aligned with the likes of Unknown Mortal Orchestra, Tame Impala and Connan Moccasin, or in the words of the band as having "the backbone of Shuggie Otis, the head of Serge Gainsbourg, and the cinematic aura of Vangelis".

Club Kuru will be showcasing their very special live show at the forthcoming dates, with more to be announced soon:

'Tonight' is a gorgeous song. The various instruments seemingly melt into each other as the ethereal vocals fly above. Indie psychedelia, now that's one good genre. 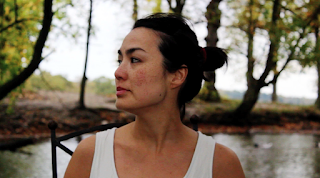 Born into an artistic family – her mother a Japanese poet, her father the legendary vocalist Paul Rodgers (Free, Bad Company, Queen) – Jasmine Rodgers knew her way around both keyboard and fretboard before she even enrolled at secondary school. But given her love for art and zoology (in which she has a degree), music was initially a passionate pastime rather than a full-time pursuit. This changed when her older brother Steve, on hearing the ethereal beauty of Jasmine’s voice, asked her to sing with him and they formed the group Boa. Boa went on to record two albums, achieving renown in the Americas, France and Japan, after their single ‘Duvet’ featured in the anime series Serial Experiments Lain. The group disbanded in 2005, but Jasmine continued her association with the anime/manga genre, writing songs for the soundtrack of Armitage: Dual Matrix, which starred Juliette Lewis.

Jasmine continued rehearsing, writing and recording, releasing an EP of self-penned alt-folk nuggets and collaborating with artists including Indian classical musicians Mendi Mohinder Singh and Waqas Choudhary. She found inspiration for new material in the exploits of her travels (live performances led her from the Royal Albert Hall to the Venice Biennale and the Edinburgh Fringe). It was one such journey to the Joshua Tree desert in California that inspired Jasmine to capture the best of her material on a full-length album. She enlisted producer Sean Genockey (Tom McRae, Futureheads), whose experience working at Joshua Tree’s Rancho de la Luna studio made him ideal for bringing forth the material’s widescreen yet rootsy vibe. Blood Red Sun, to be released later in 2016, was recorded at Black Dog Studios in London and is the sound of an exceptional artist drawing deep from global musical experiences to craft a set of inventive, euphonious 21st-century folk.

'Icicles' is a delicately crafted folk song, that is rich in textures and beautifully delivered, it's also highly addictive. 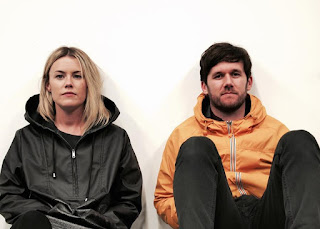 Background - New material from Hiva Oa has been a long time coming. Sometimes, it seems, a period of inactivity is better for a band than one of constant creation. With the release of their forthcoming EP mk2 (part 1), core members Stephen Houlihan and Christine Tubridy departed Edinburgh, returning to their native Ireland seeking renewed inspiration. Hiva Oa retain the mystery and ambition of their former incarnations, but inject a heavy thrum to their intricate patchwork style, and turn their attentions to themes of fear, loneliness, abandonment and awakening.

On lead single A Great Height the band continue their controlled experimentation by marrying primal, dizzying electronica and a swelling bass hum, with minimal guitar patterns to create a tightly wound, suffocating and intense atmosphere that sets the tone for the EP. Somewhat appropriately it’s an anxious listen, the influence of Thom Yorke on vocalist Stephen Houlihan here provides the forlorn, and almost hopeless, punctuating refrain “…and I fall from a great height.”  Elsewhere Seskinore demonstrates their skill in developing percussive motifs that flit from the suspenseful and shuffling, to eruptive, deafening, conclusions. A powerful resolution to each composition is never far from the minds of Hiva Oa.

The latter part of mk2 (part 1) begins to bring subtler intricacies to the fore. Christine is awash with swathes of gentle guitar, gifting the four-minute piece a transcendent quality that, coupled with another yearning vocal, offers the listener a brief glimpse into one of the EP’s more intimate moments, in this near-fearful, dream-like, serenade. Closing track Jonny Brazil again shifts unassumingly from sinewy indie-rock before revealing a raft of squalling guitars and inter-playing vocal melodies. Hiva Oa have become masters of developing atmospheres proving that, for them, a visit to old pastures has worked wonders.

Intense and swirling music drives 'A Great Height' along and the bare vocals work perfectly alongside. It may not be easy listening, however there is something quite compulsive here, that has me dipping back in for another play. 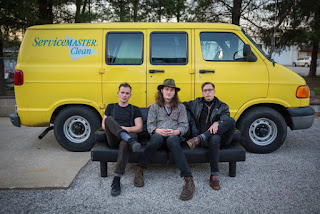 Background - Nashville three-piece vivid-pop band Harpooner will release their debut full length Rose Park on June 24th. Two years ago Harpooner migrated to Nashville from Indiana in search of better opportunities and a change of scenery. Since the move they have already shared the stage with Caitlin Rose, Margo Price, Cory Chisel, Water Liars, Future Birds, and Promised Land Sound.

Seated and singing close-up on the microphone, sometimes underneath a brimmed hat, Schmadeke delivers his cosmic awareness with a tenderness toward sensitive issues and big questions—like a Jeff Lynne that grew up in the suburbs of Indianapolis in the 90s. On “All I Get Back” and “Bigger Thoughts” he weaves the band in and out of sophisticated movements that shimmer and punch right on time—the kind of arrangements traded-in long ago by popular music for high-gain marketing strategies. He grapples with racial inequality on songs like “Carolines” and “Immigration” but not so that the songs become fodder for corporate social campaigns. Many of the songs on the album spring from a small fictitious midwestern town that Schmadeke imagines as a canvas for the ideas he and the band have picked-up along the way.

Morrow’s drumming is fierce and solid as a forging hammer made of electric current. And when performing live, Mullen, who stands between the other two, is the only one facing the crowd night-to-night—like a totem to calm confidence. Morrow cut his teeth on math-rock and has toured internationally with acts like Austin Lucas and Memory Map, while Mullen quietly makes furniture out of reclaimed wood in his basement to make ends meet. Schmadeke also plays keys in the band of Nashville singer-songwriter Andrew Combs.

Harpooner describe their music as vivid pop and having only heard 'Hush Up' so far, I think it makes for a pretty good description, that or vivid rock. This is an imaginative and powerful song, I would describe it as driving music, but only if you want a speeding ticket!