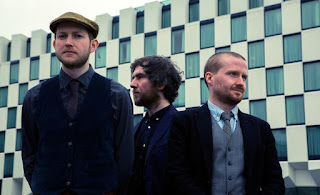 Background promo - There's a lot of life in the city. Growing up in the idyllic Irish countryside and finding a place amid the alien, urban sprawl had a huge impact on Divan. Their music; all pulsating rhythm, soaring vocals and oscillating guitars, draws on a rich tapestry of styles and sounds, which evolves into a real statement of intent: the desire to understand art and its relevance in modern life.

Singer, Jamie Clarke writes: 'I think always having an innate desire to surround yourself with activity & action when all you've known is peace & tranquillity comes out in our music. It draws me to people, and also to the art that I love.'

The lyrical narrative in Modern Knowledge weaves its way through such themes, affecting not just today's artists and creators but everyone that, like Jamie, is drawn to the bustle of something more than what was known... From experimenting with accessible but unusual time signatures in ‘Shards’ to exploring vulnerability both lyrically and vocally in ‘A Clarity Appears’, the heart and soul that runs through this record is achieved via subtle nods to the likes of Radiohead, The National and Richard Hawley, as well as the band’s own profound voice and subject matter.

There are mournful sparks of looped piano from Brent (Knopf) in ‘Darkened Room’ and dark melodies inspired by the encompassing warmth of Sufjan Stevens…while frontman Clarke’s subtly reedy voice is reminiscent of Benjamin Gibbard in his more delicate moments. Major chords are utilised to strengthen the depths alongside jolting, haunted stabs of guitar and the end result is compelling, intense and overwhelmingly thoughtful; demanding repeated listens.

Going by the song 'Sale Of Lakes' the transition from rural to urban life for the band Divan, has at least at a musical level paid off. Having gone in the opposite direction, I personally think both can help with musical creativity, however the urban sprawl does spark passion and reality, the case in point being this really fine song. 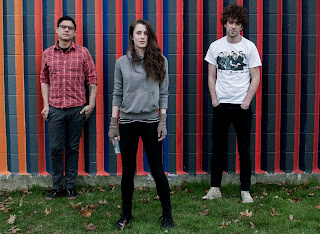 And the band say - We're a garage/street rock band from Allston, MA. Our influences range from local acts such as Fat History Month and Krill to the Mouldy Peaches, the Melvins, and Cat Power.

We formed in February 2013 when Katie and Matt met at the old All Asia Cafe in Central Square, Cambridge. She was working on a solo project at the time, as she didn't have a band. She mentioned she needed a drummer and Matt volunteered without having heard her songs. We played a show the next day without rehearsing and have been playing together ever since. We continued as a duo (guitar and drums), playing extensively in the Boston area at venues such as TT The Bears Place, Middle East upstairs, O'Briens, Out Of The Blue Gallery and Zuzu, as well as a handful of basement shows in Manchester NH.

We self-recorded and -released five EPs along the way, and completed our first full-length, professionally recorded album in January 2016 with Shaun Curran at Napoleon Complex in Somerville, MA. The following month (January 2016) we were joined by Natan Keyes on bass. Our plans are to continue playing locally and tour for the first time this summer.

'Homesick' is a little bit punky and garage, and a whole lot raw unrefined energy. It's good old rock'n'roll with attitude, and it never ceases to please.