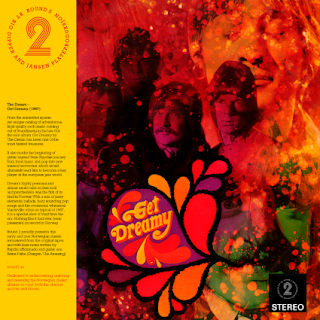 Background - From the somewhat sparse, yet unique catalogue of adventurous, high-quality rock music coming out of Scandinavia in the late 60’s, the sole album ‘Get Dreamy’ by The Dream has been one of the most hunted treasures. Originally released in 1967, the album proves that the youth of Norway were just as happy swinging as their Blighty cousins. It also marks the beginning of guitar legend Terje Rypdals journey from beat music and pop into new musical territories, which would ultimately lead him to become a key player in the European jazz world.

Any album that opens with a track (‘Green Things’) describing the heartbreak of aliens abducting your love, is clearly out of this world. But ‘Get Dreamy’ somehow fits there, and it doesn’t feel alarming when it takes you with it. Getting lost in the cosmos and making a great time out of it was the aim in ’67 and The Dream follow the tradition well. Having clear references to The Beach Boys (Driftin’), Floyd (‘Aint No Use) as well as some truly lust-filled riffs that sound like unreleased Hendrix tracks from a lost session, The Dream’s highly personal and almost fearless take on free rock and psychedelia was, actually, the first of its kind in Norway. With elements of jazz, glam horror (Hey Jimi), hazy sounding pop and the occasional whimsical Vaudeville-vibes so typical of 1967, it is a special slice of vinyl from the era.

Round 2 proudly presents this rarity and true Norwegian classic, remastered from the original tapes and with liner notes written by Rypdal aficionado and guitar ace, Reine Fiske (Dungen, The Amazing).

Comprising of ten tracks the reissue of 'Get Dreamy' takes us back to 1967, a time when a good number of bands were beginning to test the conventional pop music boundaries and psychedelia, was well into its first flourish of experimentation. The Dream however seemed to have already absorbed much of those values which is notable across the album, however the riff driven full on rock adds considerably more to the album. So there were most people in Great Britain thinking the Norwegians were still churning out their Nordic folk music, and it turns out they were having their own little summer of love...