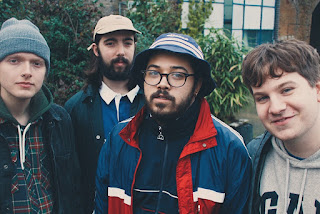 Background - Having only released one previous single (‘Eleanor’), which earned them plaudits from the likes of BBC 6 Music and more, Essex four piece Wayde are now ready to unleash their new Lucky Aide EP. Recorded in guitarist/vocalist Tyrone Foster’s flat in Stoke Newington, in between the banging on ceilings and floors from disgruntled neighbours, Wayde’s sound is an amalgamation of sardonic indie, enveloping shoegaze and psych-infused grunge. There is a nostalgic comfort amongst Wayde’s combination of warm guitars, mid-tempo grooves and vocals, which are lyrically sharp, saccharine and melodically contagious.

Speaking about the themes behind the forthcoming EP, Miles Shawyer (bass) said, “There’s no consciously imprinted themes on the EP, however the songs were all written in a period when we were all just about to finish university and the anticipation of having to become real people and getting jobs was looming. So there’s an almost entirely unintentional coming of age/fear of adulthood theme running throughout the EP.”

It’s this charming yet almost serendipitous honesty that resonates the loudest throughout every track on the EP. The themes come naturally and candidly, whilst Wayde place their focus entirely on infectious hooks, reverb and fuzz, only abating to take rapid turns into hazy garage-punk and feedback-laden grunge. Facebook here.

'Easy (don't be long)' has a slow haunting feel from the very start. Vocals are set deeper in the mix and surrounded by a wall of slowly morphing sounds and some thunderous moments, no wonder the neighbours felt the need to join in with the beats... 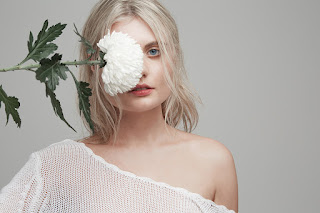 Background - In late September 2016, Línger released her debut single ‘Flyon’ and has already proven she is a powerful force to be admired. The single, and EP tuple were recorded in her home in Sydney, Australia, produced by fellow Sydney artist, Xavier Dunn. Her latest offering from the forthcoming EP is ‘Avoid’, a lush electronic-pop journey characterised by Línger’s signature vocal harmonies. They provide the foundations for an pulsing and dramatic electronic track, all supporting Línger’s beautiful melodic whimsies.

Línger is a collaboration between experience and emotion that has come to fruition through years of feeling, longing and by simply being. Her words, originating in part through the creation of poetry, seek to make sense of the world which at times mystifies us all. Her EP tuple is inspired by the five elements of air, fire, water, earth and space. Attuned to divinity, each of Línger’s songs is able to insightfully capture moments in time that reflect what it means to be human.

Flying on to the Australian music scene in late September 2016, Línger has already proven she is a powerful force to be admired. Línger has been featured on Acid Stag’s Australian artist to watch list, and received glowing reviews throughout the blogosphere. Línger will meet you in your world and her song will carry you upwards to a sky filled with ethereal beauty that is forever unfolding and everlasting. Facebook here.

This is our second feature for Linger following on from sharing 'Avoid' a few weeks ago. The new EP 'tuple' comprises of five tracks and I have chosen the final song 'Downfall' this time around. This is a refined collection of music and is well worth checking out. 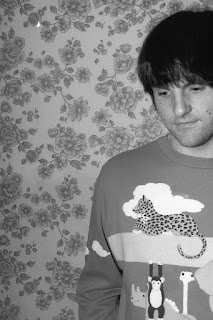 Background - Jackson Boone is a songwriter who quietly emerged from the misty magic of Portland, Oregon. His lo-fi folk rock sound is comparable to Kevin Morby, Kurt Vile, or Damien Jurado.

With the help of producer Riley Geare (Unknown Mortal Orchestra), bassist Randy Bemrose (Radiation City), and Violinist Patti King (Radiation City), Jackson recorded his first solo album, 'Starlit,' in the basement of a green house in NE Portland. Immediately after his release, Boone, his five piece live band, The Ocean Ghosts, and Riley Geare, packed up their equipment and took off to the Oregon Coast. They spent two weeks by the beach tracking his sophomore record, 'Natural Changes' (2015).

Boone and his band, the Ocean Ghosts, have honed their performing skills at festivals such as SXSW, Treefort Music Festival, Pickathon, and CMJ. They'll be on tour this March, including a stop in Austin for SXSW. Live dates on Beehive Candy tour page. Facebook here.

As lo-fi music goes, there is no shortage of atmosphere and content in the song 'Mystic Winds (from the East)'. The vocals are one of the key attractions, as is the gentle melody in this imaginative piece. 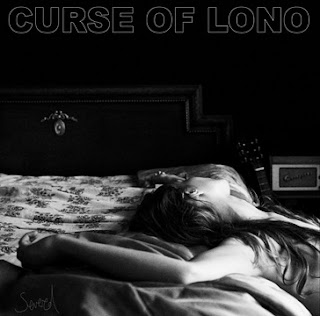 Curse Of Lono - Pick Up The Pieces.

Founded and fronted by Felix Bechtolsheimer, formerly the singer-guitarist in British roots pioneers Hey Negrita, Curse Of Lono formed in early 2015, though the songs on ‘Severed’ were written over a 14-year period.

They range from the perky, Paul Simon-ish new single ‘Pick Up The Pieces’ to the more lugubrious ‘He Takes My Place’, the almost jazzy ‘London Rain’ and the rootsy, rhythmic ‘Send For The Whiskey’. The album belongs as much to the Americana tradition and old faithfuls such as Little Feat as it does to more modern, playful practitioners of the form such as Beck. Website here, Facebook here.

It was last summer when we came across Curse Of Lono and the new track 'Pick Up The Pieces' immediately grabbed my attention with the lively riffs and overall vibe. Album eagerly awaited. 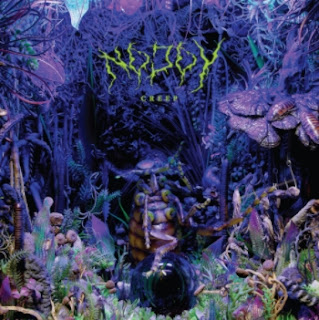 Background - No Joy recently announced the Creep EP, which will be released on Feb. 24 on the brand new label collective Grey Market, and this week shared the second single from it, "Hellhole".

For most listeners, No Joy are a standout from the shoegaze revival, that wall of noise lead by its two female band members Jasamine White-Gluz and Laura Lloyd and their long headbanging blonde locks. In a 2011 Blackbook piece on the band’s detached yet visceral live show, the writer coyly commented “they are playing with their backs to the audience…shy girls.”

As the principal writer of their past catalog, White-Gluz steers the material on Creep in new directions, drawing on varied influences ranging from Industrial to New Age. With co-writer and producer Jorge Elbrecht, the pair create a soundscape that is both familiar and fresh. Tracked in Montreal at Hotel 2 Tango and in White-Gluz’s Little Italy apartment, the sound is huge. Dynamic juxtapositions of dark and light, feminine and virile are cemented together with their signature earworm hooks. No Joy are challenging themselves by distancing from the traditional rock band formula, creating a new live show to accompany the release. Live dates on our Tour page, Facebook here.

We featured the first single a little while back and the new song 'Hellhole' is of equal stature, and one that makes the forthcoming EP even more enticing. Plenty of atmosphere and energy works so well against dreamier vocals. 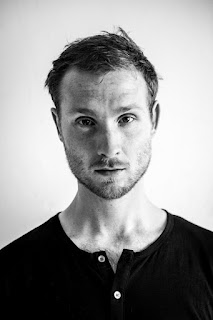 Altar Eagles - What Are You Coming To?

Background - Quote: "'What Are You Coming To?' is a song about hindsight. Basically about looking back on a relationship and trying to own up to your own mistakes while realizing you don’t even recognize the person that you thought you knew so well. Kinda like that line about listening when people tell you who they are, but in this case you didn’t. All past tense."

Bio:Erik Alcock has been a professional songwriter since he was 17 years old.  He talked his way into a live audition with EMI Canada in his native Toronto and then proceeded to cut himself on his guitar, bleed all over the auditioning executive’s office, and play terribly. He was signed on the spot.

After getting signed Erik left home and school and spent the next two years living in a jam space.  While the experience was not all that conducive to his songwriting, Erik was able to develop his chops by playing constantly.

His quality of life improved substantially when he joined a band and spent the next few years on tour. When the band broke up he started working with DJ Khalil, Chin Injeti and Liz Rodrigues, forming The New Royales. Since then they've written songs for  Eminem, Kanye West, Pink and a host of others, which led to several Grammy wins, having the theme for  Mission Impossible 4, the Call of Duty video game, and Jake Gyllenhall’s movie “Southpaw.” Facebook here.

It's the sort of song that John Lennon could have written, asking deeper and searching questions. 'What Are You Coming To?' is however very much Alter Eagles work, and it's a pleasing and superbly delivered song and a fine showcase for his song writing skills. 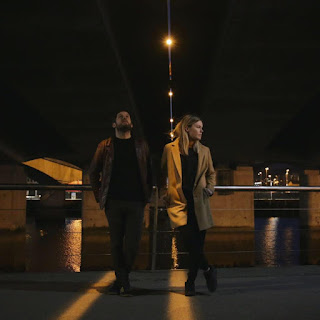 Background - Belfast duo, Hiva Oa are pleased to share their brilliant new single 'So Many Lies'. The track is taken from their forthcoming EP, mk2 (part 2) - out April 7th.

'So Many Lies' stays central to the ideals and themes presented within previous EP 'mk2 (part 1); however, it takes to the fore principles of accountability where there has been a catastrophic loss of control. It's about a personal frustration against the misuse of power in all its forms; be it introspective or a wider shared communal disapproval.

‘We have suffered all this while, for your lies.’ The track also harnesses a counterbalance, where one can look at their own guilt by association or inaction in a situation. ‘You stole it all in front of our eyes, wasted enough to gather it all for your lies.’ Hiva Oa are: Stephen Houlihan & Christine Tubridy with Matthew Collings and Daithi McNabb. Facebook here.

Our third feature for Hiva Oa who consistently deliver really good alt rock music. 'So Many Lies' is notable for the emotive almost pleading vocals. The soundtrack gradually builds into a formidable and expansive piece that adds even more potency to this really fine song.