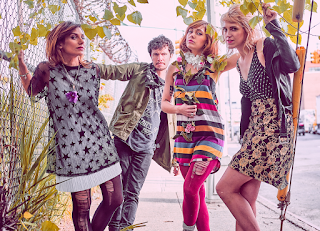 Fruit & Flowers – Out Of Touch.

Background - Brooklyn-based "surf noir" garage psych band Fruit & Flowers announce their debut EP, Drug Tax, due out June 30th via Little Dickman Records. Fruit & Flowers are one of the most active bands in the NYC area, and have been deemed one of "NYC's Hardest Working Bands" by Oh My Rockness. The band embarks on its third tour of 2017 in July to Canada and the Midwest in support of Drug Tax. Fruit & Flowers' exuberant, electric performances draw a local following. Ana Becker's angular, expressive guitar style and Lyzi Wakefield's gritty rhythmic backbone merge a post-punk heaviness with psychedelic warmth. Committed and charismatic front woman Caroline Yoder summons a fervent energy, surrounded by distinct, warm and refreshing three part harmonies, the bedrock of Fruit and Flowers' sound.

Conceived in a Bushwick loft with broken AC during the summer of 2015 by Caroline on bass and Shaw Walters on drums, the band was soon joined by Lyzi Wakefield and Ana Becker on guitars and vocals. The band agreed to play its first show at Northside festival just weeks after formation and wrote the record in a furious fit of hot nights and inspired mornings. The band became fully realized when Shaw handed the role of drummer to Jose Berrio (drummer-cum-art director), whose inimitable style elevates the strong rhythmic character of the band.

Drug Tax was born out of necessity, capturing the grit and rush of New York City summer and the newfound chemistry between the bandmates. Weaving together the perspectives and expressions of the band's multiple songwriters, Drug Tax unfolds to present the unique and varied voice of Fruit & Flowers. Lead single "Out Of Touch" is about the ennui of a missed love opportunity, with soaring, sultry vocals, beachy surf rock riffs and fuzzy bass. Album tracks range from the sultry moody and beautiful "Dark Surf" to the post-gothic title track "Drug Tax."

Drug Tax was recorded at Thump Studios in Greenpoint, Brooklyn. The EP was engineered and co-produced by John Thayer, and mixed and mastered by George Harris. Jose Berrio designed the band's logo and album art. Website here, Facebook here.

'Out Of Touch' is described spot on in the above promo, with it's sultry vocals, beachy surf rock riffs and fuzzy bass. All I would add is that the song is pretty persuasive in demanding a second play. 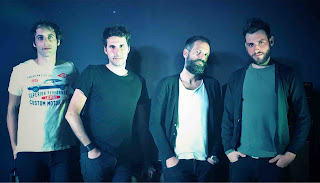 Background - Clustersun has just released the psychedelic shoegaze offerings of their sophomore album ‘Surfacing To Breathe’, via Seahorse Recording. Three years after their debut album ‘Out Of Your Ego’, this 4-piece outfit from Catania (Siciliy) have raised the sonic bar, delivering a more complex and layered mixture of gazey reverberations, a massive walls of sound, psychedelic soundscapes and dreamy melodies.

“The sophomore album is a very tough step for every band, especially if it comes after a strong debut, as our ‘Out of Your Ego’ was,” says Marco Chisari. “We are so much happy and proud of how ‘Surfacing to Breathe’ came out, mainly because we’ve managed to capture how the band sounds live.” Facebook here, Bandcamp here.

'Raw Nerve' is but a glimpse of the power contained within the multi layered psychedelic shoegaze album that is 'Surfacing To Breathe'. Despite the initial impression of an all out aural assault, the detail and craftsmanship becomes quite apparent as does the dreamier elements contained within. 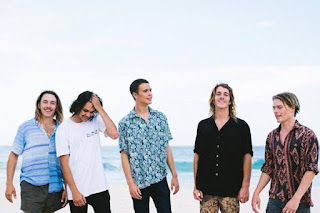 Background - Vanilla Gorilla announce the release of their new single ‘Rainbow Girl’, out Friday 19th May 2017.  Vanilla Gorilla consists of 5 young dudes from the Mid North Coast of NSW, they all share a passion for the earth, creating art and music that they share ever so well with audiences all over.

Drawing from influences of their surroundings they create their own salt water infused rock and roll, with every individual adding their own touch to create Vanilla Gorilla.

Vanilla Gorilla started off playing in garages and school grounds in 2012, since then they have toured up and down the East Coast, with their own headline tours and festival slots. With E.P ‘Colour Flow’ under their belt and newest single ‘Rainbow Girl’ due for release this week, the future is looking swell as can be for the boys.

Speaking on the recording process of ‘Rainbow Girl’ the band commented; “We began by playing the song live, where bass, drums and rhythm guitar were recorded. Then Dylan mixed it and added lead guitar and vocals over the top and added effects when needed.” They added “It probably took 2 months all up to complete because we don't see each other very often - some of us have moved away for University” Instagram here.

The creativity is apparent right from the opening notes on 'Rainbow Girl'. The music and vocals drift around each other as the atmosphere and power unfolds. Forget the radio edit version, this deserves the full six minutes on any discerning station. 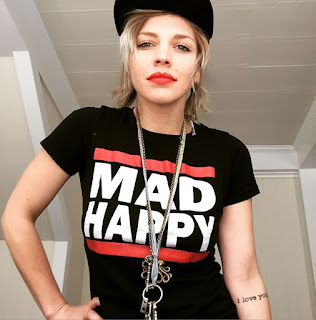 Background - LA based vocalist and lyricist B. Squid announces the release of her music "Radio Silence", the # 1 track from her November 2016 album Cloud 9. "Radio Silence" takes you into B. Squid's world, and most of the video takes place in the recording studio. B. Squid fuses together elements of lyrical flow, jazz, and indie to create her own new, creative and forward-thinking new independent genre. The music showcases B. Squid's larger than life persona. She definitely seems to sparkle and shine.  The music video for "Radio Silence" was featured on an independent pilot about a bulimic girl called "Binge the Series. It is the opening track for the pilot and has received more than 400,000 plays.

Ohio born, Squid was raised in Ypsilanti, MI, Cleveland, OH and Miami, FL.  Upon graduation from film school at the University of Miami, she pursued film production work in New England and NYC before relocating to her current home in Los Angeles where she resides and works for acclaimed production companies and film/TV directors.

After debuting her first recording alongside a no-budget, self-made video on YouTube, Squid was invited to screen the video at an event but refused, positing that a 30-minute hip hop set would have a far greater impact.  Two months and five new songs later, B. Squid performed her first-ever live show to a full house at O'Brien's Irish Pub in Santa Monica.  Squid was immediately invited to return the following month marking the start of her first residency.

Six months later, camera in hand, Squid introduced herself to a legendary and actively prolific lyricist named Abstract Rude.  She entered his famed SBRC (sixteen bar rap competition), proved her chops and their partnership was born.  Within two months, a bevy of nationwide Keep The Feel tours began featuring Squid as an opening act and her sound has been evolving on stages before live audiences ever since.  True to her film side, Alyson "B. Squid" Bruno has now directed over twenty music videos and photographed more than six tours and dozens of stages for Abstract Rude as well as many other KTF and Rhymesayers artists.

In 2015, Squid paired up with local New Orleans composer Ratty Scurvics to record her debut LP Cloud 9 which dropped in November, 2016 on Keep The Feel Ent. Website here, Facebook here.

Funky and feisty 'Radio Silence' mixes melodic rap vocals with a genre straddling arrangement, that is both vibrant and catchy.