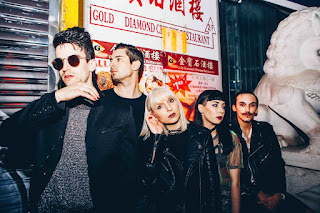 Background - ‘Mexico’ is the new single from the forthcoming ‘Keep Crawling’ EP. Sc Mira formed in 2013 when singer-songwriter Sadye Cage met lead guitarist Ty Vega and the duo began playing acoustic gigs in their home town of Winnipeg, Canada. However, coffee shops and open mic nights barely scratched their creative itch, and it wasn’t long before they found themselves enlisting additional musicians to play live and in the studio with them; and so their 2015 debut, 'Waiting Room Baby', was born.

Produced by Vega and mixed by Montréal legend Howard Bilerman (Arcade Fire, Basia Bulat), the critically auded six-song album found its way onto several best of year-end lists in Canada and was a record that,  according to Noisey, “will give you the bad feels in a good way.”

Now, two years after Sc Mira discovered their darkness, the band is back with a new collection of songs, beginning with the aptly titled 'Keep Crawling' EP, from which ‘Mexico’ is the first official single. Bright on the outside but ice cold within, the self-produced record is guided by an unlikely partner in mix engineer Ferro Montanino, a pop producer and composer with a knack for film work and a collaboration with EDM star Skrillex under his belt. Ferro’s knowledge of the electronic and pop world complements Sc Mira’s synth-driven indie rock sound, resulting in a fusion that places it in the modern day Death Pop lineage. Website here, Facebook here.

A deep bass and delicate synths are no match for the beautifully defined vocals as 'Mexico' begins to unfold. The music gradually builds in layers of refined sounds, adding more texture and charm to this fabulous song. 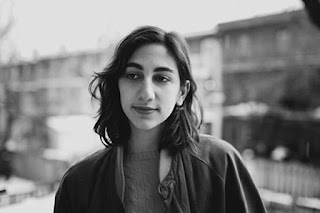 Common Holly - If After All.

Background - Solitaire Recordings is extremely proud to announce the release of Common Holly’s incredible first single 'If After All' from the forthcoming album entitled Playing House. Born in New York and raised in Montreal, Common Holly (AKA Brigitte Naggar) puts unpredictable compositional elements into a singer-songwriter/folk framework, packaged in textured, eclectic electro-acoustic production. Her forthcoming album, Playing House, contemplates the notion that it is conscious thought and deliberate action that defines and cements maturation from child to adult.

‘If After All’ demonstrates Common Holly’s astonishing ability to structure and compose highly intelligent yet incredibly emotive songs. Beyond the compositional intricacy of each section, the real beauty and genius of the song can be found in how Naggar uses the meaning of the lyrics to mirror the structure of the music. Naggar sings about her difficulty moving forward from broken relationships, of attempting not to slip back into old vices but feeling hopelessly trapped in a cycle of failed recollection. She expresses a strong need to move forward, to progress and grow, a sentiment which is unmistakably mirrored in the way the music evolves within the track.

‘If After All’ consists of three distinct sections: First, a collage of playful and mechanic percussion fills, swirling guitar harmony and deliberate vocals. Each instrument is ostensibly independent of each other; yet, collectively, each part fits together to create an intentional musical illustration. The second section mellows into somewhat of a tempered Angel Olsen singing over a Godspeed You! Black Emperor string arrangement that slowly but brutally climbs towards its peak. It finds its climax in the third section, a Mitski (see: Your Best American Girl) or Radiohead (see: Paranoid Android) almost math rock finish.

At no other moment in the song does the parallel of lyric and structure become more evident than in the final seconds of the track. Despite the erratic sounds around her, Naggar remains calm, attempting to move forward but ultimately relapsing: “I will always forget, any way you spin it”. Website here, Facebook here.

'If After All' came our way by virtue of featuring another artist albeit from a very different genre, the sender making a calculated guess this might also appeal and it does! Perhaps it's because the track has a number of unique attributes, it does not sit in any specific genre and morphs through differing stages. Whatever, I like it a lot as I hope will you. 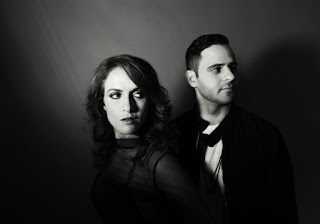 Background - New York City-based, indie pop/rock duo Satellite Mode share their debut EP, Wild Excuses, on all DSPs. Satellite Mode is the project of the classically trained duo  of vocalist, Jess Carvo and producer and instrumentalist Alex Marko. Facing the threat of never being able to sing again, Carvo found her voice after an emergency vocal surgery and delved into writing as a creative outlet. Soon meeting Marko, who had just gone through a breakup, the duo transformed hardship and strife into power and success, using their musical chemistry and formal training as a vehicle for expressive and creation.

The band independently released single, "Wild Excuses,"  via Noisey, landing a spot on Spotify's coveted Weekly Buzz playlist, gaining over one million streams on Spotify to date. The track holds the namesake and is the opening track for their forthcoming 6- track EP. Satellite Mode has supported a variety of live acts including Great Good Fine Ok, The Night Game and Flor. The duo shared their lead single, "Bad Woman," via BlackBook, who describe the track as "a statement of defiant self-possession set against a potent musical backdrop of contemporary rock & roll cabaret – with its fuzzed out synths and ominous strut of a groove."

The 'Wild Excuses EP' has already received plenty of listens via Soundcloud excepting 'Bad Woman' & 'Wicked Game'. Now that might not be the case on other digital platforms, however unless you want to volunteer to be an unpaid researcher & check all of that out, I'm happy to let that be my excuse for an additional feature on Beehive Candy.