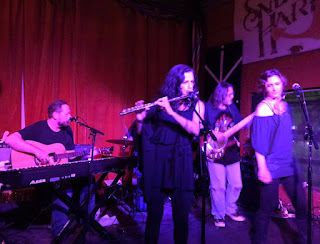 Jason Herring & The Mystery Plan released their new album 'Queensland Ballroom' on September 8 via Ten Millimeter Omega Recordings. With an infectious chilled atmosphere and dreamy female vocals, ‘Electric Love’ is the first single from this release. The accompanying video was directed by Jon Ecklund and Fiona Jones and produced by Dream Out Loud Media.

Based out of Charlotte, North Carolina, the band is comprised of Jason Herring, Otis Hughes, Jeff Chester, Amy Herring, Paul Jensen and Patty McLaughlin. This 11-track offering follows the band’s 'Electric Love' EP, released in June of this year.

Both of these releases involved production by legendary producer John Fryer, one of the most innovative sonic architects of our age. “John Fryer has practically soundtracked your entire life,” says Impose Magazine, with a musical imprint that is massive, having shaped the sound of nearly all early 4AD Records' releases (Cocteau Twins, Lush, Kristin Hersh, Dead Can Dance), as well as bands from Nine Inch Nails and Love and Rockets to HIM and Depeche Mode. He is also one of just two artists behind This Mortal Coil, along with Ivo Watts-Russell, and the mastermind behind his latest project Black Needle Noise.

Jason Herring met Fryer while visiting Los Angeles, where his studio is currently based. After collaborating on the 'Electric Love' EP, they launched into the new 'Queensland Ballroom' LP, which sees the band take a turn from their trademark psychedelic folk sound to a more electronic downtempo groove.

After a hiatus of several years, bandmates Jason Herring (The Interstellars, Muchacho, Farfalla) and Paul Jensen (Fetchin' Bones, the Interstellars) began writing songs again.  Soon thereafter, the first album 'The Future Ain't What It Used to Be' was released in 2010, followed by 'Chateau Beaumont' in 2012 and 'Long Shadows' in 2014. Facebook here.

The first of eleven tracks on the 'Queensland Ballroom' album is 'Electric Love'. It typifies the rich synths and and dreamy vocals that are full of fine textures and atmosphere. The collection includes three remixes, including one for the featured song. Overall this is an imaginative collection of material, if you like Electric Love, the album really is a must hear. 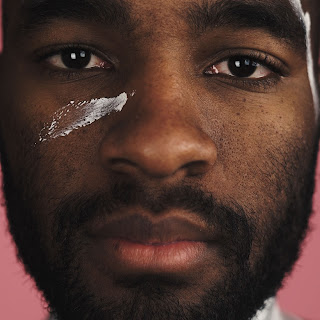 Background - Without a doubt, Buffalo's music scene is buzzing about multi-instrumentalist, M.A.G.S. (aka Elliott Douglas). Signed to Admirable Traits Records, M.A.G.S. popularity has been shot out of a cannon since the release of his debut EP Cellophane in 2015 notably due to prominent features in the TV shows Shameless, The Flash, and Famous In Love. M.A.G.S. can best be described to new listeners as Cloud Nothings Attack on Memory re-worked by Lightspeed Champion era Dev Hynes.

The second single from the album, "Mexico," which dropped 9/8/17, is all about figuring out what kind of person you want to be and learning the hard way about how your decision-making will affect you long term. In a nut shell, it's about the perils of growing up and becoming an adult.

All of the instruments are written and mixed by Douglas and recorded by Dave Drago at 1809 Studios in Rochester, NY. The album is out right now via digital, tape, and cassette, which is available for order on M.A.G.S.' bandcamp here, Facebook here.

'Mexico' is an energised, uptempo indie rocker, where the vocals are a driving force for the song, and that's saying something when you consider the potent full on sound the band create. 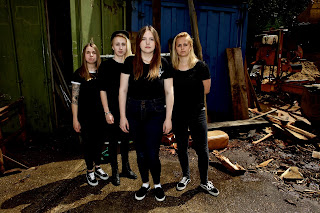 Background - Young States are pleased to announce their new single 'Memory', taken from the forthcoming EP, 'Past Truths | Present Lies' - out 29th September. Hailing from Norwich, Young States are a four-piece band specialising in energetic and passionate punk rock.

Formed at the end of 2014, the band met at a music school in Norwich. Guitar and vocalist, Libby was on a sound engineering course, the others on music performance courses. Guitarist, Amy got Young States together as she was bored of seeing male band after male band, and wanted to form an all-female group. She approached the others in the corridors of college after seeing them carrying their instruments.

With a love of Brand New, Kids In Glass Houses, Defeater and Mallory Knox, Young States quickly wrote and recorded their debut EP 'Down to You' which saw them receive play from Scuzz TV, BBC Introducing and features in the pages of Kerrang!

New EP “Past Truths | Present Lies” is about personal growth and letting go of the things that have previously caused you pain. Lead singer and bass player Georgia says: “All the tracks on the EP have different meanings to some extent but the common thread between them all is that they're all about my own (not-entirely-happy) feelings I've experienced in the past. The idea for the EP name comes from saying that I experience these exact feelings at the moment wouldn't be true.” Facebook here.

Young States are described as a passionate punk rock band. 'Memory' oozes passion, however for me it's more of a feisty alt rocker, however there is no point quibbling over genres, the main thing is this is one natural and catchy rocker, & that's more than enough. Background - Azraq Sàhara formed in Athens, Greece, in 2013 as the personal project of singer and songwriter Sara D. Satàn. Her first home recordings and early live performances were a lo-fi amalgam of beach pop and surf melodies.

Following a year of writing and experimenting with fellow artists in the Athenian psych scene, the band emerged in 2015 with their 11-track debut album, 'Radamenes', via Athens based TBMR Records.

The album is a continuation of the band's early sound, but dives deeper into their Mediterranean origins, to take you on a journey from the Sahara Desert to the Californian coast.

When asked to describe their own music they call it ‘Desert Goth’, “it's surf guitars and jungle drums mixed with Mediterranean influences, from folk and Eastern melodies to sea sounds and desert winds.”

Now based in Manchester, UK, Azraq Sàhara are bringing their self-styled "Desert Goth" to British audiences and plan to release a new EP in 2017.

Now desert goth is a new description for me, however it really does capture the overall feel of 'Bones'. Strong hints of psych rock are there in the under current & the video adds something of a hippy feel to the track. Pretty good going for just one song. 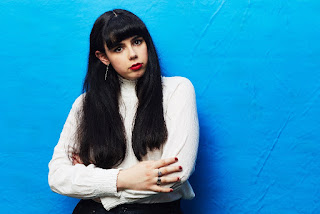 Georgia June wrote "Cool" after soberly leaving a party where everyone was under the influence of some form of substance. Observing the facade created by the ridiculously pompous private school boys, Georgia wrote the song as a satire on  her turbulent teenage years. The track asserts that popularity and hipness are contrived labels created by high schoolers, and through her artistic expression, Georgia has been able to move beyond the narrow mindedness of her peers. The song was inspired by Joan Jett, who soundtracked her car ride home from the party, displaying a more aggressive side of Georgia June. The video was directed, produced and edited by James Adams (Delta Riggs, Julia Jacklin). The campy visuals in the video compliment Georgia's kitschy, but still fashion forward style. Her identity, being an artist, scholar and creative, is contrasted from the stuck up, basic private school kids in Sydney that she was forced to grow up with. She also sticks out as a strong front woman, singing in front of her homogenous, male bandmates.

The song is the first of three tracks that were recorded during Georgia June's visit to New York City at Diamond City Studio. The collection of tracks represent a time of reflection for Georgia, as each track represents an aspect of growing up and schooling. Second single, "Broke," is about being a struggling musician in the city, completely isolated from support networks and being halfway across the world (literally) from friends and family. Third single, "Pressure," is about the expectations from family and superiors to go to university and take a traditional route, having grown up as a self-proclaimed nerd. The collection of tracks tells an endearing story of a girl, growing up as an outsider, and then finding her place in a big city. Through these tracks, Georgia June is finally able to display her cheekiness, quick wit and mature perspective on difficult teen years. Website here, Facebook here.

With a feisty riff and some determined and emotive vocals 'Cool' builds into one very cool (sorry) rocker. Natural and personal, it's a no nonsense song that feels like it comes straight from the heart.