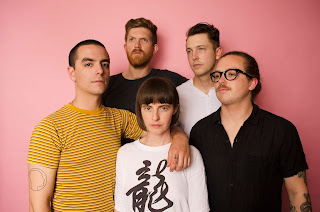 Wild Ones - Standing in the Back at Your Show.

Background - Portland, OR's Wild Ones are sharing the second single off their forthcoming album, Mirror Touch, due October 6th via Topshelf Records. "Standing in the Back at Your Show is about young love when it's completely inappropriate and unwieldy.," explains vocalist Danielle Sullivan. "It began as a story about my husband and I, who is also a musician, and morphed into a semi fictional tale of its own."

Mirror Touch, the band’s latest record releasing in October 2017 via Topshelf Records, explores spaces of isolation, loneliness and how it feels when the line between self and other becomes blurred. The record title refers to the condition "Mirror Touch Synesthesia" and the physiological experience of empathy. How can you know yourself, when in public you become everyone else?

The songs explore the quest to maintain artistic self-integrity in an industry that seeks to homogenize. Solitary in their process of collaboration, Himes and Vicario produce the music, while Sullivan crafts lyrics and melodies, their attempt at self-preservation against the ever-changing expectations of what music should or should not be. Combining their style of upbeat melodies with a backdrop of darker lyrical themes, an inquiry into their artistic process ultimately reflects a balance between earnest head nods to their favorite sounds with a fierce loyalty to their own sense of self. Website here, Facebook here.

Our second feature for Wild Ones following on from the first single 'Paresthesia' this time we have 'Standing in the Back at Your Show'. This is a slower paced song, however the melody is once again notable alongside the beautiful vocals and finely arranged music. 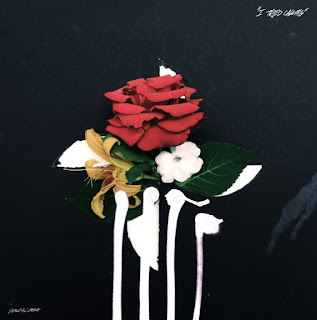 Background - Just like the cyclical themes and dreamy harmonies found in many of their songs, Space4Lease have come back around with another stellar single, “I Tried Calling” which was released last Friday.

Intensely personal, the track provides a close scrutiny of the patterned, often repetitive and all-consuming nature of love and relationships. “I Tried Calling” comes as the fifth single from the band, all being released on a new EP Drifting out September 22, 2017; additionally Space4Lease just announced a U.S. tour this fall in support (dates below).

Singer Grayson Hamm provides his insight on the new single, “[I Tried Calling] tells you a story of love and a continuous cycle of emotion – the ups and downs of maintaining a relationship, sometimes even after it’s over. This song is probably the most personal track of the five we have released this summer and I believe it puts an exclamation point on the entire project as a whole.”

He shares that the song was originally written on guitar and came together in the course of a day. “The emotions were there, but it was just a matter of expressing them in the proper way with the right style lyrically. Brandon, Walt and I were up late one night wielding acoustics while sitting on our back porch when I played them the song for the first time. As they played along to me, the song resonated so well with us in a meaningful and emotional sense that it just all came together. We didn’t overthink or spend a lot of time working this song out – the way we played it that first night was the format it kept.”

“I Tried Calling” and other recent singles can be found on the band’s Bandcamp (here) and all major digital platforms now. They will be formally released as a cohesive EP Drifting on September 22, 2017. Website here, Facebook here.

The vocals standout from the start on 'I Tried Calling' a slowly developing alt rocker, where the musicianship and production are of high quality. The subtle melody and constant flow of hooks makes this track stand out. 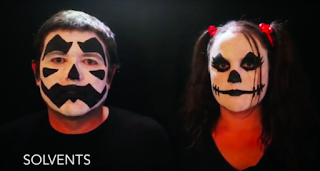 Background - A message from Jarrrod Bramson, on behalf of the band: "I was on tour in Salt Lake City Utah about ten years ago. I was walking alone. It was hot and I was hungover. From around a corner, these two clowns appeared and were walking towards me.

I was literally in shock. They were ten times as shocking than any punks I'd ever seen. They walked past me and paid me no mind. I couldn't get them out of my head. What were those kids?

Around this time my roommate and I started obsessing and sending each other videos of the gathering and all sorts of Juggalo stuff. We were hell bent on figuring out all we could about this fascinating and misunderstood subculture.

In 2015, I tried to write a song called "Teenage Juggalo." I couldn't make it fit right and after awhile, "Lips Like a Juggalo" just kinda popped out of my mouth. Also: Keep yr eyes/ears open for our next record, Memory Shreds, due out someday.

The background to 'Lips Like a Juggalo' is intriguing enough. Thankfully the vibrant indie rock song does justice to the story & the video adds some additional interpretation. 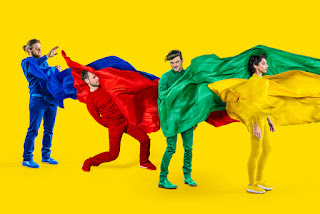 Background - Intergalactic Lovers returned with their third album ‘Exhale’ last Friday. ‘Exhale’ is a collection of sky-wide alt-rock songs with melodic pull that echoes the best of PJ Harvey or Cat Power. Elemental singer/songwriter Lara Chedraoui is the emotional center of the band. Hailing from Belgium, they are one of the biggest bands in that country having achieved Gold Status and being awarded ‘Best Breakthrough Band’ at their Music Industry Awards. Now signed to a strong independent they are taking their music international with success at home that equates to someone like Wolf Alice or Honey Blood in the UK. Their new record was produced by the world renowned Gill Norton, the legendary studio man behind amazing albums for The Pixies and Echo & The Bunnymen.

Their forthcoming album ‘Exhale’ is a response to watching their nearest and dearest burn out in many ways. Even the name expresses their exasperation of a time when the chaos of life caused pain to those the love. Lead singer Lara Chedraoui explains the frustration of not knowing how to help.

“This album is an angry reaction to the constant battle of how conformity can ruin peoples state of mind. Perfection is not everything. Exhale is about not knowing how to save everyone; loved ones and those effected by all the horrible things happening in the world.”

The fragility of the album echoes over thunderous guitar riffs keeping the classic band set up together for a modern take on epic rock and roll. Chedraoui’s voice delves from delicate to seductive through out the album. Leading with single ‘Between The Lines’ other strong single contenders include ‘Ego Wars’ a rousing depiction of a faltering relationship and ‘Fears’ an anthem that sounds tailor made for arenas. First album ‘Greetings and Salutations’ received critical acclaim across Europe leading to a signing at Warner Music and to their second album release “Little Heavy Burdens”. Website here, Facebook here.

The music video carries a story with a twist and the song 'River' needed to be strong and catchy to remain relevant. In fact it's a fabulous track that might be described as melodic alt rock that truly resonates. 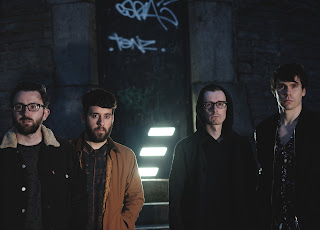 Embers - Until The Dawn (Live).

Background - Manchester ‘Neu Cinematic’ four-piece Embers have announced the release of new single Until The Dawn through AWAL. The band have also announced two live dates at London’s Tooting Tram & Social on 3rd November and a hometown show in Manchester on 4th November at Soup Kitchen.

Inspired by the cinematic, including composer John Murphy and artists such as Radiohead, Run The Jewels and Sigur Ros, Embers merge their influences together to create a sound filled with grandeur and urgency.

Following previous singles The Bitten Tongue and the double A-side release of Signs/Unbound earlier this year, Until The Dawn perfectly evokes Embers striking and unique sound. Potent and moving, the track builds in intensity both vocally and musically throughout to a powerful chorus.

The live video, which is the first part of two live performances filmed at Manchester’s spectacular Albert Hall, gives an insight into the scale of the band’s sound and how captivating their live performance really is. Embers say; “We knew with this release we had to do something that could show the scale of songs we were putting together. We wanted to create something immersive, bold and ambitious - something that captured who we are, the live band behind it all.” “Until the Dawn is that feeling of leaving nothing behind. The darkest hour, the silver lining."

Well regulars might know my passion for live music. Despite the lack of an audience 'Until The Dawn' has everything a monumental performance needs. The song is both memorable and carries an extra level of energy that only live music can provide. 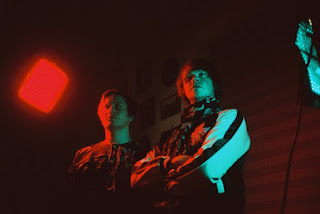 The duo's forthcoming debut album ‘Planet Language’ was entirely self-produced, with recording alternating between Marius’ home studio and Oslo’s Metronomicon and Stable Studios. Its analogue approach and vintage mantra is seemingly at odds with the more interstellar nature of tracks like newly released single ‘H.I.T.S.’ – which according to Tord is, “the most futuristic sounding song sonically” on the album.

An acronym for Head In The Sand - Tord explained a little about the new single: "‘H.I.T.S.’ is probably the most straight-up track on the album. It’s not at all metaphorical as a concept, it’s about avoiding confrontation and just burying your head in the sand."

Marius and Tord have been playing and writing music together since childhood, recording their first demos to cassette circa ’96. The pair grew up in small Norwegian town Elverum before embarking respective international careers, with their latest planetary pursuit landing in Tokyo – the cultural heartland of forthcoming album Planet Language. Facebook here.

Synthy and flowing 'H.I.T.S.' takes indie pop into more expansive territories and does so with style and plenty of energy. 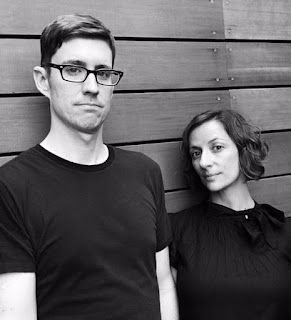 The group, consisting of Rima Ash on violin and Yates Brown on guitar, has performed alongside indie, folk, post-rock, metal & noise bands as often as chamber, jazz, and world artists, in settings ranging from punk clubs to classical house concerts.

Their 2013 debut album became the #1 acoustic album on Bandcamp, and a subsequent EP and video of reinterpretations of classical metal went viral on Youtube in 2015.

I have said it before & here goes again, there are just not enough instrumental only singles released. 'Vespertina' is a fine display of musical dexterity, where the instruments can and do deliver passion, feeling and emotion.