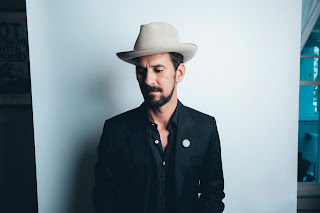 Background - Gill Landry has unveiled a brand new video for ‘Denver Girls’, the second single taken from his latest solo album ‘Love Rides A Dark Horse’. Since making my last record, I destroyed all the pillars of my life intentionally and by accident. I found myself wondering what the hell I was doing, and had to slowly start rebuilding. When you go back to the ground level in any field, with your toes in the dirt, you've got to really want to do it. I already came up through the clubs, playing all the small gigs, busking the streets, and also got the delusions of grandeur that come from playing in much bigger places. When you've been through it and you know how much work it is to start from the bottom, you have to ask yourself if it's truly what you want. Here we are, so I guess the answer is yes.

A little over two short years ago, I was set to be married to a woman I loved very much, had just won my second Grammy with Old Crow Medicine Show, and life was good by all perceivable standards. However, I was deeply unsatisfied artistically and needed to leave the band. After the first year of touring my last album, I swore to myself I wasn’t writing another goddamned broken-hearted love song, but then my lover took flight and I found myself alone, worn out, disillusioned, and heartbroken in a way I hadn’t known before. The future was looking like an exhaustingly long walk through a knee-deep tunnel of shit ending in death, so, it seemed like it wasn’t going to be an overly joyous next record after all. BUT, I wanted to find a light in the darkness. This album is more of ‘a map out of the darkness’ than ‘an invitation to it.’

In writing this album, I wanted to paint a vision of the prison of expectations that eat loving relationships at their core and can turn them into a mechanical farce. The premise through most of this album can be summed up by the title “Scripted Love”. The songs reveal characters trapped in scenes they didn’t create as much as rehearsed. Their roles are played through narratives either engrained or sold to them through: Hollywood, social norms, family, fairy tales, etc. Hung up on “what’s supposed to happen” over what’s happening. They find themselves disappointed with the reality of relationships due to their false idealisations. Love becomes a possession rather than a presence. This isn’t to say I don’t think that there aren’t millions of people living in harmonious, real, and loving relationships. I don’t happen to know an overwhelming amount of them, but I know they exist.

'Denver Girls' is the second track we have the pleasure of sharing from the 'Love Rides A Dark Horse’ album. In the previous feature we commented "high class Americana - vocals and harmonies are heartfelt, whilst the music is understated and pristine". 'Denver Girls' is if anything, even more beautiful and the accompanying video is just right for the track.

Background - Glances share the second track "Later Days" from their album 'I feel very close to you right now' which was released a couple of days ago.

There’s more to a story. Glances is a recording project out of Chicago, Il. In 2012 Micah Waldron moved into an artist loft in Chicago’s Pilsen neighborhood where he met Ashley Thompson, cute. About a year later Ashhh spent some time on a farm in Hawaii where she met Christian Whiting (Chin). Through her persuasive nature she convinced Chin to move to Chicago where the three of them started playing music together. Eventually an album started to form. It was an accident.

I feel very close to you right now is a collection of songs that strive to portray the the hidden meaningfulness of impermanence by examining it through the context of a relationship. Before we weren’t close, now we are, soon we will not be. It’s meant to be listened to, preferably together. WEBSITE, FACEBOOK.

Four weeks on & 'Later Days' is our second song share from Glances. This is a group who seem to follow their creative hearts when it comes to writing & delivering music. As mentioned last time around, the album really is worth listening to as a whole, if you like either of the songs we have featured I am more than certain you will love the collection.

Background - Acclaimed Melbourne based artist Woodes has released a new single 'Dots'; an anthemic track highlighting why Woodes is one of the most exciting names in Australian indie music. The track is a driving, sonic wonderland highlighted by the incredible vocals by Woodes.

Woodes commented on the writing process. "I wrote this on my first writing week overseas. I was in and out of sessions with new writers and it was a new world to me, working with strangers in another country. This track started with the concept that we’re all connected and quite exposed in our locations through technology. GPS, geo tagging, constantly updating where we are and where we’re going as well as who we’re with. The mystery is taken out.

The song evolved into a miniature quest, searching for something. When I dream I usually remember narratives from them, for a long time they were presented in a quest format. Most of my favourite films and shows revolve around quests so it made sense to seep into my subconscious. I often feel like things appear like little clues to someone or something. It feels fortuitous when I meet certain people and find out we share common interests and values. When I listen to 'Dots' I see different terrains, different parts of the world. No matter where I am I find little sparks from human connections and landscapes. No matter where I travel to I’m still connected to home."  WEBSITE, FACEBOOK.

I remain consistently impressed by the music Woodes creates. 'Dots' is another gorgeous song, where the passionate & dreamy vocals are immersed in a powerful soundtrack. This is our fifth feature for Woodes in under two years, here's looking forward to the next opportunity.