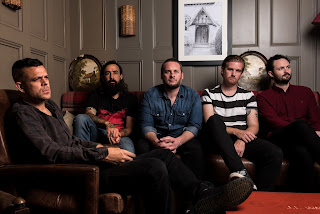 Lonely The Brave - What If You Fall In (Redux).

Background - Lonely The Brave have been deliberately quiet these last few months, working on new material and reassessing what has come before. This has been all the more noticeable because before then, they had never stopped: last year alone saw them secure a no.1 on the rock chart with their second LP “Things Will Matter”, sell-out a headline tour and play main support on a hugely successful European tour with Biffy Clyro, followed with a thematically linked series of EP’s which have shown the sheer depth of strong material that was available to them around that second record.

But despite their successes, Lonely The Brave have never been like their peers, never calculated the game in quite the same way they have, never shot from the same angle. From their stage dynamics, to their influences, to covering the likes of Bjork, Pink Floyd and Antony & The Johnsons, they have always been proud of their differences and in what has staunchly set them apart from the others who have now fallen by the wayside.

They followed the release of their critically acclaimed debut “The Day’s War” with an extended version including several Redux tracks that reinvented material rather than simply stripping it back and they follow this theme of insular reinvention again now on a full Redux album version of “Things Will Matter”. Melody and heart will always be at the centre of what they do, but Lonely The Brave are here to prove once again that they will always continue to do things that other bands can’t.

At their most anthemic, or at their most vulnerable, Lonely The Brave remain an inarguably important act. Where they head for the next album remains to be seen, but you know that if they can keep their heads we will be rewarded with another record on their own terms that will always stand proudly apart from the rest. Lonely The Brave - Things Will Matter (Redux) - Out November 10th on Hassle Records - Produced by Matty Moon and Lonely The Brave, website here, Facebook here.

We have featured Lonely The Brave once before back in March this year. The new Redux track 'What If You Fall In' is an atmospheric piece where the vocals are emotionally subdued giving a sense of simmering passion, that in fact eventually breaks through. The music is layered with gorgeous sounds, that gradually build, on what is a beautiful song. 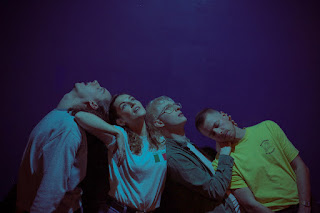 Childcare - Getting Over You (By Dressing Up Like You).

Background - Inspired by 'I should Coco' era Supergrass and Phil Spector produced Motown shakes, 'Getting Over You (By Dressing Up Like You)' is Childcare's most likely-to-be-featured-on-a-Spo tify-playlist song to date, depicting an unorthodox approach to moving on from a relationship break up.

Singer Ed Cares eloquently explains: “After being the victim of a polite yet painful breakup, I found myself later that same day wearing one of the skirts of my former inamorata for a video shoot the band was filming. Realising this was an A* creative writing idea for a song, I quickly noted down the title 'Getting Over You (By Dressing Up Like You)' in my gmail drafts folder and the song flowered from there.”

Childcare finished 2016 playing huge shows in front of thousands as part of Bastille’s nationwide arena tour. ‘Made Simple’, their debut EP released in April this year represented an emphatic statement which cemented the adoration of all those newly turned on to the London quartet courtesy of that tour. With a sling of festivals and a recent Radio 1 Maida Vale session tucked safely under their belts this four piece are soon to embark on their first UK headline tour.

It all started when Ed Cares, one of west London's most in-demand male nannies, was overheard humming a song he had written, by Katie, aged six, who persuaded him to form a band. Josh, eight, boldly proclaimed: "You're probably my second favourite artist after Katy Perry."  And so, after sourcing some neighbourhood musicians capable of living up to Josh’s heady billing — specifically Emma Topolski (I cold) on bass, Rich Legate (son of 'Menthos' font designer) on guitar and Glyn Daniels (Chelmsford born, Bristol bred) on drums — Ed soon had an able band to perform with under the only logical moniker in the circumstances: Childcare. Website here, Facebook here, includes tour dates.

It's the fourth time on Beehive Candy for Childcare, so I am guessing we pretty much like them! 'Getting Over You (By Dressing Up Like You)' has some intriguing lyrics and is so full of hooks it's hard to ignore. The whole arrangement is produced to a very high standard & I have a sneaking feeling they might hit half a dozen features at some point. Background - US Americana legends Blitzen Trapper have just unveiled the title track from their forthcoming new album ‘Wild & Reckless’ due out Nov 3rd. Earlier this year, the Portland, OR-based Blitzen Trapper accomplished a unique feat for a rock band who has been releasing albums and touring for the better part of two decades: a staged musical titled Wild & Reckless that ran for 28 performances at Portland Center Stage. Today, the band is announcing a new album of the same title that was born from the stage production and as a companion to their 2008 breakthrough album Furr.

The album Wild & Reckless was born from the stage production that the band spent the better part of a year producing. The half musical, half rock-opera dealt with heroin abuse, desperation, true love and western power structures. The story evoked a bygone era of Portland with this sci-fi love story, featuring a rock-and-roll score that paired unreleased songs with favorites from the band’s catalog.

Following the success of the production, the band took 7 original songs from the production and developed the theme further into the 12 songs that comprise the new album Wild & Reckless.

Frontman Eric Earley also sees the record as a companion and extention of their 2008 album Furr. "Wild and Reckless” is something like a cross-eyed stepchild to Furr, in that it chronicles the darker dystopian stories of rural and suburban west coast death-drive via a riffing psychedelic landscape. Ten years after Furr with all its talk of murder and the end of the western world, it seems there's more to tell."

We shared the track 'Rebel' less than a month ago & have no hesitation in featuring the title track from the forthcoming album 'Wild and Reckless'. We suggested that the previous song was "a fine alt rocker with more than a hint of Americana about it". This time the rock element is powered up, the melody is catchy & the vocals have something of a country vibe to them. 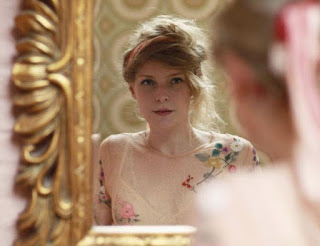 Background - Anglo-Dutch Gitta De Ridder is excited to release new single My Dear, Oh Boy, Oh Man; the first to be taken from new album For Everything A Season due out in Spring 2018; and will be hosting a single launch show at London's Green Note on Sunday 22nd October.

The songs on For Everything a Season are a journey of experiences through life and relationships, beginning with album opener My Dear, Oh Boy, Oh Man, a song about love and loss, about finding the strength to move on and let bygones be bygones.

Recorded in the beautiful suffolk countryside with friend and fellow songwriter Stephen Hodd, For Everything a Season is the next step following the success of previous release Feathers in 2016. Although themes across the album are quite universal, the lyrics also reflect a part of Gitta's personal and relational explorations across the past year.

Originally growing up in the Netherlands, Gitta taught herself to write and play songs on the guitar from a young age, and cites modern folk artists such as Iron & Wine, Ane Brun and Sufjan Stevens as her inspiration. Gitta's beautifully poetic folk-pop songs go straight to the heart. Website here, Facebook here.

Gitta De Ridder is another artist we have had the pleasure of including a few times previously and the new song 'My Dear, Oh Boy, Oh Man' is way to gorgeous to ignore. Her melodic vocals and gentle harmonies are accompanied by a simple musical arrangement that gradually builds adding additional richness to a beautiful modern folk song. Background - Despite her last name, Anna St. Louis was born and raised in Kansas City. She grew up a painter and singing in punk bands, eventually leaving her hometown to attend art school in Philadelphia. After graduating she made the move to Los Angeles where she began teaching herself guitar, writing songs and recording them on her own in her bedroom.

First Songs is the sound of someone discovering their talent in real time - a peak into the collage of a wonderful mind that is absorbing their new surroundings and using new tools to put them into the room.

Listening to this collection you can feel the sun coming in through the window - Anna on the foot of the bed with a guitar on her knee, finding her voice. St. Louis wears her influences well - think Patsy Cline singing over John Fahey - but has a style all her own.

And while you can take the artist out of the midwest, you can't take the midwest out of the artist - so let this be known; this is Midwestern music ran through a California filter. I believe Anna will have many more releases in her lifetime, but let it all begin here - First Songs. Bandcamp here.

'Fire' is my introduction to Anna St. Louis and it is a very positive one. A personal feeling runs throughout the track, with the guitar and vocal arrangement giving a live performance vibe.