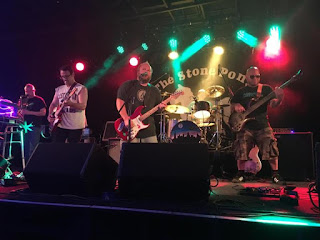 Dub Proof's music incorporates the social conscience of Bob Marley, the irresistible danceability of George Clinton funk, and the deep grooves, sweeping delays and fresh originality of 70's dub reggae, topping this basic recipe with a frosting of classic lead guitar gunslinging and a tasteful sprinkling of jazz and psychedelic electronica. Nick and Joe put the skills that earned multiple Asbury Music Awards [including Top Bass & Top Multi-Instrumentalist] to good use, while Dave, Roke and drummer Pat Clarke deliver performances that should guarantee their own AMA's soon.

The band continues to write songs that pare songs down to their essence, building arrangements that eschew long individual solos in favour of team interplay and rhythmic. The group is now in pre-production for their first self-recorded LP, while their constantly evolving sound continues to impress audiences at shows up and down the East Coast. WEBSITE, FACEBOOK.

I am always partial to some fine dub, you can blame the late great Horace Swaby (aka Augustus Pablo) for that!  'Not Enough' is a lighter dub affair with plenty of traditional reggae vibes alongside. Add in the upbeat rhythm and musical arrangement and melodic vocals & we have a very catchy groove going on here. 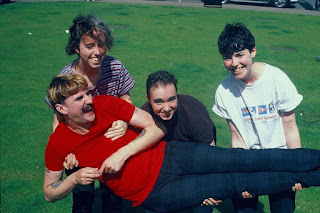 The Spook School - Less Than Perfect.

Background - The Spook School shares the second single and video from its eagerly anticipated third album Could It Be Different?, due Jan. 26, 2018 on Slumberland Records and Alcopop! in the UK. If a debut LP is an artist’s introduction to the world and their sophomore release is their now-or-never moment, their third is their most cathartic: they’ve made it out, they’re here. Glasgow, Scotland’s indiepop optimists The Spook School, despite personal and political obstacle, made it out, and their latest full-length Could It Be Different? is here. It’s been a journey of self- discovery and feel-good realism; modern, dance-friendly indiepop fueling the fun. They made a name for themselves for their exultant and empowering pop, and now, they’ve shown real growth in nuance.

The Spook School are Nye Todd (guitar/vocals), Anna Cory (bass/vocals), Adam Todd (guitar/vocals) and Niall McCamley (drums). Could It Be Different? Is, well, different—it’s a collaborative album of personal storytelling that works through life’s hardships with positivity—even at their most beaten down, The Spook School manage to find hope free of naivety. That’s clear the second the album opens with “Still Alive,” and its ascending chorus (and soon-to- be crowd favorite) of “F You, I’m Still Alive,” written by Nye after surviving an emotionally abusive relationship. The song avoids villainizing the past, instead, it celebrates the present and welcomes the unknown future.

Could It Be Different? is a human release—a record full of the insecurities and anxiety that arrive after self-awareness, in learning something new and potentially frightening about yourself. But at it’s heart is joy—there’s no desolation on the LP, because The Spook School manage to find light in moments of darkness. All things glum must pass—even if hope comes only in the form of acceptance.

“We try to take sad songs and not shy away from them, but come out thinking ‘things will change.’ Otherwise everything would be dreadful and I feel bad enough as it is,” Niall laughs. “We need a bit of light in our lives.” Adam agrees, “We started this for fun. We want our shows to be fun. We want the people who come to our shows to feel welcomed, and to have fun. There’s a bit of party in our songs, no matter what the subject matter is.” Why cry when you can dance? FACEBOOK.

'Less Than Perfect' is a feisty indie rocker, with gorgeous vocals and harmonies backed by some crisp and determined music. With more to follow early next year this is a tasty appetiser. 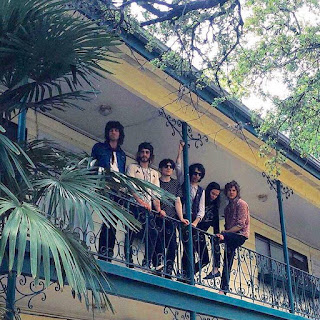 Background - Chicago’s Lucille Furs play psychedelic rock and baroque pop in a tradition that dates back to the 60s and is championed by contemporary bands like Temples, The Horrors and Tame Impala.

The original band name was Shah Jahan, however they rebranded themselves with a name that Trevor Newton Pritchett threw out in a brainstorming session. Patrick Tsotsos stated in an interview earlier this year that the change to Lucille Furs stemmed from some listeners taking offense to the initial name (something they had no intention of doing).

From Lucille Furs self titled and totally inoffensive (see above) album I have chosen a couple of songs  'Pink Noise' and 'The Fawn of Teal Deer'. They are both pretty different, something that is a hallmark of this fabulous album, and collectively provide a clearer indication of what to expect. Baroque pop & psychedelic rock are equally presented within this collection of songs, with a modern twist and some timeless feeling.